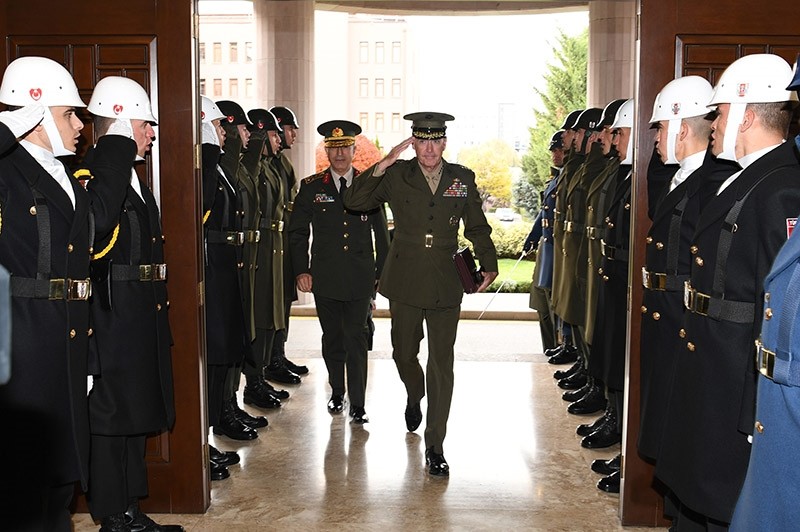 Ankara and Washington have signaled enhanced cooperation in the fight against Daesh in Syria, an issue which had stalled during the Obama administration. The former administration at the White House utilized the PKK terrorist organization's Syrian offshoot, the Democratic Union Party (PYD), as their most effective partner in their anti-Daesh campaign. The U.S. partnership with the PYD became a major disagreement between Ankara and Washington, a dispute which President Recep Tayyip Erdoğan has discussed with newly-elected President Donald Trump and hopes to overcome by increasing cooperation between Turkey and the U.S. in Syria against Daesh.

During his visit to the ministerial meeting at NATO Headquarters in Brussels, Defense Minister Işık told reporters that Gen. Dunford's visit will include important talks on possible military operation into the Daesh stronghold of Raqqa. Işık said the U.S., France and the U.K. place a high priority on the Raqqa operation, but such a military move should not include "a terror group to eliminate another terror group."

"The operation should not include the PYD but the people of the region. In this regard, we are ready to give all our means in support," he said, adding that the U.S. is currently not in a position to classify the PYD as their sole option. "They have not made a decision yet and I believe scheduled meetings will help them make a decision on this matter."

Meanwhile, the Foreign Minister Mevlüt Çavuşoğlu met with his U.S. counterpart Rex Tillerson at the meeting of G20 foreign ministers in Bonn, Germany.

Turkey, the U.S. and the EU recognize the PKK as a terrorist organization. The EU and the U.S., however, do not categorize the PYD or the People's Protection Units (YPG) as such, even though Turkey strongly opposes any PKK-affiliated groups south of its border, both in Iraq and Syria, saying it constitutes a national security threat to its borders.

After Donald Trump's election to the U.S. presidency, Turkey expressed several times that it hopes the new president "does not make similar mistakes against its NATO ally as the Obama administration did." Ankara has also expressed its expectation that the U.S. stop arming and cooperating with the PKK-affiliated PYD and its armed wing the YPG, reiterating that there cannot be a distinction between good and bad terrorist organizations.

Commenting on his meeting with U.S. Secretary of Defense James Mattis, Işık said his American counterpart expressed that they will increase their support to Turkey in its fight against the PKK. Mattis also stated that the U.S. will support Turkey's cross-border Operation Euphrates Shield.

"Until the al-Bab operation comes to an end, we expect the PYD/YPG elements to leave Manbij. We are working with the U.S. on this matter, but at this point we do not have the result we are looking for," Işık said.

He also noted that the Trump administration has not yet provided any information on where they are planning to establish safe zones in Syria and the issue will be discussed in the upcoming meetings. Işık also noted that Turkey has completely besieged the northern Syrian city of al-Bab and is working collaboratively with the Free Syrian Army (FSA) to clear the city center.

Speaking to Daily Sabah about the meeting, Kyle W. Orton, a Middle East analyst with the U.K.-based Henry Jackson Society, said that it seems the Trump administration has not yet determined a policy on Syria, but they are clearly keen on quickly pushing Daesh out of their urban strongholds and they are also more conscious of Turkish concerns about the PYD and the PKK than the Obama administration. One possible way of bridging that gap is with additional American troops, though this still leaves the problem of developing a long-term "hold" force. "Ultimately, beyond the U.S. reconsidering the Turkey-PKK balance in its anti-Daesh strategy, it is difficult to say with any certainty how or if the U.S. will change course."

Yesterday, Chief of General Staff Gen. Hulusi Akar reportedly said that the operation to liberate the northern Syrian town of al-Bab from Daesh terrorists has almost been completed and Turkish troops are working to clear mines and explosives, Turkish Sabah daily's Ankara Bureau Chief Okan Müderrisoğlu reported. According to Müderrisoğlu, Gen. Akar told journalists accompanying President Recep Tayyip Erdoğan on his three-day visit to the Gulf that the al-Bab operation finished and explosive ordnance disposal teams are currently working to clear the region. Müderrisoğlu quoted Akar as saying that two large bomb-traps had been successfully detonated, and other bombs and mines are being cleared.Also President Erdoğan said on Sunday that the Turkish military and Free Syrian Army (FSA) would go on to liberate Manbij after al-Bab, a town held by the PYD, and Daesh-held Raqqa.

The idea is one of several ideas the Pentagon is considering after President Donald Trump gave defense officials until the end of the month to come up with proposals to speed up the war against Daesh.

A U.S. official, speaking on the condition of anonymity, said the United States already had a small number of special operation troops in Syria. The official added that the review was still underway and no options had been presented to Trump.

"It's way, way speculative," the official said of the report.

CNN said the proposal was not fully developed and was one of several ideas being considered.

In the meantime, the military said announced yesterday in a statement that Turkish airstrikes and shells killed 15 Daesh terrorists as part of the operation to liberate al-Bab from terrorists. A total of 258 identified targets were shelled by the Turkish military, including some shelters, possible defense positions, and tunnel entries used by Daesh terrorists. Turkish warplanes also hit 20 Daesh targets, destroying 15 buildings used as shelters, two headquarters, two arsenals and one bomb-laden vehicle belonging to the terrorist organization. The Turkish military continues to take all the necessary measures to ensure the safety of civilians in the area, the statement added. The Turkish army is supporting FSA fighters in liberating al-Bab, a strategic city for Daesh, from the terrorist group. Thursday marks the 177th day since the city was surrounded in order to liberate it.

*Contributed by Mehmet Solmaz from Brussels and Mustafa Kırıkçıoğlu from Istanbul