Turkey's next target after al-Bab is Manbij, Erdoğan says 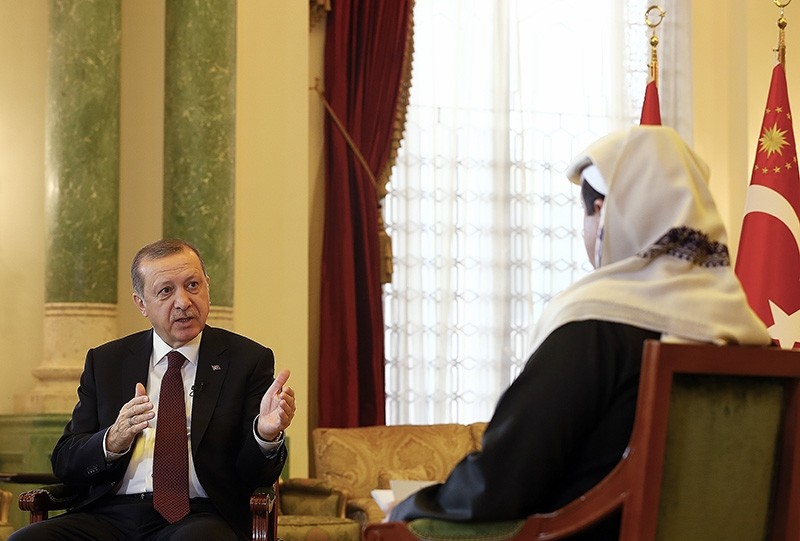 Turkey's next target after al-Bab's liberation is the Syrian town of Manbij, and it is crucial to clear PKK's Syrian-offshoot Democratic Union Party (PYD) from the area, President Recep Tayyip Erdoğan said on Friday.

In an interview with Saudi news channel Al Arabiya, Erdoğan said that PKK's Syrian-offshoot People's Protection Units (YPG) and PYD, which are still in Manbij, need to be cleared as soon as possible because the area is demographically dominated by Arabs.

"We've told the Obama administration before that Manbij needs to be handed over to the Arabs and they told us that the PYD/YPG was leaving, but unfortunately they never left" Erdoğan said and added that after Manbij, Raqqa is the only Daesh stronghold in Syria.

Ankara considers the YPG a terror group, an offshoot of the outlawed PKK, which is itself listed as a terror organization by the U.S., Turkey and the EU. Turkey has voiced concerns over the YPG moving into Manbij, which has a predominantly Arab population. Turkey has also warned against YPG's aim of making demographic changes in areas captured from Daesh. Meanwhile, the YPG presence has become a matter of political friction between Ankara and Washington. Ankara argues that U.S. support to the Syrian Democratic Forces (SDF), predominantly led by the YPG, is eventually transferred to the PKK and ultimately used against Turkey.

On Aug. 24, Turkey launched Operation Euphrates Shield to clear the towns of Jarablus, al-Rai and al-Bab from Daesh, while preventing the YPG from extending its control over these towns.

He highlighted that in Raqqa Turkey would cooperate with the U.S.-backed coalition forces to liberate the town from Daesh, which would ensure peace to be established in the region.

Erdoğan continued by saying that the support of Gulf countries and Saudi Arabia is crucial to handle the ongoing crisis in the region, as he emphasized millions of refugees who have fled their homeland. In this regard, he reiterated the importance of creating a terror-free zone between Jarablus and al-Rai in northern Syria, where local forces could be trained and equipped.

"I discussed this issue with my Saudi friends, U.S. and EU officials" Erdoğan said, adding that he suggested the terror-free zone could also provide opportunities for people to safely return to Syria.

In response to a question about Daesh terrorists 'being friends of some states,' Erdoğan said once again that Daesh has nothing to with Islam. Although he did not specify any names of countries, he noted that it is evident the terrorists receive significant financial support, highlighting that this also applies for other terrorist organizations such as Boko Haram, al-Qaida and al-Shabab, as they all use foreign-made weapons to kill people.

The president said that Turkey's fight against Daesh will continue with determination and that Turkey will never allow the PYD/YPG to establish a state in northern Syria.