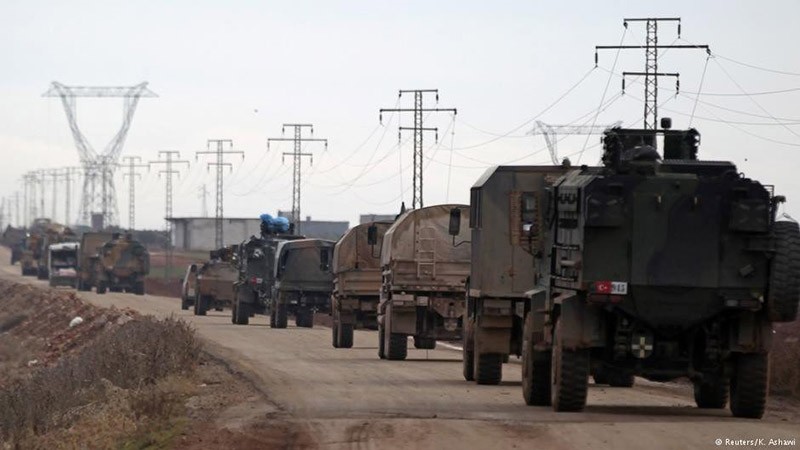 In this file photo, a column of Turkish military vehicles are seen advancing towards the town of Al-Bab in northern Syria. (AA Photo)
by Daily Sabah Feb 17, 2017 12:00 am

The Turkish military has succeeded in removing Daesh terrorists from the northern Syrian town of al-Bab after a months-long operation in the area.

The Turkish Armed Forces (TSK) said on Friday that the Turkish military, in cooperation with the Free Syrian Army (FSA), has taken control of most of the town. A written statement released by the military said there are ongoing operations within the town to clear the remaining Daesh elements.

The Turkish army has killed 166 Daesh terrorists from Feb. 9-15 and destroyed 236 targets, the statement added. It added that Daesh's resistance has been crippled to a great extent and the al-Bab operation is near completion.

The military statement asserted that one of the priorities of the army is to establish a peaceful and terror-free environment for civilians in the area. "The Turkish Armed Forces [TSK] has taken all kinds of measures to prevent civilians living in the area from getting hurt at every phase of Operation Euphrates Shield and it continues to do so," it added.

The army also said that Turkish troops are continuing to take the necessary measures against possible threats from the PKK's Syrian offshoot the Democratic Union Party (PYD)-held Afrin and Manbij.

Stressing the collaboration between the Turkish military and the U.S.-led coalition as part of Operation Euphrates Shield, the military said the determination to work together continues.

"Now al-Bab is completely surrounded. A serious cleaning operation is being done inside [the city]," Defense Minister Fikri Işık said recently. "There is a very intense operation to clear al-Bab's city center of Daesh elements. The Free Syrian Army and the Turkish Armed Forces have been conducting [operations] together," he told reporters at a news conference on Thursday.

The FSA, backed by the Turkish-military, could turn its attention to the Syrian towns of Afrin and Manbij, which are under the control of the Democratic Union Party (PYD) after the al-Bab offensive.

Also, Ankara could target Daesh's so-called capital Raqqa from now. On Feb. 12, President Recep Tayyip Erdoğan said the ultimate aim of Operation Euphrates Shield is to clear terrorists from the town of al-Bab in northern Syria before moving on to Raqqa and Manbij.

"We are trying to eliminate terror from the region. That aim is about to be completed in al-Bab before we move on to Raqqa and Manbij. Our ultimate goal is to clear Daesh from the region. As of now, Daesh's actual center is Raqqa," Erdoğan said.

While Ankara seeks to move on to Raqqa and liberate the city from Daesh, the PYD's armed wing the People's Protection Units (YPG) could be on its way to the city center shortly. The YPG is backed by the U.S.-led coalition as well. It remains a question whether Ankara will cut a deal with the U.S.-led coalition to launch an offensive against Raqqa in the near future.
Last Update: Feb 17, 2017 5:29 pm
RELATED TOPICS