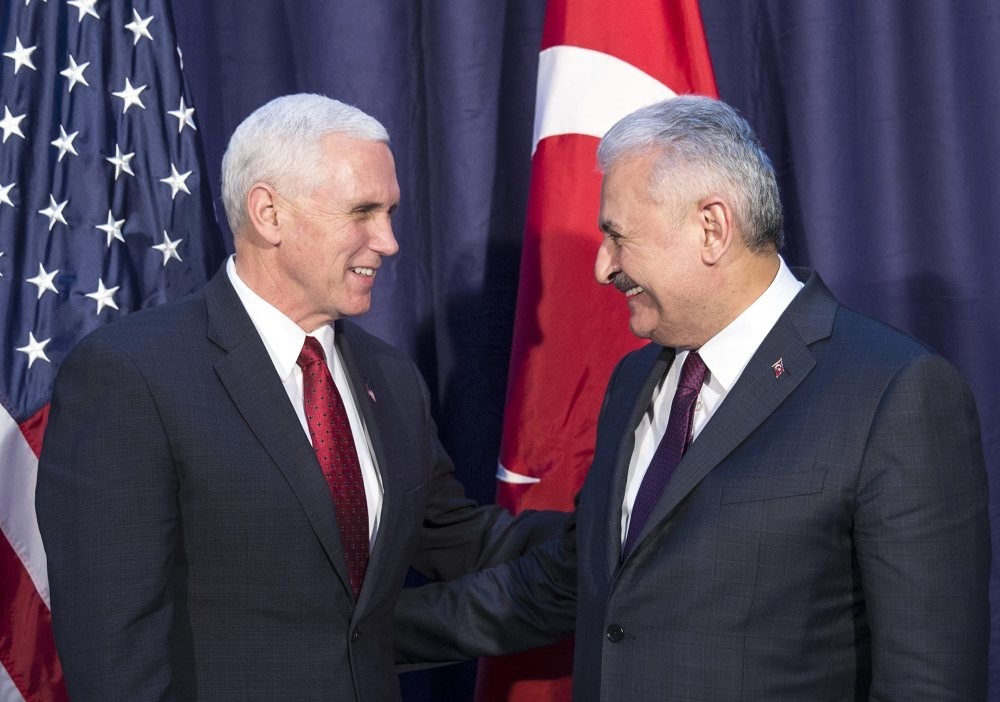 Prime Minister Binali Yıldırım stated that Turkey and the FSA can carry out an ‘al-Bab' like operation to retake Daesh-stronghold Raqqa, following his meeting with US Vice President Mike Pence in Munich

Prime Minister Binali Yıldırım said Sunday that the extent of involvement of the Turkish Armed Forces (TSK) in a military operation to seize the Daesh-stronghold of Raqqa will be the same as it was in al-Bab.

Speaking at a press conference on the last day of the 53rd International Munich Security Conference, Yıldırım said Turkey has already had military elements that support the Free Syrian Army (FSA) in the region, particularly in al-Bab, since Operation Euphrates Shield began on Aug. 24 last year, adding that Turkey will probably support the FSA in the Raqqa operation, as well.

The prime minister responded to questions regarding the extent of Turkish involvement in the Raqqa operation, underscoring that it is not true that the Turkish military will only provide tactical support to the local Gendarmerie forces, saying: "Whatever our involvement was in al-Bab, it will be the same in Raqqa. We already have troops in the region backing the Free Syrian Army forces. Most likely they will be the ones supporting them. We are opening new page with the U.S. administration. They are calling it 'a new day,'" he said.

In Syria, Turkey wants to see the U.S. end its support for the Democratic Union Party (PYD) and its armed wing, the People's Protection Units (YPG), both affiliated with the PKK which has waged war on Turkish soil since 1984 and is listed as a terror organization by Turkey, the U.S. and EU.

"We told them that using PYD/YPG elements to fight Daesh is not the right method of fighting," Yıldırım said. "It is not right to use a terrorist group to fight another terrorist group. Hence, the job needs to be carried out in a way befitting the strategic partnership, the NATO alliance. I believe they will show consideration our sensitivity in this regard."

Saying that the U.S. is reconsidering its ties to the PKK/PYD, the prime minister noted: "They are in an evaluation process," adding, "We should wait for the result. I guess they will review their position and reach a decision soon."

The prime minister also said that al-Bab was "under control now," adding: "The sweeping operation is underway but there are so many difficulties. There are tunnels under the city, suicide bombers, but the important thing is that their supply route was cut by the [FSA and Turkish] forces." The next target will be Manbij, a town that lies 30 kilometers (19 miles) to the west of the Euphrates River and is currently held by the PKK/PYD, Yıldırım said. "Our view to Manbij is clear. The city should be cleared of PYD elements. We are evaluating this differently than the fight against Daesh."

The U.S. has promised that PKK/PYD forces would be moved to the east of the Euphrates but this has not yet been implemented, Yıldırım said.

On Syria's future, the prime minister repeated Turkey's position that Syrians must determine their own destiny.

Turkey, Russia and Iran have brokered talks in the Kazakhstan capital of Astana to reinforce the Syrian cease-fire introduced in the new year, in addition to the U.N.-backed peace talks in Geneva.

He added: "There should be a solution that allows Syrians to decide their own fate, their own regime. The most important thing is to avoid sectarian conflict… All ethnic groups in Syria have a right to speak. We care about territorial integrity in Syria. Syrians should choose their government model. It should not be imposed on them by outside forces. Arabs, Kurds, Nusayris,Yazidis and Turkmens have the right to speak on this model."

Turkey launched Operation Euphrates Shield on Aug. 24, 2016, declaring that is was exercising its right of self-defense codified under the U.N. Charter Article 51. Tuesday marks the 176th day since the city was surrounded.

A National Security Council press release on Nov. 30, 2016 stated that the operation's objectives were to maintain border security and confront Daesh terrorism within the framework of the U.N. Charter. It also emphasized not allowing the PKK terrorist organization along with its affiliates, the PYD-YPG, to establish a terror corridor leading to Turkey's doorstep.
RELATED TOPICS