Afghanistan to hand FETÖ-linked schools over to Turkey 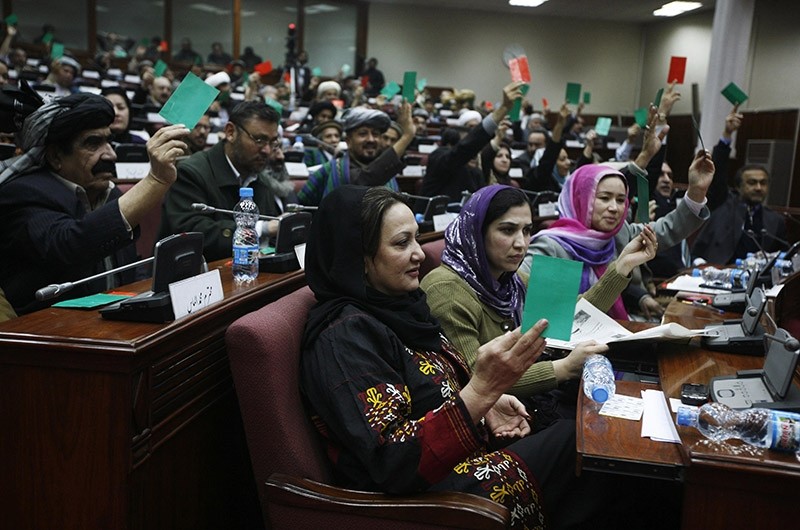 Afghan parliament members vote during a debate in Kabul, Afghanistan. (AP File Photo)
by Daily Sabah with AA Mar 05, 2017 12:00 am

The Afghan government has officially initiated a two-week long process to hand over to Turkey sixteen Afghan-Turk schools linked to the Gülenist Terror Organization (FETÖ).

Following the July 2016 failed coup in Turkey, Ankara asked Kabul as well as a number of other capitals around the world to hand over the network of schools in their countries linked to the coup plotter, FETÖ.

Afghan Deputy Education Minister Shafique Samim told a press conference late Saturday that Afghan President Mohammad Ashraf Ghani received a formal request from Turkey in this regard six months ago. He added Ghani was against closing down the schools, and instead approved a recommendation to hand them over to Turkey's Maarif (Education) Foundation.

The Maarif Foundation was established after July 2016 coup attempt to take over the administration of overseas schools linked to FETÖ, which is behind the defeated coup.

An estimated 8,000 boys and girls are enrolled at some sixteen Afghan-Turk schools located in major urban centers like the capital Kabul, Kandahar, Herat, Mazar-e-Sharif, Jalal Abad and Sheberghan cities.

According to Samim, the Maarif Foundation has pledged to invest up to $5 million to further lift the standard of the schools.

Mucip Uludağ, Turkey's Maarif Coordinator in Afghanistan said on Sunday that the reformed Afghan-Turk schools would offer the best quality education to Afghan students, including scholarship opportunities in Turkey.

He vowed the new management would adopt an inclusive policy to allow all Afghan children a chance to seek quality education, unlike the previous discriminatory policy of only enrolling children from the elite class.

Several countries, including Pakistan and African countries such as Senegal, Guinea, alread took the decision to transfer FETÖ-linked schools to Maarif's foundation.

FETÖ runs an extensive network of schools and institutions across several countries scattered around the world , which, according to Turkey, have a hidden agenda of infiltrating state institutions and gaining influence over state authorities.