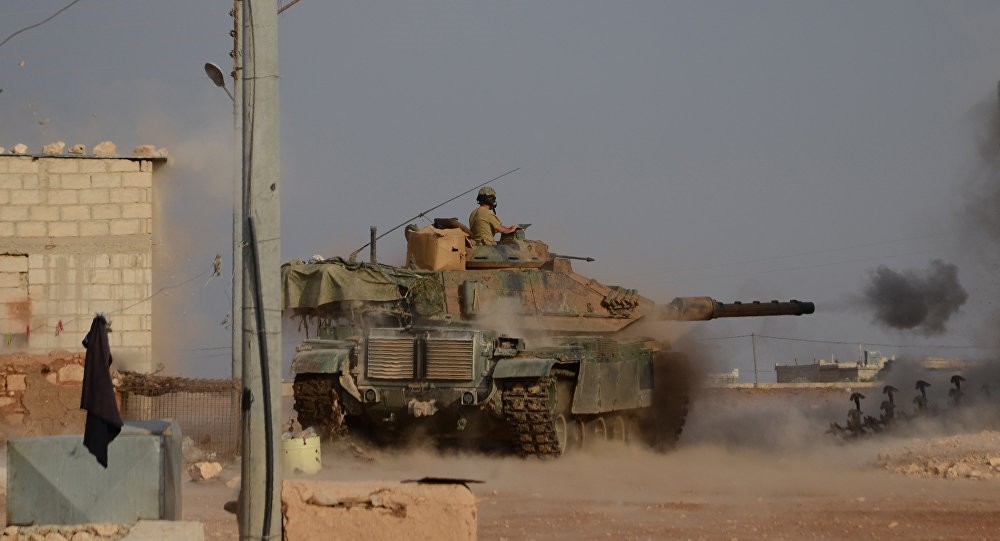 Turkish soldiers firing an upgraded M60 tank during fighting alongside members of the FSA against Daesh near the northern Syrian village of Beraan, northern Aleppo on Oct. 24, 2016.
by Yunus Paksoy Mar 06, 2017 12:00 am

Regarding the PKK-linked YPG handing over the western part of Manbij to the Assad regime, PM Yıldırım said, Turkey supports the decision, restating Ankara's insistence on the presence of Syrians in northern Syria instead of terrorist groups such as the YPG

Ankara seems content with the handover of the northern Syrian town of Manbij from the PKK's Syrian offshoot, the Democratic Union Party (PYD) to the Bashar Assad regime, as it has long asserted that the town belongs to Syrian Arabs and objecting the terrorist group's presence in the area.

After the handover of Manbij was announced earlier last week, Prime Minister Binali Yıldırım ensured that the development is not detrimental to Turkey's interests.

"The Syrian regime's takeover of Manbij is not a negative development for Turkey," he told a Sabah daily columnist on Saturday.

The Russian General Staff confirmed on Friday that regime forces overtook the northern Syrian town of Manbij, currently held by U.S.-supported Syrian Democratic Forces (SDF), which is dominated by the People's Protection Units (YPG), the armed wing of the PKK terrorist group's Syrian offshoot, the PYD.

Commenting on this issue the following day in an interview with Okan Müderrisoğlu, Prime Minister Yıldırım said that Turkey does not want a YPG presence in Manbij, so the regime's takeover was not a negative development for Turkey.

"The latest information we have about Manbij is that regime forces entered the city, and the YPG is leaving. This is not a negative development for us. We don't want a YPG presence in Manbij," Yıldırım said. ''After all, Syria belongs to Syrians."

Sergey Rudskoy, chief of the Russian General Staff's main operations department, said in a press conference that as a result of negotiations, the PYD accepted handing over Manbij and its surrounding area to the Assad regime.

It seems that Turkey's possible plan to move towards Manbij with the Free Syrian Army (FSA) is off the table for the time being, Dr. Bora Bayraktar of the International Relations Department at Istanbul Kültür University Department said.

Defense Minister Fikri Işık said in a speech in Turkey's Balıkesir that Daesh had first retreated from several areas in anticipation of the regime's takeover, and now, the YPG is retreating from other areas to make way for the regime.

"This is in fact a development that proves our claim on the regime, the PYD and Daesh cooperating at times," Işık said.

The prime minister also said that Turkey has no contact with the Syrian regime.

"We don't have any contact with the Syrian regime with an aim to have discussions about the future of Syria. For us, it's also not right to have these talks, and we are not planning to have any in the future. Russia and Iran have direct contacts in this matter," Yıldırım said, while pointing out that the main aim of the Geneva peace talks is to establish a permanent peace.

The professor contended that Turkey could shell the PYD in the north, starting a new offensive from there.

In November, President Recep Tayyip Erdoğan hinted at the possibility of an offensive against the PYD's armed wing, the People's Protection Units (YPG), in Manbij.

"It [the liberation of al-Bab] is not enough. We will march toward Manbij. Why? Because the YPG is there," Erdoğan said.

Bayraktar argued that the images showing armored vehicles with U.S. flags in northern Manbij and Russian flags in western Manbij prove that the PYD is a card that everyone plays in Syria.
RELATED TOPICS