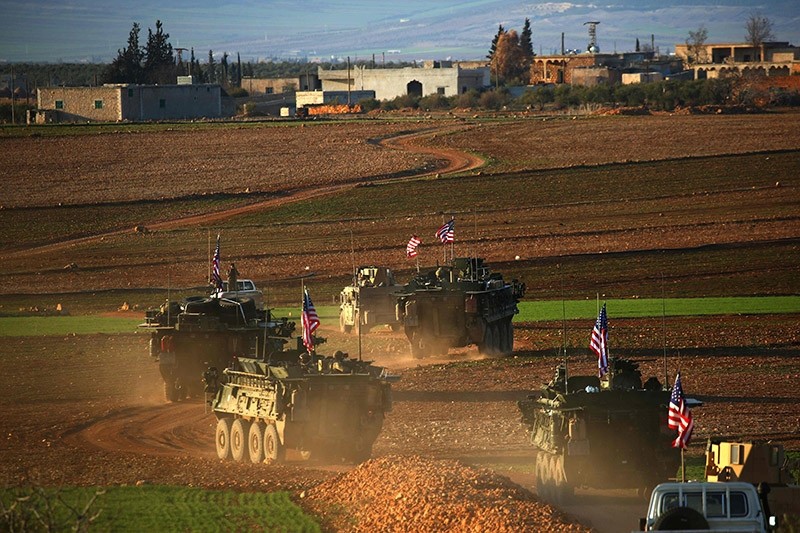 A convoy of US forces armoured vehicles drives near the village of Yalanli, on the western outskirts of the northern Syrian city of Manbij which is currently controlled by YPG terrorists, on March 5, 2017. (AFP Photo)
by Daily Sabah with Reuters Mar 06, 2017 12:00 am

The northern Syrian city of Manbij is under the protection of the U.S.-backed Syrian Democratic Forces (SDF), which is dominated by the PKK's Syrian affiliate YPG, a YPG-linked militia group announced on Sunday, dismissing Russian claims that the city will be handed over to Assad regime.

The statement came after Russian General Staff had claimed last Friday that an agreement was reached between the Assad regime and the YPG for the peaceful transfer of Manbij's control to the Assad regime forces.

Turkey, which launched Operation Euphrates Shield on August 24 to back the Free Syrian Army (FSA) against terrorist groups [including the PYD/YPG and Daesh] alongside its Syrian border, successfully cleared Manbij from Daesh terrorists and declared last week that the next target would be to liberate YPG-controlled Manbij.

Turkish Foreign Minister Mevlüt Çavuşoğlu said on March 2 that Turkey will strike the YPG if the latter does not withdraw from Manbij, which was promised to Turkey several times by the U.S. over the past months.

Turkish authorities had welcomed the Russian statement that the Assad regime would take the control of Manbij, with Prime Minister Binali Yıldırım saying that Ankara was content over the regime replacing the PYD in Manbij.