Defence Minister Işık: Turkey will prevent unification of PYD cantons at all costs 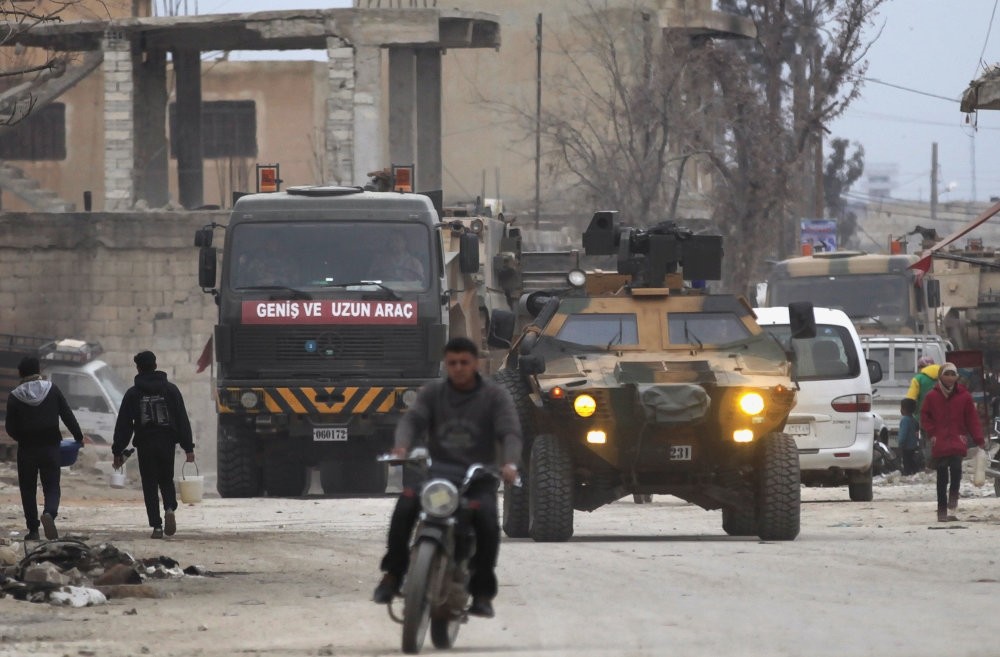 Turkish military vehicles drive in the Syrian rebel-held town of al-Rai, as they head towards the northern Syrian town of al-Bab, Syria March 2, 2017.
by Daily Sabah with Agencies Mar 07, 2017 12:00 am

Ankara has reaffirmed its position against the establishment of the PYD terror group's cantons in northern Syria saying Turkey will take all the necessary steps to prevent them. Defense Minister Fikri Işık said Turkey will not allow the PKK-linked group to have sovereign zones along Turkey's southern border

Defense Minister Fikri Işık said Turkey will prevent the unification of the Democratic Union Party (PYD) cantons in Syria at all costs. The PYD is an offshoot of the PKK. "Turkey will definitely not allow the PYD to have sovereign zones. Turkey's stance is also clear about the formation of the PYD cantons in Syria. Turkey will prevent the unity of the PYD cantons at all costs. We will continue our struggle in this regard," Minister Işık said on March 5 in Turkey's western İzmit province. Minister Işık also added that Turkey aims to establish safe zones for humanitarian purposes through the help of the ongoing Operation Euphrates Shield.

"We are trying to establish safe zones in Syria to provide a safe return for our Syrian brothers, who are currently staying in Turkey as our guests," Işık said. "Thus, we are trying to restore their cities with infrastructure. As Turkey, we want our Syrian guests to be able to return to their homes safely and to live in their homeland in peace," he added.

Stressing the recent developments in Manbij that demonstrated the PYD's cooperation with Daesh, Minister Işık said that their first priority will be to prevent the expansion of the PYD-controlled areas in the region.

"Turkey is the only country in the world that fights against, not only the PKK, but also its affiliate in Syria the PYD, as well as Daesh, far-leftist groups and the Gülenist Terror Group (FETÖ), which infiltrated our government. We are currently experiencing an era in which we have made the most significant progress against the PKK terror group in our 35 years of counterterrorism. Since July 23, 2015, 9,600 PKK terrorists have been eliminated. This is one of the greatest strikes ever against the terror group," he added, stressing that Turkey continues its active combat against multiple terror groups.

Işık added that Turkey is determined to completely eliminate terror threats wherever they may be, while confirming that a 2,200-square-kilometer (849-square-mile) area has been completely cleared of the Daesh terror group in northern Syria after the success of Operation Euphrates Shield.

The northern Syrian city of Manbij is under the protection of the U.S.-backed Syrian Democratic Forces (SDF), which is dominated by the PKK's Syrian affiliate the People's Protection Units (YPG), a YPG-linked militia group announced on Sunday, dismissing Russian claims that the city will be handed over to the Assad regime.

The statement came after the Russian General Staff claimed last Friday that an agreement was reached between the Assad regime and the YPG for the peaceful transfer of Manbij's control to Assad's regime forces.

Turkey, which launched Operation Euphrates Shield on Aug. 24 to back the Free Syrian Army (FSA) against terrorist groups — including the PYD, YPG and Daesh — along its Syrian border, successfully cleared Manbij of Daesh terrorists after it declared last week that the next target would be to liberate the YPG-controlled Manbij.

On March 2, Foreign Minister Mevlüt Çavuşoğlu said Turkey will strike the YPG if the latter does not withdraw from Manbij, which was promised to Turkey several times by the U.S. over the past few months.

Turkish authorities had welcomed the Russian statement that the Assad regime would take control of Manbij, with Prime Minister Binali Yıldırım saying that Ankara was content with the regime replacing the YPG in Manbij.

The terrorists from the PKK's Syrian affiliate People's Protection Units (YPG) have shelled the positions of Turkish soldiers with mortars in the countryside near Syria's al-Bab, wounding four servicemen.

The injured Turkish soldiers are reportedly specialized sergeants who had been transferred to Syria, under the scope of Operation Euphrates Shield, from the 49th commando brigade stationed in Turkey's Muş province.

The wounded servicemen were immediately taken to Turkish hospitals in Gaziantep and Kilis.
RELATED TOPICS