Turkey will strike YPG if it stands on way to Manbij, FM Çavuşoğlu says 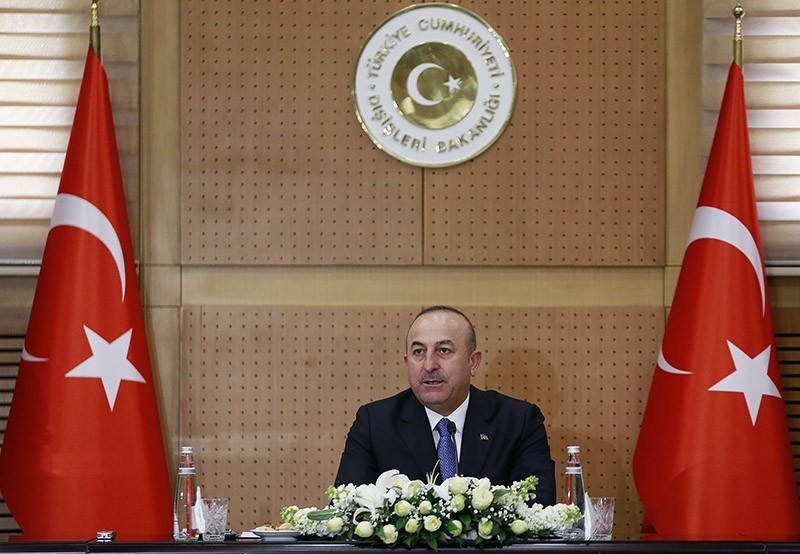 Foreign Minister Mevlüt Çavuşoğlu said Thursday in Ankara that Turkey is determined to strike the PKK's Syrian offshoot People's Protection Units (YPG) if the terrorist group stands on Turkey's way in the operation to free northern Syrian city of Manbij from the yoke of terror.

Çavuşoğlu said that the YPG is as dangerous and hostile as the Daesh group for Turkey, and that the country will never allow the terrorist group to unite its scattered cantons in northern Syria, referring to the YPG's aim to link up its Afrin Canton in northwestern Syria with the bulk of the territory it occupies in northeastern Syria.

In regards to the operation to free Syria's Raqqa city from Daesh terrorists, Çavuşoğlu noted that the U.S. seemed to be undecided and disoriented for the time being.

Turkey reiterated many times that it cannot tolerate the presence of an independent terrorist state on its Syrian border.

Operation Euphrates Shield was launched August 24, 2016, to clear Turkey's Syrian borders from terrorist groups, including the Daesh and the YPG.

In the meantime, Turkey asked several times the U.S. to not cooperate with the YPG-dominated Syrian Democratic Forces (SDF) against Daesh, reminding that a terrorist group cannot be fought with another terrorist group.

The U.S., continuing to run roughshod over the interests of its NATO ally, has so far dismissed the calls to cease its collaboration with the YPG terrorists, the Syrian affiliate of the PKK which is officially listed as a terrorist group by the U.S.

On several occasions, the U.S. pledged Turkey that the YPG will leave Manbij and return on the eastern bank of the Euphrates River; however, the promise has so far never materialized.

'We did not say Germany is Nazi'

During his meeting with journalists, Çavuşoğlu also spoke about the ongoing diplomatic standoff between Turkey and Germany, resulting from the latter's attempts to interfere in the internal politics of Turkey by barring government officials and Turkish ministers from meeting Turkish citizens in Germany.

''We did not say the current German administration is Nazi, we actually said that their practices are evocative of Nazi practices,'' Çavuşoğlu elaborated.

Over the past days, German local authorities had canceled several meetings, aiming to bring Turkish government officials together with Turkish citizens in Germany within the scope of the upcoming April 16 constitutional referendum in Turkey, scheduled in various parts of Germany by citing poor excuses such as the inadequacy of the parking lots or security concerns.

Turkish officials slammed Germany's hostile stance, saying that they were reminiscent of the fascist practices of 1930s.