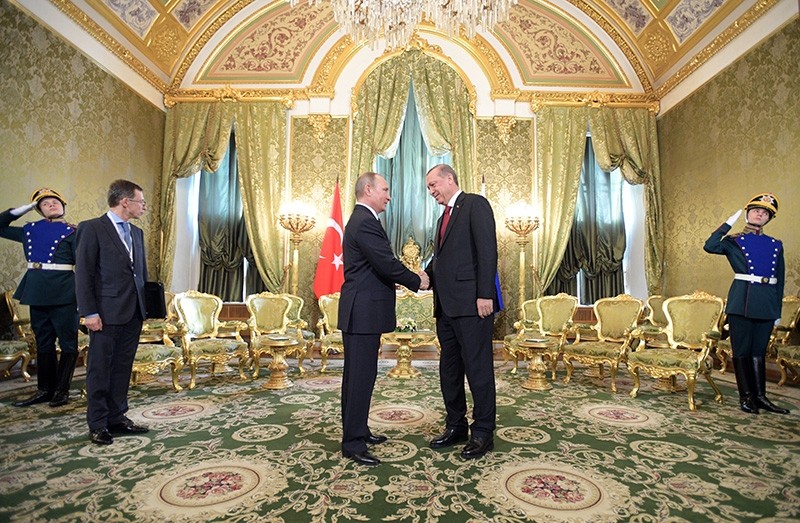 The two leaders met at the sixth summit of the Turkish-Russian High-Level Cooperation Council (ÜDİK), where they focused on the Syrian crisis, as the two countries have launched mediation efforts and coordinated military action in the war-torn country.

"It bears great importance that we [Turkey and Russia] act in close coordination in fighting terrorism," Erdoğan told reporters after the meeting, and urged a "determined" attitude against Daesh and all other terrorist organizations operating in Syria.

"In this respect, we particularly expect [Russia] to end the activities of the PYD, the PKK's Syria wing, in Moscow," he added.

Erdoğan said that during the one-on-one meeting with his Russian counterpart, they discussed Syria and the fight against terrorism.

"An important task falls on us to immediately ensure stability in Syria and stop the bloodshed," he said.

Erdoğan also thanked Russia for its precision on curbing the Gülenist Terror Group's (FETÖ) activities in the country. "I expect Russian officials to take the necessary steps against FETÖ members who secretly continue their activities in St. Petersburg and Moscow," he said.

The Turkish president further said Russia, as a member of Minsk Group that is mediating between Azerbaijan and Armenia, can have an influential role in finding a solution on the Nagorno-Karabakh conflict between the two countries.

"We are actively working to solve the most acute crises, first of all in Syria," Putin said as he greeted Erdoğan at the start of the talks. "I'm very pleased to note, and few seemed to expect it, that our military and special services have established such efficient and close contact." The Russian president said he was very pleased that interstate relations between the two countries are restoring rather quickly. "Many events have happened, and lately we have been working actively to bring the Russia-Turkey relations to the level worth our countries," he added.

At the beginning, Erdoğan said, "I believe the steps we will take in many areas like the economy, trade, military, and the defense industry will be the main topics of today's High-Level Cooperation Council meeting."

Regarding Turkey's anti-terror operations, Erdoğan said, "Operation Euphrates Shield has been the biggest blow to the Daesh terrorist group," adding that the Turkish Armed Forces (TSK) and the Free Syrian Army (FSA) have cleansed a total of 2200 square kilometers of territory in northern Syria from Daesh terrorists.

Responding to Erdoğan's remarks, Putin said "As Russia, we condemn any kind of terror activity as a principle. We also appreciate the close cooperation between Turkish and Russian intelligence services."

Erdoğan and Putin later had a closed meeting that lasted almost one-and-a-half hours.

The last meeting between Erdoğan and Putin was held in August, after Turkey and Russia patched up the fallout in the aftermath of the downing of a Russian jet over the Turkish-Syrian border.

Since the summer, Russia has relaxed the sanctions that were imposed on Turkey in response to the jet incident and the countries have worked together to bring a cease-fire and political solution to Syria.

Relations were tested in December when the Russian ambassador in Ankara, Andrey Karlov, was killed in capital Ankara. However, Putin declared the shooting a "provocation" designed to undermine relations between Turkey and Russia.