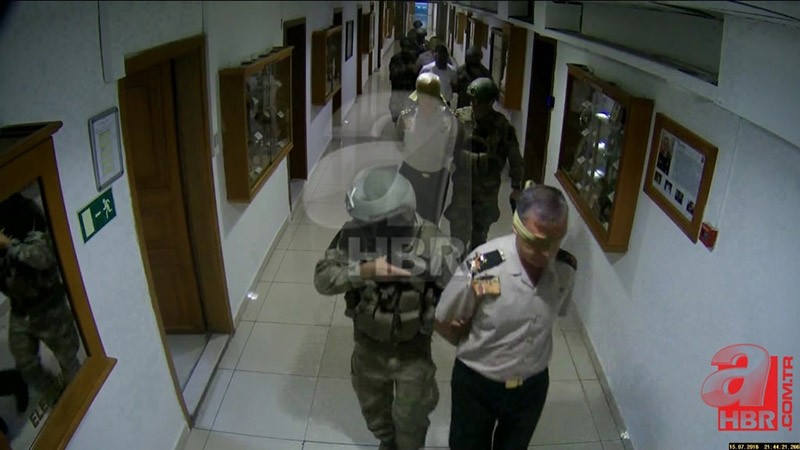 The brutal treatment of senior military officials by Gülenist Terror Group (FETÖ)-affiliated putschists at the Turkish General Staff Headquarters on the night of July 15 has been revealed by exclusive footage obtained by A Haber News Channel.

The footage shows that the coup plotters entered the headquarters at 9:22 p.m. local time, after realizing that their plans to take over were discovered by state officials.

Details of an indictment into the July 15 coup attempt had showed that a meeting between the country's intelligence and army chiefs led to members of the Gülenist Terror Group (FETÖ), who masterminded the putsch bid, to carry it out earlier than planned.

The indictment says the coup, which killed 248 people, was originally planned to start at 3 a.m. according to FETÖ members, but a general at the army headquarters told fellow coup plotters to reschedule it when he heard that FETÖ infiltrators in the army would be arrested that night.

According to the footage, putschists wait in ambush for Land Forces Commander Gen. Salih Zeki Çolak to arrive at the General Staff Headquarters and swoop down on him as soon as he's there. They immediately killed Gen. Çolak's Sergeant as he was trying to protect Çolak, and shot the guard commissioner who also resisted.

The putschists also put sacks on generals' heads and blindfolded them before they brought them to Akıncı Air Base, which was used as a headquarters by the coup plotters during the July 15 failed coup attempt.

Moreover, soldiers walking in the hallways of the headquarters are seen attempting to use their transmitters but are stopped by coup plotters, who kick their weapons and walkie-talkies.

Men without military uniforms are also seen in the footage, who direct and manage the soldiers implementing the coup attempt.

Military troops loyal to the government, along with police units and millions of Turkish citizens succeeded in quelling a coup attempt, launched by a small military junta linked to FETÖ.

Fetullah Gülen is the prime suspect in the main indictment, while Akın Öztürk, former commander of the Turkish Air Force and a member of the powerful Supreme Military Council, is accused of heading the Peace at Home Council of the putschists. The Ankara Chief Prosecutor's Office is asking for multiple life sentences for Gülen and Öztürk.

Gülen remains in the United States, where he settled in 1999. Thirty-seven members of the coup council and Gülen face a record 2,988 possible life sentences for the coup attempt that killed at least 248 people.