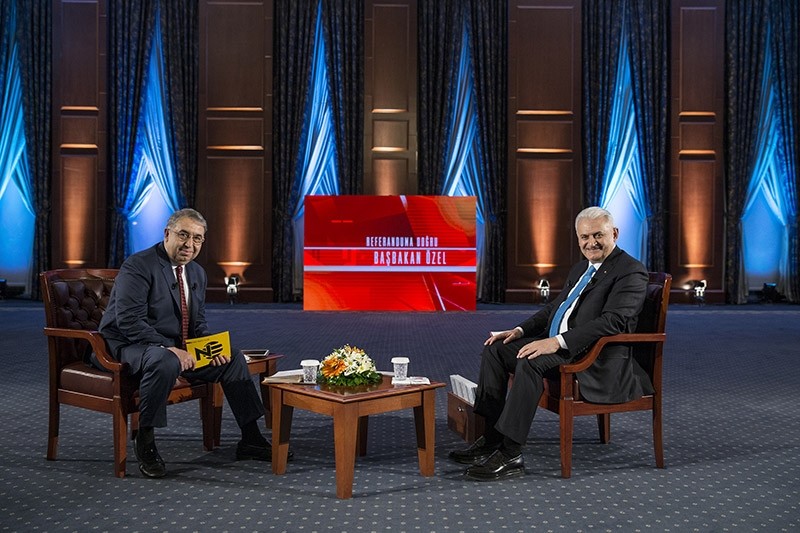 Ankara has announced that Operation Euphrates Shield, which was launched on Aug. 24, has come to an end after liberating more than 2,000 square kilometers of land in northern Syria from Daesh some 100,000 people living in Gaziantep province are now expected to return to al-Bab

Prime Minister Binali Yıldırım and the National Security Council (MGK) announced late on Wednesday that Operation Euphrates Shield has successfully come to an end after defeating Daesh in its strongholds and seizing more than 2,000 square kilometers (770 square miles) in northern Syria. Meanwhile, more than 50,000 more Syrians are to be relocated back to their hometowns, bringing the total number of returning refugees to 100,000.

Prime Minister Yıldırım said during a televised interview that, "From now on, if we take action against Daesh or anything else that threatens our security, it will be a new operation."

Yıldırım stated that if needed a new offensive would be undertaken and it would be named differently.

A statement from the National Security Council read that "Operation Euphrates Shield has been successfully concluded," after a four-hour meeting chaired by President Recep Tayyip Erdoğan at the Presidential Palace in Ankara.

Meanwhile, as the reconstruction of towns liberated from Daesh continue, about 100,000 of the refugees who live in Turkey's Gaziantep are to be relocated back to their hometowns.

Turkey's Gaziantep Mayor Fatma Şahin said about 50,000 Syrians were relocated back to Jarablus after it was liberated from Daesh, and the same will also be done for the residents of al-Bab once the infrastructure is rebuilt. Turkish humanitarian state institutions, as well as NGOs, helped to build and restore schools, hospitals, and bakeries to meet people's basic needs.

Ankara launched Operation Euphrates Shield last year on Aug. 24, backing Free Syrian Army (FSA) forces inside Syria and recaptured several towns near its border from Daesh, including Jarablus, al-Rai, Dabiq and al-Bab. The operation has dealt a heavy blow to the terrorist group's dominance in Syria.

Even though Daesh expressed its assertion in Dabiq, which it claimed would be the place for a doomsday war, the Turkish-military backed FSA forces captured the town in a short period of time. Similarly, the Ankara-backed forces defeated Daesh in its strategic stronghold, al-Bab, to cut off the PKK-affiliated Democratic Union Party's (PYD) armed wing, the Peoples' Protection Units (YPG) on the way to Afrin.

Having liberated Daesh-held towns and villages, Tukey accelerated efforts to improve the quality of life in the areas. The first steps toward normalization in the towns were taken by forming proper security units. Local assemblies consisting only of Syrians have also been established.

Local Turkish police department have trained 2,500 Syrians and distributed armored police vehicles. The number of trained Syrians joining security forces is expected to be as high as 5,000. Once order is established by Syrian police forces in previously Daesh-held towns, armed FSA fighters will leave the town centers.

In addition, the Turkish government is making an effort to enhance education levels. Daesh had turned schools into prisons and torture centers. But a majority of schools have re-opened and education recommenced shortly after the liberation of the towns. Likewise, the Ministry of Education is working to hire and send teachers to these towns.

Turkey's bid to liberate Daesh-held Syrian towns and bring peace to the region seems to have paid off. The population of Jarablus in northern Syria increased from 3,500 to approximately 35,000 people after Turkey-backed forces liberated the city from Daesh.

Another goal of Operation Euphrates Shield was to prevent the YPG from connecting its cantons in northern Syria. As the Turkey-backed forces dug around 30 kilometers deep into northern Syria, the YPG could not march from Manbij toward Afrin.

Despite the end of the operation, Ankara could eye new offensives toward PYD-held Afrin and Manbij. Turkish authorities previously announced that Afrin and Manbij would be targeted by Ankara-backed FSA forces following the liberation of al-Bab.

Regarding the fight against Daesh in Syria and Iraq, the MGK statement added that Ankara's allies' financial and military supplies to groups that are considered to be terrorists by Turkey would damage the country's friendly relations with them.

The YPG has been Washington's principle partner in the anti-Daesh fight in northern Syria, vexing Ankara. Turkey views the YPG as the Syrian offshoot of the PKK, which has been listed as a terrorist organization by Turkey, the EU and the U.S.

Regarding Ankara's concerns over the U.S. government's cooperation with the PYD/YPG terrorist organization in fight against Daesh, Turkish authorities urged the U.S. to make a choice between a NATO ally and a terrorist group. Washington, however, continued to work with the YPG.

Turkey has repeatedly warned against the YPG's aim of making demographic changes in areas captured from Daesh in northern Syria, a call ignored by the U.S. as it continued the support.

In October 2015, the U.S. airdropped almost 50 tons of ammunition in Syria's Hasakah. While the Arab opposition fighters said they did not receive it, PYD terror group leader Salih Muslim thanked the U.S. for the ammunition.

Recently, the U.S. once again sent ammunition, weapons and armored vehicles to YPG forces around Afrin and Manbij.