Protesters say ‘No to Terror, Yes to Peace’ in predominantly Kurdish Şemdinli district 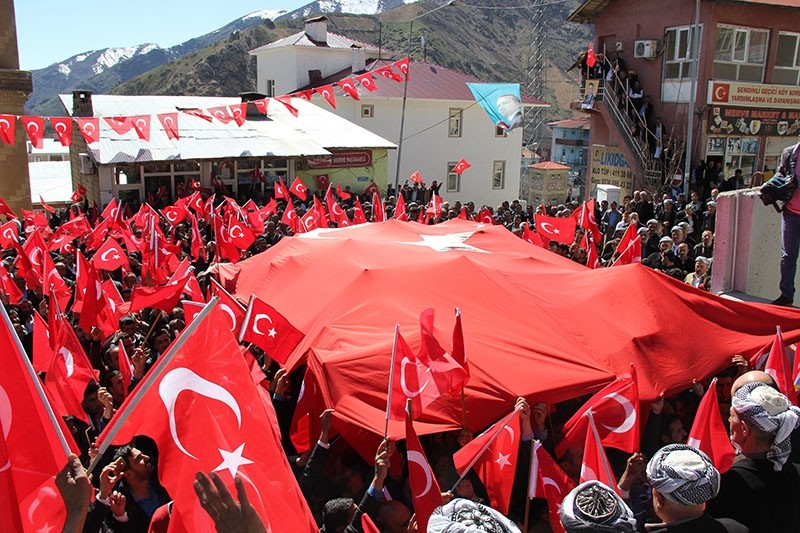 A large group of locals in the Şemdinli district of Turkey's predominantly Kurdish southeastern Hakkari province gathered Tuesday to protest against the PKK terror organization and the Gülenist Terror Group (FETÖ).

The group of protesters, including civil society groups and members of political parties, chanted "Down with PKK" while waving Turkish flags and holding a "No to Terror, Yes to Peace" march on Cumhuriyet Street in the town center.

Ziya Sözen, the president of Anatolia Security Village Guards and Martyrs' Families Confederation, thanked the residents who participated in the march, saying that he once again condemned the terror groups and their sympathizers.

"In the square we are in, I see the photos of the martyrs, Menderes Özer and Ahmet Budak. They have meaning for us. For years, the PKK terror group exploited emotions, and the Peoples' Democratic Party (HDP) has complained about not being able to do politics easily. However, Ahmet Budak's only fault was that he wanted to serve this nation and become a member of the parliament."

Sözen added that critics of the PKK were murdered for no reason in the name of protecting the Kurdish people. "Is this how you protect the Kurdish nation? This is what you mean by a Kurd?" he asked.

Ahmet Budak, formerly a candidate for a parliamentary seat for the ruling Justice and Development Party (AK Party), was killed in September 2016 in his hometown of Hakkari. Budak was entering his car when gunmen fired automatic rifles. He was then rushed to hospital after the attack while the gunmen fled the scene. He later succumbed to his wounds in hospital. Budak, a contractor, ran for the AK Party as the first-place candidate in the November 1 elections, but lost.

The PKK terrorists have long targeted AK Party politicians as well as anyone they deem to be critical opposition. PKK leader Cemil Bayık said last year in March that the PKK's main aim is to topple President Recep Tayyip Erdoğan and the AK Party government.