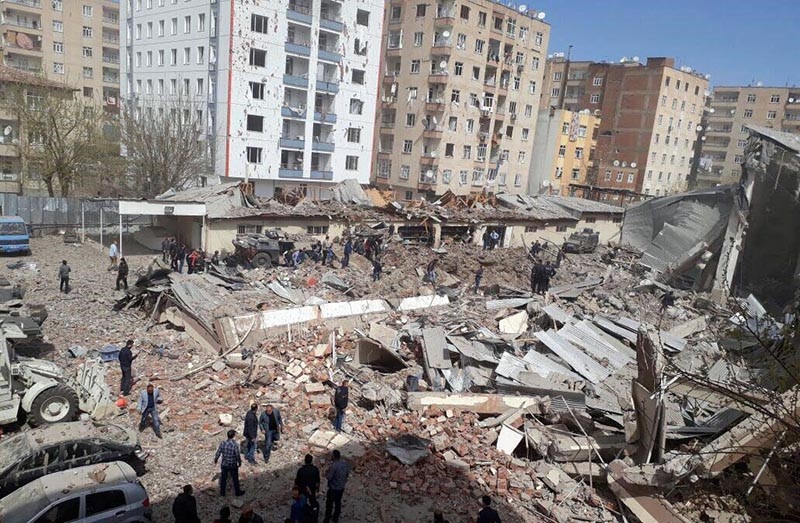 Authorities announced Wednesday that Tuesday's explosion in the southeastern province of Diyarbakır was the result of a terror attack and added that the death toll has increased to three.

The blast that took place at a repair shop inside police headquarters in the city's Bağlar district where armored police vehicles were being repaired killed a policeman and two civilian workers while it left 12 people injured.

Officials initially suspected the explosion, which left a huge crater at the site, was accidental, but Interior Minister Süleyman Soylu announced on Wednesday that it was a terror attack.

Although Soylu did not name a terrorist group behind the attack, it was most likely the work of the PKK which has been terrorizing Diyarbakır and its immediate vicinity for decades.

Speaking to Habertürk TV, the interior minister said the attack was first suspected to be the result of explosives planted by an infiltrator in the police headquarters, but they later discovered a tunnel dug beneath the blast site.

The minister said routine checks were carried out every month around police headquarters against such risks, but "apparently they dug it in a very short time."

In a statement yesterday, the Diyarbakır governorate announced that terrorists dug a 30-meter-long tunnel from a construction site across from police headquarters and planted about one ton of explosives composed of RDX, ammonium nitrate and TNT.

"The explosives were remotely detonated. Five suspects directly involved in the attack were detained, and 172 others linked to the terrorists are being questioned," the statement said.

Terror attacks in Diyarbakır and the wider southeastern region, which was once beset with terrorism, have been relatively scarce recently, especially in the aftermath of months-long counterterrorism operations last year.

Diyarbakır was the scene of a string of terror attacks and clashes between the PKK and security forces before the operations that dealt a huge blow to the terrorist group.

The PKK relaunched its campaign of terror in Diyarbakır and other southeastern cities last year.

The terrorist group, which occasionally employs car bombs and suicide bombers, often resorts to roadside bombs targeting security forces and civilians in southeastern and eastern cities, but Tuesday's attack was a display of the newest and perhaps most sinister tactic used by the PKK against security forces.