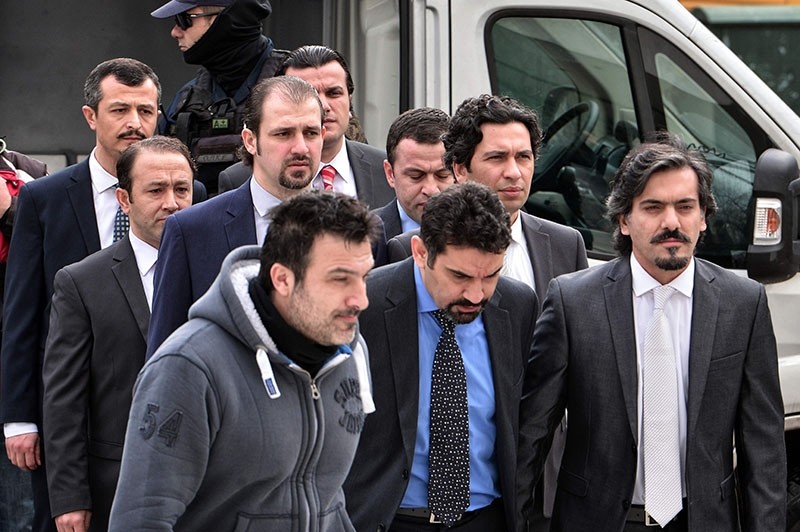 The eight Turkish army officers are escorted by Greek police as they arrive at the Greek Supreme Court on January 26, 2017. (AFP Photo)
by Daily Sabah with Agencies Apr 25, 2017 12:00 am

A Greek court ruled Tuesday against the extradition of three out of eight Turkish soldiers who fled to Greece last July following the failed coup attempt by the Gülenist Terror Group (FETÖ) against the Ankara government.

Greece's top court previously blocked the extradition of all eight soldiers in January, upon which Turkey issued a second extradition request.

When it became apparent that the coup attempt was to fail, the soldiers fled to Greece using a military helicopter.

After the July 15 coup attempt, eight soldiers, including two commanders, four captains and two sergeants, escaped to Greece on a Sikorsky helicopter and landed in Alexandroupolis. Following their landing, the eight suspected FETÖ members asked for asylum from Greek authorities. Before their asylum request was taken to the court, a Greek court sentenced the eight men to a suspended two-month jail sentence for illegal entry into Greece. Ankara has formally requested from Greece the extradition of the FETÖ members who were allegedly behind the coup attempt, to face trial in Turkey.

Led by U.S.-based imam Fetullah Gülen, FETÖ sought to topple the Turkish government and seize power on July 15 through a military coup and impose martial law.

In total 248 people, mostly civilians, were killed by pro-coup soldiers, while over 2,000 people were injured.