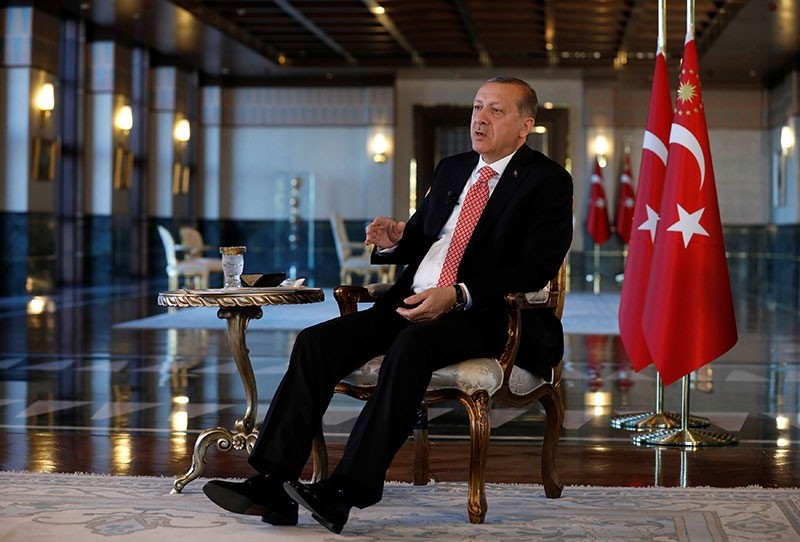 "We are obliged to take measures. We must take steps. We shared this with the U.S. and Russia and we are sharing it with Iraq as well," Erdoğan said in an interview in the presidential complex in Ankara.

"It is an operation that (Iraqi Kurdistan President Massoud) Barzani has been informed about."

He said he regretted the death of several members of the Iraqi Kurdish peshmerga forces, also deployed in Sinjar, during the Turkish operation and made clear that Turkey's action was "absolutely not an operation against the peshmerga."

Around 70 PKK terrorists and militants of its Syrian offshoot the People's Protection Units (YPG) have been killed in Iraq's Sinjar and northern Syria in Turkish anti-terror operations, military sources said Tuesday.

Erdoğan also insisted repeatedly that there could be no solution to Syria's conflict while the Assad regime remains in power.

"Assad is not the address for a prospective solution in Syria," Erdoğan said at the presidential complex in the Turkish capital. "Syria should be liberated from Assad so that a solution could emerge."

Erdoğan also hinted at a softening of Russia's support for Assad. Russian President Vladimir Putin, he said, had told him: "'Erdoğan, don't get me wrong. I'm not an advocate for Assad, I'm not his lawyer'. That's what he said. Putin told me this."

There are developments in Syria Putin "cannot share with us", the president said, "but right now Putin, (U.S. President Donald) Trump, us, Iran, Saudi Arabia, Qatar, we have all assumed an active role in the effort to create a solution in Syria. We can get together and we can help the people of Syria to make up their own minds".

The president said that Syrians would find a way forward if freed from Assad's rule.

"Daesh is not going to replace Assad," he said. "Daesh is not a representative of Islam, they are a blasphemy, they have no connection with Islam and this is something we all have to agree."

He said he had discussed this with Trump and Putin, having failed to make any headway with former U.S. President Barack Obama.

Now, he said, with "the new administration we are going to talk about these aspects and we are going to invite them to take the next step forward with us so that the fate of Syria can be identified by the people of Syria".

"Why? Assad is the sole reason. We can no longer speak about a solution with Assad, or our efforts will be in vain, so we have to let the people of Syria choose their own leader".

Erdoğan said he was confident that there are plenty of alternatives to Assad. "I have no hesitations, I have no reservations. There are many ideal names who can be the next leader."