US, PYD/YPG coalition in violation of NATO treaty 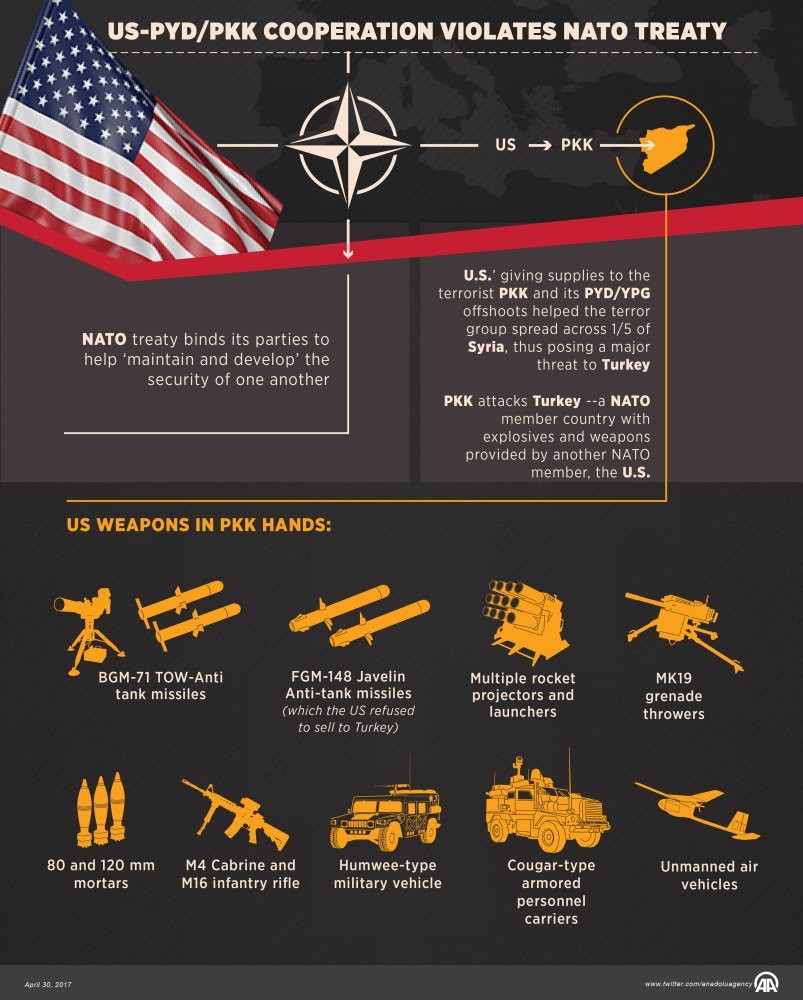 While the U.S. has increased its military support for the PKK terrorist organization's Syrian affiliates and allowed the group to occupy a large area, Washington's obligations to NATO under Article 3 and Article 5, which says if one NATO ally is attacked, it will be considered an attack against all NATO member states, are under question

The U.S. is violating its obligations under two articles of the NATO treaty in their support of the PKK's Syrian offshoot the Democratic Union Party (PYD) and its armed wing, the People's Protection Units (YPG) in the fight against Daesh in war-torn Syria.

According to Article 3 of the NATO treaty, "In order to more effectively achieve the objectives of this treaty, the parties, separately and jointly, by means of continuous and effective self-help and mutual aid, will maintain and develop their individual and collective capacity to resist an armed attack."

Asserting the principle of collective defense mechanisms, Article 5 says, "The parties agree that an armed attack against one or more of them... Shall be considered an attack against all of them and, consequently, they agree that if such an armed attack occurs, then each of them, exercising the right of individual or collective self-defense recognized by Article 51 of the U.N. Charter, will assist the party or parties so attacked by taking forthwith, individually and in concert with other parties, such action as it deems necessary, including the use of armed force..." 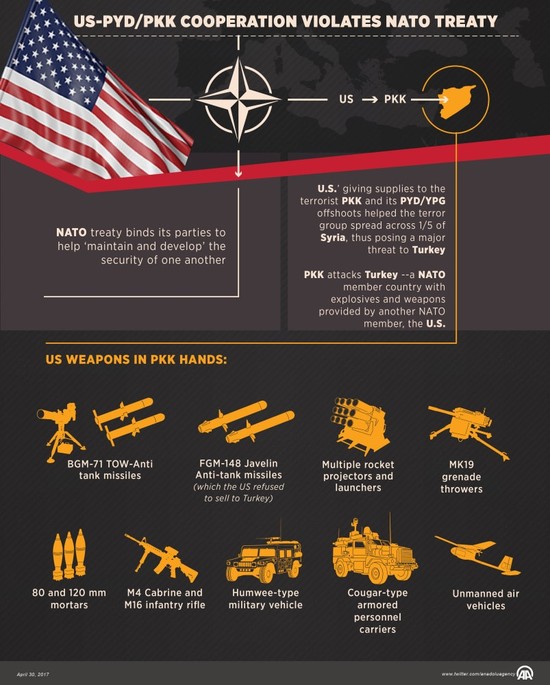 However, the U.S. giving supplies to the PKK terrorist organization and its PYD/YPG offshoots helped the terror group spread across one-fifth of Syria, thus posing a major threat to Turkey.

Especially over the last two years, the U.S., which has increased its military support for the PKK's Syrian affiliates, allowed the group to occupy a large area under the guise of fighting Daesh.

The U.S.'s failure to meet its obligations under Article 3 and Article 5 calls into question the loyalty of the U.S. to the central purpose of NATO; namely, the fact that an armed attack against one NATO ally will be considered an attack against all NATO member states.

The PKK is listed as a terrorist organization by Turkey, the U.S. and the EU, while Turkey also considers the PKK's Syrian offshoot, the PYD, a terror group. However, the U.S. has called the PYD a key ally in the fight against Daesh in Syria despite Turkey's repeated calls for the U.S. to end its support for the PYD/YPG.

SDF the proverbial fig leaf for PYD/YPG in Syria

According to security officials in Turkey and Syria, the formation of the Syrian Democratic Forces (SDF) more than a year ago has also provided the U.S. with an opportunity to deepen its relationship with the PYD/YPG.

Many view the umbrella group as a fig leaf to disguise U.S. support for the PYD/YPG. The Pentagon said last week that U.S. forces are operating "in close proximity with" SDF fighters in northern Syria, including near the Turkish border.

Images from Syria shared on social media often show militants wearing SDF and PKK/PYD insignia fighting alongside each other.

According to Turkish security officials who asked not to be named due to restrictions on speaking to the media, the explosives and weapons the U.S. provides to the PYD/YPG in Syria are used by the PKK in terrorist attacks in Turkey.

Namely, an April 11 bomb attack on a police compound in the southeastern Turkish province of Diyarbakır was carried out using explosives the U.S. supplied to the PYD/YPG in Syria, according to the security official.

Three people were killed in the attack, for which the PKK claimed responsibility. The local governor said at the time that a ton of explosives were placed in a tunnel under the compound.

The official also claimed that weapons the U.S. supplied to the PYD/YPG had also been found in PKK camps.

The U.S.-provided weapons, which the source said included ammunition, anti-tank rockets and assault rifles as well as explosives, crossed into Turkey from Sinjar in Northern Iraq and from the Karacok region in Syria.

In addition to citing the Diyarbakır attack, the security official also said U.S.-provided weapons had been used in other attacks on security forces across Turkey.

In April 2016, the U.S. ambassador to Ankara denied that the U.S. was arming the PYD/YPG, saying any U.S. weapons found in PKK hands would have ultimately come from Iraqi security forces.

Since the PKK launched its terror campaign in 1984, an estimated 40,000 people in Turkey have died in related violence.

The PKK resumed its armed campaign against the Turkish state in July 2015. Since then, the terrorist organization has been responsible for the deaths of approximately 1,200 security personnel and civilians, according to official numbers.
RELATED TOPICS