Every development in Syria and Iraq a matter of national security for Turkey, Erdoğan says 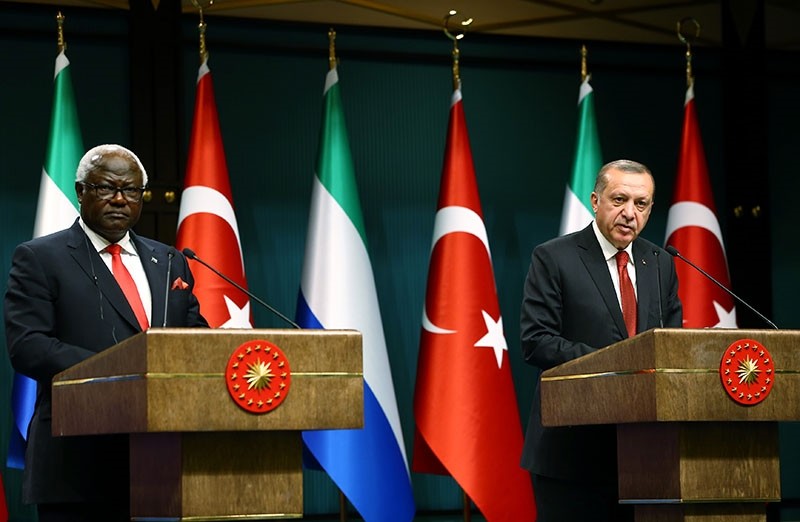 President Recep Tayyip Erdou011fan speaks in a joint press conference with President Ernest Bai Koroma of Sierra Leone in Beu015ftepe Presidentital Complex in Ankara, May 10, 2017. (AA Photo)
by Daily Sabah with AA May 10, 2017 12:00 am

President Recep Tayyip Erdoğan has said that everything that happens in Syria and Iraq is "a matter of national security for Turkey".

The President's remarks came during a press conference with his Sierra Leonean counterpart Ernest Bai Koroma in Ankara's Presidential Complex.

"A terrorist group [Daesh] cannot be defeated with another one," he said, once again reiterating Turkey's stance on the controversial decision in the fight against Daesh.

The president said he would express his concerns in this regard at his meeting with U.S. President Donald Trump on May 16, adding the same issue would also be brought up at the NATO summit to be held in Brussels on May 25.

"I believe that these meetings will ensure the stability of the region and will lead us to reach a conclusion compatible with the realities of Syria."

Erdoğan also said he hoped the U.S. government would "reverse" its decision to arm the PKK/PYD in Syria before his visit to the U.S. next week.

On Tuesday, the Pentagon announced that U.S. President Donald Trump had approved the arming of the Syrian Democratic Forces (SDF) ahead of an attempt to drive Daesh from Raqqa, the last Syrian city held by the terror group.

The SDF is spearheaded by the PKK/PYD and its armed wing, the PKK/YPG. Turkey views both as the Syrian affiliates of the terrorist PKK, which has fought a 33-year war against Turkey and is also listed as a terror organization by the U.S. and EU.

However, the U.S. has used the PKK/PYD as its ally in Syria in combatting Daesh. Turkey has repeatedly called on the U.S. to end its ties to the PKK/PYD and offered to help take Raqqa.

Erdoğan also thanked Koroma for his country's decision to lift diplomatic visa requirements. In return the Sierra Leonean President also expressed his gratitude to Turkey, thanking the country for its support both at the UN and other international forums during the widespread outbreak of Ebola virus, which claimed thousands of lives in the West Africa.

More than 11,300 people died from the Ebola epidemic that swept West Africa in 2014 during the worst-ever outbreak of the disease, according to the World Health Organization.