No US objections about Turkey striking YPG: Foreign Minister 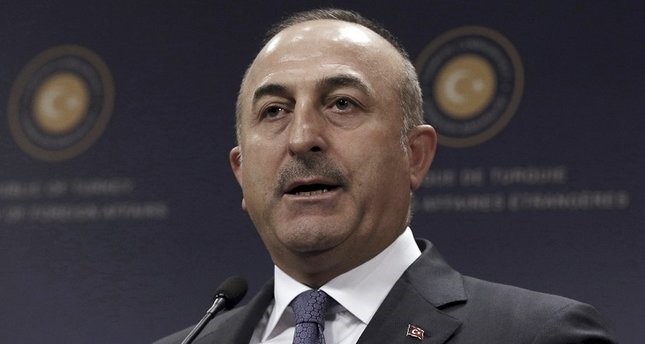 In the wake of the face-to-face meeting between Erdoğan and Trump last Tuesday, during which a consensus coult not be reached on the YPG terror, Foreign Minister Mevlüt Çavuşoğlu emphasized Thursday that Ankara may strike the YPG in Syria, about which the U.S. did not express any reservations

Foreign Minister Mevlüt Çavuşoğlu said Thursday that the United States did not oppose the statement given by Turkish officials in Washington earlier this week detailing the Turkish military's plan to target the PKK's Syrian offshoot, the Democratic Union Party (PYD) and its armed wing, the People's Protection Units (YPG). Speaking live on NTV Thursday, Foreign Minister Çavuşoğlu said the U.S. did not express reservations when Turkish officials stated that Turkey may strike the YPG in Syria in line with the rules of engagement.

The foreign minister also noted that the U.S. assured the Turkish officials that the weapons handed to the YPG will only be used during the Raqqa operation and not against Turkey. In the meantime, the YPG has been given heavy weapons to allegedly fight the Daesh terror group. Ankara has concerns that the heavy weapons provided to the YPG will be directed at Turkey. Turkish security forces have seized anti-tank weapons and surface-to-air missiles supplied by the U.S. "We told them that the YPG is participating in the Raqqa operation not to liberate the city from Daesh but with the goal of declaring an independent state in the future," Çavuşoğlu said, and added that the U.S. responded by saying that they will not allow an attempt to destroy Syria's territorial integrity.

Çavuşoğlu also said that it would be beneficial if the U.S. replaced Brett McGurk , who was assigned by former President Barak Obama as the Special Presidential Envoy for the Global Coalition to Counter ISIS, a group also known as Daesh, as he openly supports the PKK and the YPG.

Brett McGurk paid a visit to PYD-controlled Kobani and held talks in February 2016. Photos of McGurk's visit to Kobani surfaced on social media. He was also seen meeting with former PKK fighters in Syria. Polat Can, known as the spokesman and one of the founders of the YPG, shared a photo on his Twitter account of him presenting a plaque to McGurk.

The foreign minister noted that the U.S. officials in Syria, who were assigned during the Obama administration, could pose threats to the relations between the two countries.

He noted that Turkey told the Trump administration that such officials from the Obama administration could damage bilateral ties, without mentioning any names.

"The new U.S. administration is more sincere than the previous one," Çavuşoğlu said, adding that President Recep Tayyip Erdoğan conveyed Turkey's stance in a clear and determined manner.

"We reached some agreements in principle regarding issues in which the two countries diverge," Çavuşoğlu said. Despite the previous U.S. administration's insistence on recognizing no direct links between the PKK and the YPG/PYD in Syria, former U.S. Secretary of Defense Ashton Carter confirmed the link between the terror groups while testifying before a Senate panel at U.S. Congress in April 2016.

Even though the U.S. administration has not stopped aiding the YPG, Ankara is intent on eradicating the threat in Syria and Iraq.