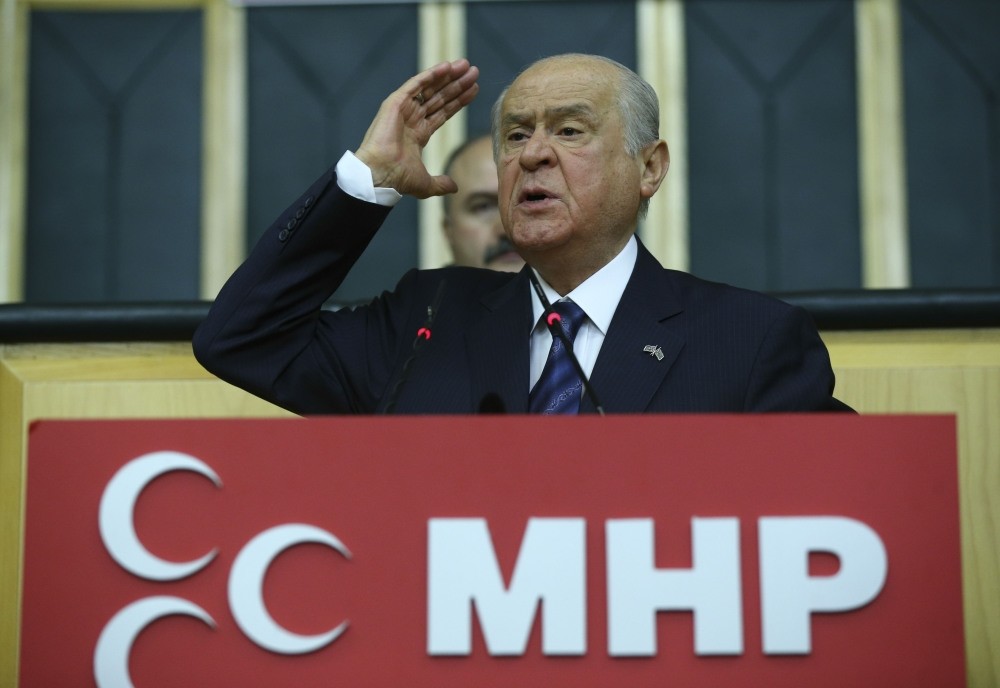 MHP's Bahu00e7eli drew attention also to the necessity of maintaining the fight against the Gu00fclenist Terror Group (FETu00d6) in the party's weekly parliamentary group meeting yesterday.
by Daily Sabah May 24, 2017 12:00 am

Opposition MHP's Chairman Bahçeli criticized the U.S. over its arms support to the YPG, stating that terror groups have no place in the future of Syria

Turkey's opposition Nationalist Movement Party (MHP) chairman Devlet Bahçeli, speaking at the party's weekly parliamentary group meeting yesterday, strongly criticized the U.S. over several matters including a recent decision to supply heavy weaponry to the PKK's Syrian affiliate Democratic Union Party's armed wing, the People's Protection Units (YPG.) Bahçeli also touched on the incident near the Turkish ambassador's residence last week and harshly refuted U.S. Secretary of State Rex Tillerson's recent statement saying, "'Turkish violence' is unacceptable. Tillerson's remarks on 'Turkish violence' are nothing short of a rotten claim, which is completely devoid of compassion. It is neither within the boundaries nor in the scope of the duties of the U.S. secretary of state to mention the word 'violence' together with Turkey," Bahçeli said.

Commenting on the matter, MHP leader Bahçeli yesterday stressed: "It is an extremely cowardly and shameful attempt at self-defense to cover up the provocations and violent agitations of Turkey's enemies in front of the Washington embassy and blame Turkey. The PKK blood in the U.S. has re-emerged and gone wild with the Turkish delegation's official visit. The PKK has received its supplies from the White House and revealed its war weapons."Affirming that the diplomatic note issued by the Foreign Ministry to the U.S., due to the "aggressive and unprofessional" actions of U.S. security personnel against Çavuşoğlu's protection team, was correct and well-decided, the MHP leader criticized the U.S. for supplying arms to the PKK-affiliated YPG. "Terror groups have no place in the future of our region. It is absolutely against the international agreement for any country to cooperate with terror groups; especially the YPG/PYD," he reaffirmed, continuing by thanking the president for his comments on YPG during his official visit to the U.S.

Meanwhile, Turkey's ambassador to Washington on Monday condemned last week's demonstration outside of his residence, calling it an "expression of solidarity with terrorism."

Speaking at the annual conference on U.S.-Turkey relations, Serdar Kılıç told attendees it was "really disappointing to see the so-called flag of the PKK, which is a U.S.-designated terrorist organization, on the streets of Washington, D.C.

"We do not take it as freedom of expression," he said. "It's an expression of solidarity with terrorism."

In response, Turkey's Foreign Ministry summoned the U.S. ambassador to Turkey on Monday in protest against the "aggressive and unprofessional actions" of American security personnel toward the foreign minister's protection team.

Foreign Minister Mevlüt Çavuşoğlu was traveling with Erdoğan at the time.

After the incident, the Turkish embassy released a statement saying, "Groups affiliated with the PKK, which the U.S. and Turkey have designated as a terrorist organization, gathered yesterday without permit in Sheridan Circle in the immediate vicinity of the Ambassador's Residence, while the president of Turkey was visiting the Residence. The demonstrators began aggressively provoking Turkish-American citizens who had peacefully assembled to greet the president. The Turkish-Americans responded in self-defense and one of them was seriously injured. The violence and injuries were the result of this unpermitted, provocative demonstration. We hope that, in the future, appropriate measures will be taken to ensure that similar provocative actions causing harm and violence do not occur."

Responding to the incident, U.S. State Department Under Secretary for Political Affairs Thomas Shannon thanked Kılıç for attempting to calm the situation at Sheridan Circle, but called the events that occurred "deplorable.""During that incident, Americans saw lawful protesters attacked at Sheridan Circle," he said. "It is important to note that in the United States such protests are legal, protected and customary."

According to police, out of the 11 people that were injured last Tuesday, including a police officer, nine of them were hospitalized.Kılıç disputed Washington's approach to combating Daesh in Syria, saying he "can hardly understand and accept the argument that the U.S had to conduct the operation on Raqqa by making use of the Democratic Union Party (PYD) and its armed wing, the People's Protection Units (YPG) since there is no alternative on the ground.

Shannon stressed that the U.S. position on the PKK was unchanged and that Washington stands resolute with Turkey against the designated terror group.

"To the PKK we want to be perfectly clear: Violence against innocent civilians is never justified, and the United States has been and always will be unequivocal in our strong condemnation of the PKK," he said.

'Fight against FETÖ must continue without hesitation'

Meanwhile, Bahçeli drew attention to the necessity of maintaining the fight against the Gülenist Terror Group (FETÖ) and said, "It is the honor and historic duty of the Turkish government to find each FETÖ member and collar them. Showing mercy to traitors is a betrayal to the oppressed." Bahçeli further noted that counterterror efforts against FETÖ must continue rigidly and without any hesitation.