New struggle for influence over PKK terrorists emerges between US, Iran 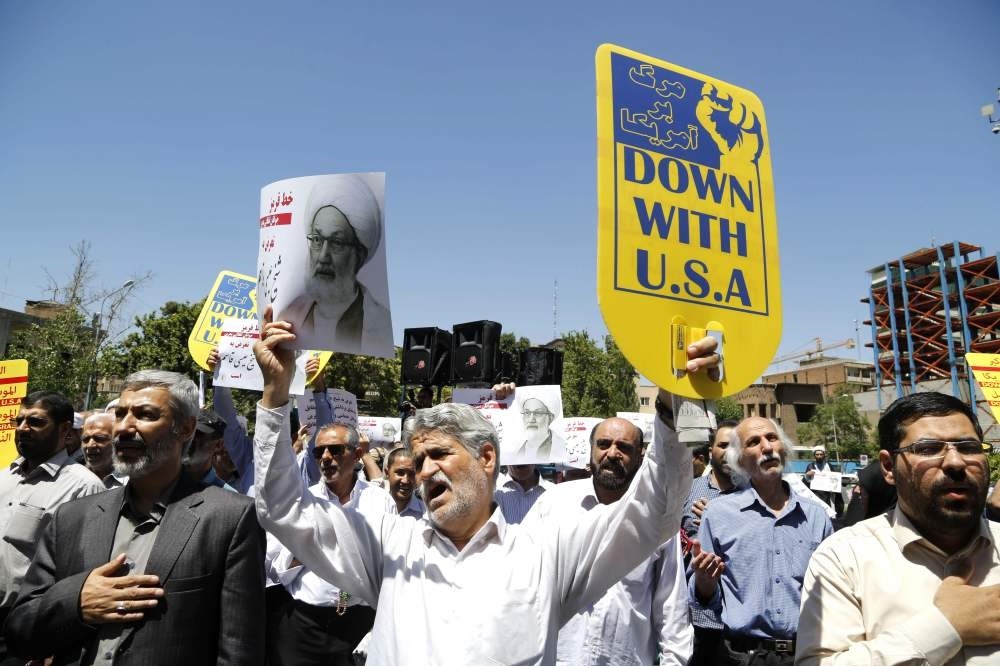 Iranian protestors hold banners in the capital Tehran during a demonstration on May 26.
by Yunus Paksoy
May 31, 2017 12:00 am

Following the reconciliation period during the Obama administration, relations between the U.S. and Iran plumbed the depths after Trump's election. Yet, the dispute has revealed itself in another field, as a power struggle to gain influence over the PKK has broken out, experts claims

After the PKK's Iranian offshoot, the Party of Free Life of Kurdistan (PJAK), renewed its armed campaign against Iran over the weekend (which was interpreted as a U.S.-backed move), the Iranian Quds Force Commander Major Gen. Qasem Soleimani's presence in PKK-held Sinjar together with the extremist Shiite militia Hashd al-Shaabi led to speculation about a new struggle for influence in the region between Washington and Tehran.

According to a recent photo circulating on social media, Soleimani was seen with Hashd al-Shaabi militants in the Sinjar region, near the Iraqi-Syrian border. His presence in the area with Shiite militants added fuel to the discussions that a struggle for influence has begun between the U.S. and Iran.

Bilgay Duman, an expert at the Middle East Strategies Research Center (ORSAM), agreed with the idea that there is a struggle for influence between the two countries. "We can see it in Syria and Iraq. The U.S. is strictly against Iranian structures in both countries," Duman said, adding: "Trump has not been able to draw an obvious line in his foreign policy, but one thing he did openly, was stand up to Iran."

The PJAK's attack on Saturday near the Turkish-Iranian border that killed two Iranian guards and wounded seven others was interpreted as a result of the U.S.'s new policy in the region against Iran. Çetiner Çetin, an Ankara-based journalist focusing on the developments in the region, claimed that the PJAK attack came after the U.S. forced the PKK to make a choice between Washington and Tehran.

Mehmet Koç, an expert on Iran and the region, said that the tide during the Obama administration has now turned following Trump's taking office. "An alliance between Trump and the Gulf countries will pile pressure on Iran's network and goals in the region," he said. "The PJAK ceased its activities and Iran turned a blind eye to the PKK's activities, siding with its Syrian offshoot the YPG [People's Protection Units], as if taking revenge on Turkey."

Ahmet Uysal, the head of the Ankara-based think-tank, the Center for Iranian Studies, also pointed to Washington's new Iran policy. Uysal said that the attack may be related to the U.S.'s rapprochement with the Gulf countries against Iran.

Soleimani's presence in the PKK-held Sinjar area following the PJAK attack that took place a couple days ago cemented the idea that Iran does not want to lose its control over the PKK. Duman said that Trump's new policy, and his close relations with Russia may alienate Iran in the region. "Therefore Iran is under serious threat," he contended.

Koç contended that such a tension between the U.S. and Iran has been speculated on for a while. "It is now getting closer," he added. Stressing that Obama's choice to work with Iran against terrorist groups allowed space for Tehran to move in the region, Koç said that the situation on the ground will be different in the new era.

Furthermore, a NATO-style alliance for the Middle East was discussed last week during a NATO summit, attended by U.S. President Donald Trump. The move was followed by President Trump's latest efforts to isolate Iran in the region while bolstering cooperation with Saudi Arabia and other Gulf countries.

The aim of the new plan is to draw a new map of regional alliances through establishing joint forces and intelligence sharing between Washington and regional states to defeat Daesh and most importantly, face Iranian threats.

The PJAK, which is associated with the Kurdish Communities Union (KCK), the umbrella organization for the armed terrorist organizations the PKK and PYD, ended all armed operations unilaterally and had declared a cease-fire in 2011. PKK leader Abdullah Öcalan stated in an interview with the Iraqi television network Zelal in 2013 that "I founded the PYD as I did the PJAK."

Duman commented on the PKK's attempts to justify its actions in the region by splitting up. "There was not enough space for the PKK to move as one body. I think they are adopting a new strategy. It forges different alliances to preserve its interests. It works with the U.S. in Syria via the YPG, and it has cooperation with Iran in Iraq via the YBŞ."