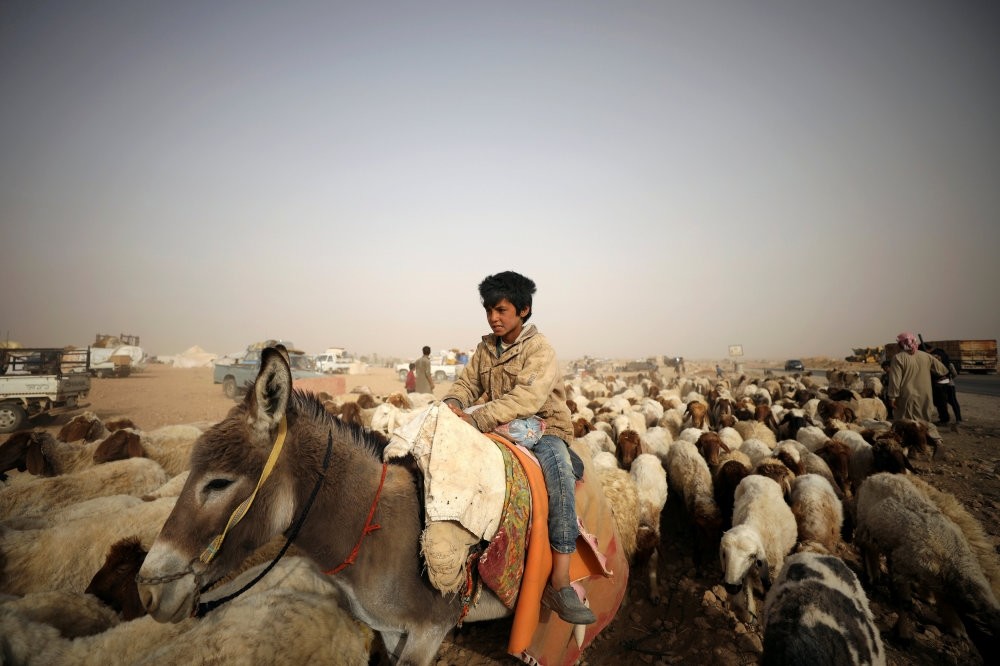 An internally displaced boy who fled Raqqa herds sheep while riding a donkey in a camp near Ain Issa, Raqqa Governorate, May 19.
by Daily Sabah Jun 03, 2017 12:00 am

Syrian Turkmen and Arab tribes in northern Syria said that the U.S.'s intention to hand over Raqqa city from ‘one terrorist group to another' means ignoring their will and have called the military operation toward the city collusion

The Deputy Head of Syrian Turkmen and Arab Tribes Union Ömer Dede has called the apparent handing over of Raqqa to the PKK-linked Democratic Union Forces (PYD) by Daesh as "collusion," adding that they will not accept such fait accompli in the region.

Dede talking to Anadolu Agency said no Syrian will accept the PYD terror group's domination in the city after the post-Daesh period.

"We know that Daesh withdrawal and leaving the city to the PYD forces is a sham. The U.S. intentions of handing the city over to another terror group after taking it from Daesh denotes ignoring the will of Syrian people. We condemn the U.S. for this manner," he said.

Daesh's withdrawal from many positions around its main stronghold Raqqa without showing any resistance against the PYD raised some eyebrows, especially after cases of negotiations between the two terror groups were revealed.

Russian foreign minister Sergey Lavrov said Wednesday that a Ministry of Defense statement which acknowledged that the PYD's armed wing, the People's Protection Units (YPG) and Daesh have reached a deal over the evacuation of Raqqa was based on credible evidence.

"According to the information I have, the Democratic Syrian Forces [comprising of mostly YPG terrorists] refuted having reached an agreement with Daesh to form a corridor between Raqqa and Palmyra to allow Daesh militants to leave the city. But our Defense Ministry confirmed this information, which is based on credible evidence and data. In addition, right after that news broke, Daesh terrorists started moving towards Palmyra from Raqqa," he said.

It was not the first such deal between the two terror groups however. Earlier in May, the YPG had cut a deal with Daesh for the evacuation of Tabqa, an important province by a dam near the terror group stronghold of Raqqa, and let a group of about 70 terrorists leave the city. The Pentagon meanwhile said it played no part in the unusual deal.

Dede also called on Turkey and other countries in the region to hinder the PYD's efforts to change demographics in the region."We inherited these lands from our ancestors and cannot abandon them to a terror group. There is no difference between Daesh and the PYD. It can easily be understood with the latest developments in the region," he said.

The U.S.-backed the PYD's actions in northern Syria including forced migration and arresting dissident voices drew severe criticism from inhabitants and different organizations.

Earlier this week, northern Syria's Arab tribe leaders, whose lands were invaded by the PYD, said that they will launch military resistance against the terror group to take back their occupied lands and to end the oppression against the Arab population in northern Syria.

Sheikh Rafi er-Raco Ukla, the deputy head of the Syrian Tribes and Clans Supreme Council, the organization that represents 50 Arab tribe leaders coming from Syria's Raqqa and the al-Hasakah and Deir ez-Zor, said that the PKK and its extensions have been trying to destroy Arabic identity on Syrian soil. He added that their organization will launch military resistance to put an end to the invasion.

The PYD terrorist organization's forced migration of Arabs and Turkmens, as well as arbitrary arrests targeting critical voices and the recruitment of child soldiers, have been covered by international human rights groups, including Human Rights Watch (HRW), Amnesty International and Kurdish Watch.

The terror group's acts of oppression are not confined to Arab and Turkmen populations but also target rival political voices with retaliation being taken in the form of arson, arrests and kidnappings and has been voiced as concern by Kurds in northern Syria. The Kurdish National Council (KNC) in Syria has been a critical voice against arrests and abductions carried out by the PYD.