Turkey to respond to any threat from Raqqa operation, PM Yıldırım says 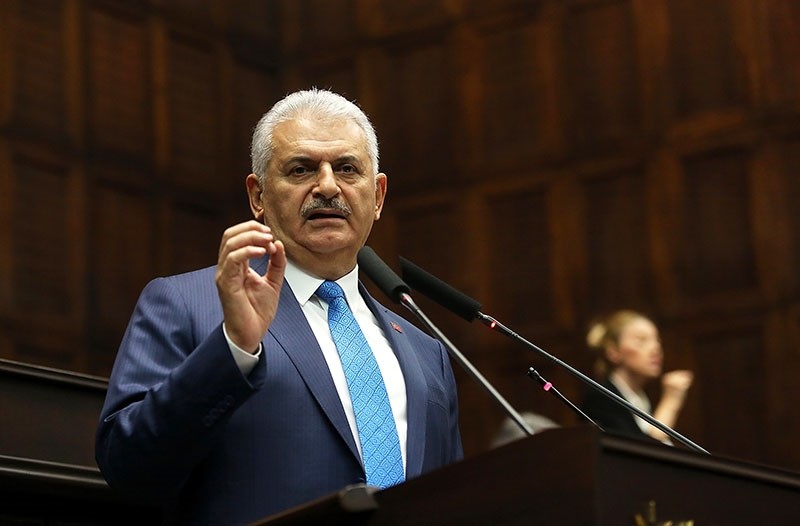 Ankara has restated its firm position against any possible threats coming from the U.S.-backed Syrian Democratic Forces (SDF) in Syria, a group which is predominantly led by the PKK terror organization's Syria affiliate, the YPG, during the ongoing operation to capture Raqqa from Daesh.

Prime Minister Binali Yıldırım underlined yesterday during his weekly party group meeting in Parliament that Turkey would respond to any threat presented during the ongoing operation. The SDF forces are dominated by the People's Protection Units (YPG), which is the armed wing of the PKK's Syrian offshoot, the Democratic Union Party (PYD). The PKK is listed as a terror organization by the U.S., the European Union, and Turkey.

"We are taking every precaution with regards to the Raqqa operation. We will not allow any situation that will pose a threat to our country. We will not allow any situation that creates a threat to our country. If we encounter a threatening situation in Raqqa or the region, we will give the appropriate reply immediately," Yıldırım said, also criticizing the U.S. that, "Despite our repeated warnings, our ally the United States chose to partner with a terror group against another terror group, thinking that it will defeat it."

Emphasizing that Turkey's efforts in northern Syria's Jarablous, al-Rai, and al-Bab were necessary for the region's peace and stability, Yıldırım stated that Turkey would closely monitor any situation that could develop after the operation, taking all necessary precautions.

The long-expected operation to capture Daesh's de-facto capital in Syria began on June 2 with an assault by the U.S.-backed SDF. In a reference to the YPG, Yıldırım added, "I want to say again that support for terror groups is not compatible with being our allies. We must struggle with a common language against terror groups in the region, without any discrimination."

"Partnering with a terror group to defeat another one of the same kind does not align with any logic or legality," Bahçeli said.

The MHP leader also said that the U.S. arms support to YPG ultimately benefits the PKK terrorists in Turkey, which uses the arms against the Turkish people. He added that recent Turkish military operations against the PKK in the Kato Mountains have seized weaponry that showed that the arms are being transferred from the YPG to the PKK. The mountain used to be a safe haven for the PKK, but the group was dealt a heavy blow there since operations began around two months ago.

As part of its fight against Daesh strategy, the U.S. military has continued to support the YPG militia. With its latest deliveries, 218 truckloads of equipment will have been delivered to the YPG north of Raqqa within the last three weeks.

"Those expecting to see us stay silent on a terror state being founded before our eyes will be sorry," President Recep Tayyip Erdoğan said last week in Ankara, adding, "Such an attitude will mean they have not understood Turkey's character and stance."