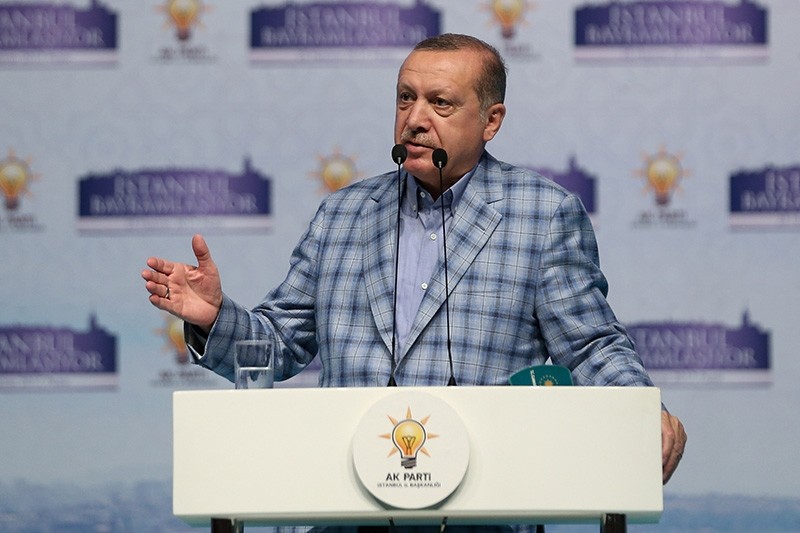 Speaking at the Eid al-Fitr celebration meeting of the ruling Justice and Development Party (AK Party) in Ankara, Erdoğan said: "At one side we will be together in NATO but on the other side you will act together with terror organizations. Then NATO needs to be reassessed. All of these moves are against NATO."

"I pointed these out at the last meeting in Brussels. We will respond to every terror attack from Syria or Iraq to Turkey in their own land," Erdoğan said.

The president also questioned the sincerity of assurances from the U.S. that the support will be ended once Daesh is defeated in Iraq and Syria. "Through the Operation Euphrates Shield, we had disrupted the initiative of establishing a terror corridor alongside our borders with Syria. Unfortunately, countries that we call allies, we had known as friends, do not see any problems in cooperating with terror groups that set their eyes on Turkey's territorial integrity. Those who think that they deceive Turkey by saying that they will take back the weapons given to this terror group will be taken back will understand that they made a vital mistake eventually but the damage will be done for them," Erdoğan said, referring to the assurances of U.S. Secretary of Defense James Mattis in a letter to his Turkish counterpart Fikri Işık.

"We will bring the invoice of every drop of blood shed through those weapons before the actual owners of these weapons. We will not allow a terror state established in northern Syria, on our border," the president said, noting that the Turkish military will continue to do what is necessary just like it had done with the Free Syrian Army (FSA) in a 2,000 square kilometers of land in Syria covering the towns of Jarablous, al- Rai, Dabiq and al-Bab.