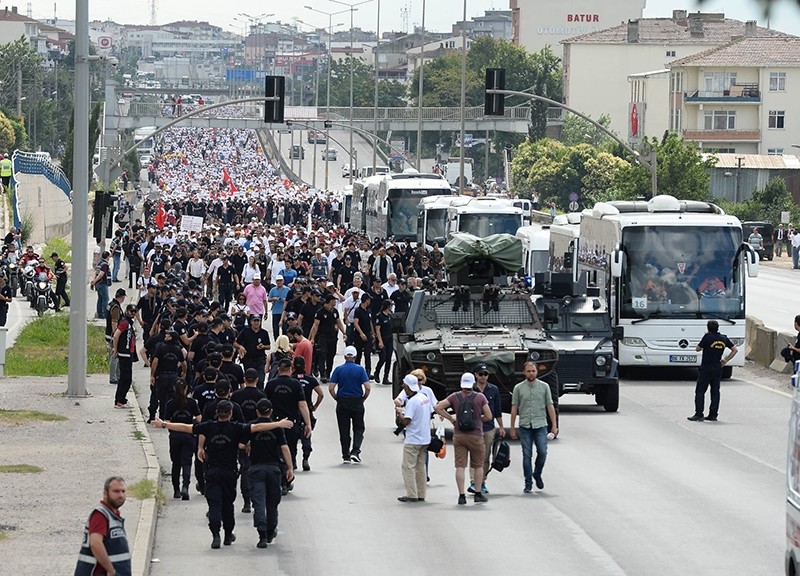 In a major blow to the Daesh terrorist group, Turkish police arrested 37 suspects Wednesday and over the past few days in operations across the country. The suspects include six people who were planning to carry out a suicide bombing targeting a march by the main opposition Republican People's Party (CHP).

Six Daesh terrorists planning to carry out an attack on a 400-kilometer march from the capital Ankara to Istanbul launched by main opposition Republican People's Party (CHP) have been detained by police Kayseri Governor Süleyman Kamçı said Wednesday.

The governor told the media that the terrorists were detained after receiving intelligence about a provocative attack targeting the CHP march, which is on its 21st day.

He noted that the terrorists were planning to drive into the crowd with a rented minibus bearing flags of the ruling Justice and Development (AK Party) Party. "A huge provocation has been prevented" Governor Kamçı said.

The D-100 highway where Kılıçdaroğlu was walking in the company of hundreds of people toward Istanbul was closed to traffic by security forces earlier Wednesday upon intelligence over likely attacks.

Media outlets reported that the suspects were planning to plow the van into the crowd, in an attack in the fashion of a recent string of terror attacks in Europe blamed on Daesh. Security experts have been warning recently that the CHP's march may be "sabotaged" to trigger chaos, pitting supporters of political parties against each other. Security sources speaking to Doğan News Agency said the van driver nicknamed "Abu Hussain" was a militant under surveillance and although no weapons were found in the van, his text messages with other suspects showed he planned to drive the vehicle into the crowd. Two other suspects linked to the plot remain at large.

In response to security precautions, CHP Spokesperson Bülent Tezcan said that the party is not disturbed by the procedures.

"We demanded them," Tezcan said, adding that the party wants to safely finish the march, as he thanked security personnel for their efforts.

Kılıçdaroğlu's march started on June 15 after Istanbul's 14th Heavy Penal Court ruled to sentence CHP lawmaker Enis Berberoğlu to 25 years in jail for releasing classified documents with the purpose of political or military espionage. Berberoğlu was arrested in the courthouse after a hearing. He was accused of supplying confidential information regarding the country's intelligence service to two journalists, Can Dündar and Erdem Gül, in the controversial "MİT trucks" case.

Also on Wednesday, police carried out operations against Daesh suspects in other provinces. The first operations were the result of an investigation by police in Van, a province bordering Iran. Van police said in a statement that simultaneous operations were conducted in the western cities of Istanbul, İzmir, Kocaeli, Denizli and the eastern cities of Ağrı, Bingöl, Adıyaman and Mardin to capture Daesh suspects planning attacks. Separately, 12 Daesh suspects - arrested in two recent operations in the southern Adana province - were referred to the court yesterday. Security sources quoted by Anadolu Agency (AA) said the suspects include Adana "emir" for the terrorist group as well as a 14-year-old Indonesian girl suspected of being persuaded to join the group by a militant currently at large. Two of the suspects were planning to conduct attacks abroad while some others were plotting to attack meetings of some religious communities in central Konya and southern Gaziantep provinces, security sources said.

Nearly 190 suspects linked to Daesh were arrested in nationwide counter terrorism operations across Turkey last month, according to information from security officials. An AA analysis of security announcements showed that 20 out of 188 Daesh suspects - including foreigners - were remanded into custody to face trial on a variety of charges.

Security forces also detained a Syrian national caught trying to cross illegally into Turkey through the Syrian border and discovered more than 5 kilograms (11 pounds) of TNT explosives and nine detonators in his possession. The man's identity was not disclosed while an investigation is underway as to whether he is linked to Daesh. The man was captured in Hatay, a province bordering with northern Syria, which has been a crossing point for Daesh militants seeking to infiltrate into Turkey. Affiliates of the PKK, a terrorist group which has been engaged in a campaign of violence in southeastern Turkey since the 1980s, are also active in northern Syria.

Daesh is blamed for a string of attacks in Turkey, ranging from suicide bombings to gun attacks. In January, a lone Daesh gunman stormed a popular nightclub in Istanbul where he killed 39 people during New Year's Eve celebrations. The gunman was caught a few weeks later. Turkey is one of the many main enemies of Daesh, which emerged in Iraq and Syria, Turkey's two neighbors. Turkey is also tackling an influx of foreign fighters looking to sneak into Syria and Iraq where Daesh controls towns and a large swathe of territories. Since Daesh's emergence, Turkey has detained over 5,000 Daesh suspects, deported over 3,290 foreign terrorist fighters from 95 countries and has refused entry to more than 38,269 individuals in anti-terror drives. Turkey also launched Operation Euphrates Shield last year and backed Syrian opposition groups fighting Daesh in Syria. The operation, which took place from August 2016 to April 2017, saw the liberation of the Syrian towns of Jarablus, al-Rai, Dabiq and al-Bab from Daesh control.