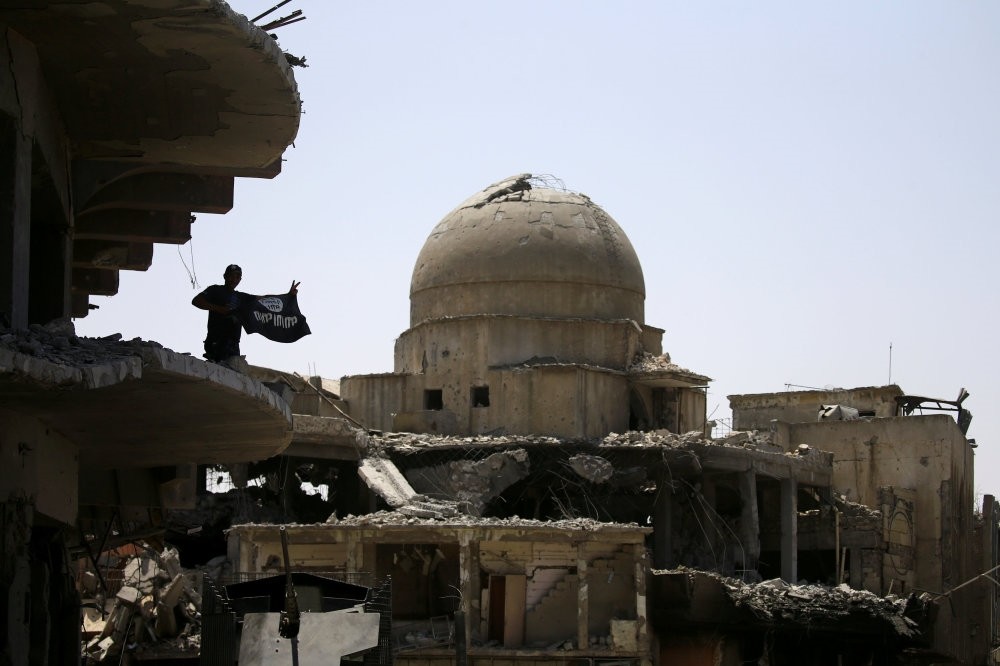 A member of Iraqi security forces holds a Daesh flag on the top of a building destroyed in clashes in the old city of Mosul, Iraq July 10.
by Daily Sabah with AA Jul 11, 2017 12:00 am

Pleased to hear about the liberation of Mosul from Daesh, Erdoğan said that it is crucial for Iraqi society to integrate its outcasts into the political and economic systems of the country to create a peaceful environment

President Recep Tayyip Erdoğan expressed yesterday that he was pleased to hear the news that the defeat of Daesh in Mosul was very close.

"I am very glad to hear that the end of Daesh in Mosul/Iraq is very near now. However, Mosul's condition now is also very important. Mosul is a ruined place right now. I wonder who will pay the price for that," President Erdoğan said while delivering an address in Istanbul to the 22nd World Petroleum Congress.

"The integration of the outsiders of Iraqi society into the political and economic system is an inevitable condition for peace to be achieved," Erdoğan said, expressing that the importance of keeping the territorial integrity of Iraq is increasing.

Nearly 760,000 people have fled Mosul during the seven-month government offensive and in May, U.N. officials said that they did not know for sure how many civilians were still living in Daesh-controlled areas.

U.N. agencies have set up camps near Mosul to house those displaced by the fighting, and last summer it was estimated that up to 1 million people could be forced from their homes.

"Staying away from the one way initiatives such as the independence referendum, the abatement of the influence of the national forces and putting an end to the existence of the PKK will be the determinant factors in this country's future," the president further said.

He also said it was crucial for the international community to state their opinion to Iraq "loudly."

"Every step that makes more problems for Iraq, a country which already has a lot of issues to deal with, does not lead to anything but fueling the instability," he added.

The Foreign Ministry also "welcomed" the liberation of the northern Iraqi city of Mosul over the weekend. On Sunday, Iraqi Prime Minister Haider al-Abadi arrived in Mosul to mark and celebrate the victory over the Daesh terrorist group.

"We welcome the successful completion of the military operation conducted since October 2016 for the liberation of Mosul," the Foreign Ministry said in a written statement.

The press release added that Turkey was ready to contribute to the reconstruction efforts of the city and to the elimination of the conditions that led to the emergence of Daesh.

"We share the sufferings of the people of Mosul, composed of different religious, sectarian and ethnic groups who are among the greatest victims in Iraq of the atrocities of Daesh, which has also targeted our country with its brutal terrorist acts," the statement added.

Yesterday, Iraqi forces attacked the last Daesh pockets in the Old City of Mosul, according to a local police officer. On Sunday, Iraqi forces battling Daesh militants reached the Tigris riverbanks in Mosul.

Mosul was captured by Daesh along with vast swathes of territory in northern and western Iraq in 2014. Since October, the Iraqi forces, backed by a U.S.-led air coalition, had been trying to dislodge Daesh from Mosul, the terrorist group's last stronghold in northern Iraq.

Meanwhile, touching upon the Gulf Crisis, Erdoğan said that they want the crisis to be solved as soon as possible.

"We have done and have been doing everything that we can to overcome the tension. We do not want any crisis in the region," he said, adding that dialogue was the best way to reach a solution and the parties should make themselves open to discussions.

"In order to have a political solution in Syria, the conditions in the field should be dealt with first," the president said.

He also added that significant steps have taken in terms of the cease-fire during the Astana talks.