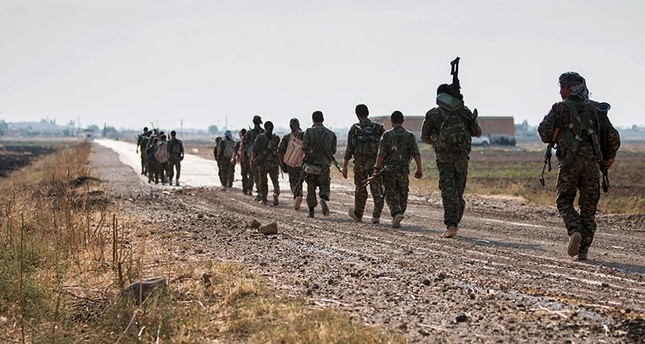 YPG militants walk carrying their weapons towards Tel Abyad of Raqqa governorate after they said they took control of the area from Daesh terrorists on June 15, 2015 (Reuters Photo)
by Daily Sabah Jul 11, 2017 12:00 am

A spokesman for the U.S. State Department said late Tuesday in a press conference that the Syrian Democratic Forces (SDF) will not join an anti-Daesh coalition meeting due to take place in Washington D.C. next week.

The SDF is an umbrella organization comprising of mostly People's Protection Units (YPG) terrorists. The YPG is the armed wing of the Democratic Union Party (PYD) which is considered the Syrian affiliate of the PKK.

PKK is recognized as a terrorist group by the U.S., EU, Turkey and many other countries.

Yet, the U.S. views the YPG as its "ground force" and abets it, despite strong objections by Turkey and Syrian people living under its rule.