Parliamentary rights commission head: Terrorists should not be able to treat Germany as their backyard 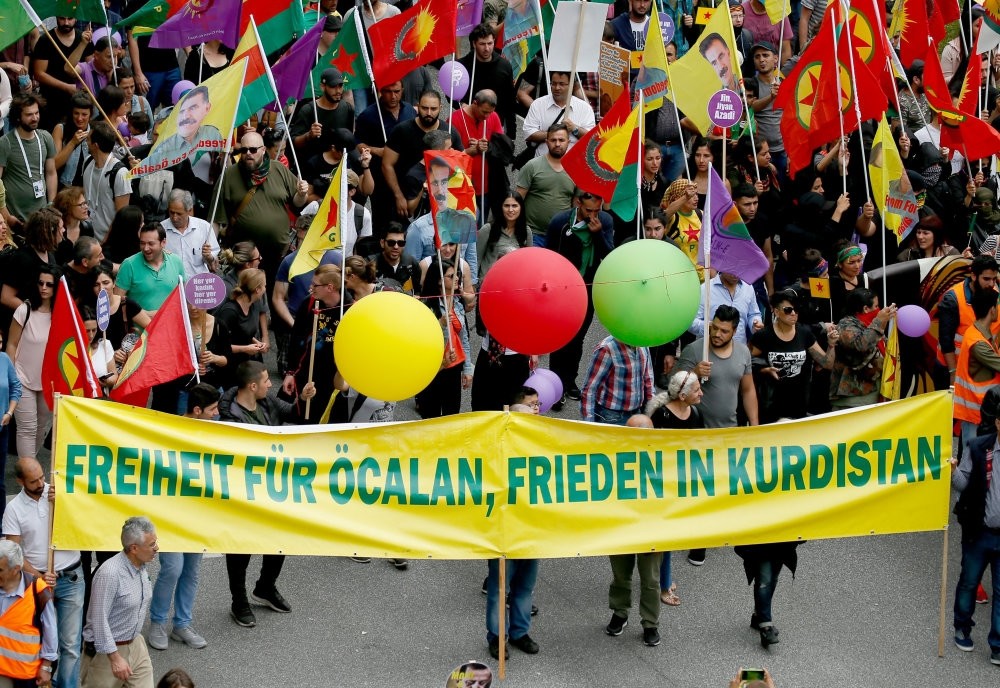 A group of PKK supporters march with a banner reading ,Freedom for u00d6calan, peace in Kurdistan, on the ,Unlimited solidarity instead of G20, demonstration during the G20 Summit in Hamburg, Germany, July 8, 2017.
by Anadolu Agency Aug 02, 2017 12:00 am

Mustafa Yeneroğlu, the head of Turkey's parliamentary Human Rights Commission, has said that terrorists should not be allowed to treat Germany as their "backyard."

Speaking to Anadolu Agency (AA) yesterday, Yeneroğlu, who grew up in Germany himself, echoed Turkey's criticism of German policies in the wake of last year's attempted coup.

Since the July 15 putsch bid, a number of suspects linked to the Gülenist Terror Group (FETÖ), which Ankara accuses of perpetrating the coup bid, have sought and found refuge in Germany.

"Germany should not become the backyard of terrorist organizations that threaten Turkey's security and make attempts on the lives of Turkish citizens," Yeneroğlu, also a lawmaker from the ruling Justice and Development Party (AK Party), said.

"Bombings of the parliament building, a plot to kill the country's president, killing 250 innocent people and using artillery on civilians are not something German politicians deal with," he told AA.

"German politicians who came to Turkey to visit the bombed-out Parliament used completely different words in Turkey and after going back to Germany," he said.

More than 250 died and 2,200 injured in attacks by a group of rogue troops trying to seize power on the night of July 15 last year.

Yeneroğlu, a University of Cologne law graduate, said Germany had not responded sensitively to the coup attempt and has failed to take action against suspected FETÖ members.

FETÖ is known to run dozens of private schools, businesses and media organizations in Germany and reports in Turkish media have claimed that around 4,000 FETÖ suspects fled the country after the failed coup.

Meanwhile, Ankara has repeatedly requested the extradition of key suspects but has so far been denied by the German authorities, calling for firm evidence of alleged crimes.

Apart from FETÖ, Turkey has also accused Berlin of turning a blind eye to the activities of the PKK supporters and those linked to far-left terror groups in Turkey.

In particular, the PKK has a large network in Germany where it carries out significant propaganda, recruitment and fundraising activities. The PKK has waged a terror campaign against Turkey since 1984 that has led to more than 40,000 deaths. It is a designated terror group in Turkey, the U.S. and the EU.

"Fighting terrorism is an area where every country should cooperate," Yeneroğlu said, adding, "On such an issue, when Turkey's security is at stake, it is troubling to see that Germany and Turkey don't share the same priorities."

He added: "Germany hasn't objected to the PKK-linked groups, sympathizers, fundraisers and militant recruitments taking place in the country. Politicians said the PKK is outlawed in Germany but they've done nothing to address the points mentioned in a report by the Federal Office for Protection of the Constitution."

According to the report, the PKK raised more than 13 million euros in Germany between September 2015 and early 2016.

Germany and Turkey share deep ties, with millions of ethnic Turks living in Germany and thousands of Germans holidaying on Turkish beaches every year. Trade between the NATO allies stands at around $36 billion a year.

However, in recent months, relations between Turkey and Germany have deteriorated over several issues, such as the arrest of a German human rights activist in Turkey, and Berlin's failure to act against terror suspects.

"Both countries can take strength from each other. Turkey, with its young population, growing economy and its geostrategic location, and Germany, with its technology and a strong economy, are very important partners.

"After the federal elections next month, I'm hoping for a trend and rhetoric in German politics and media that would show empathy toward Turkey and try to understand it," he said.