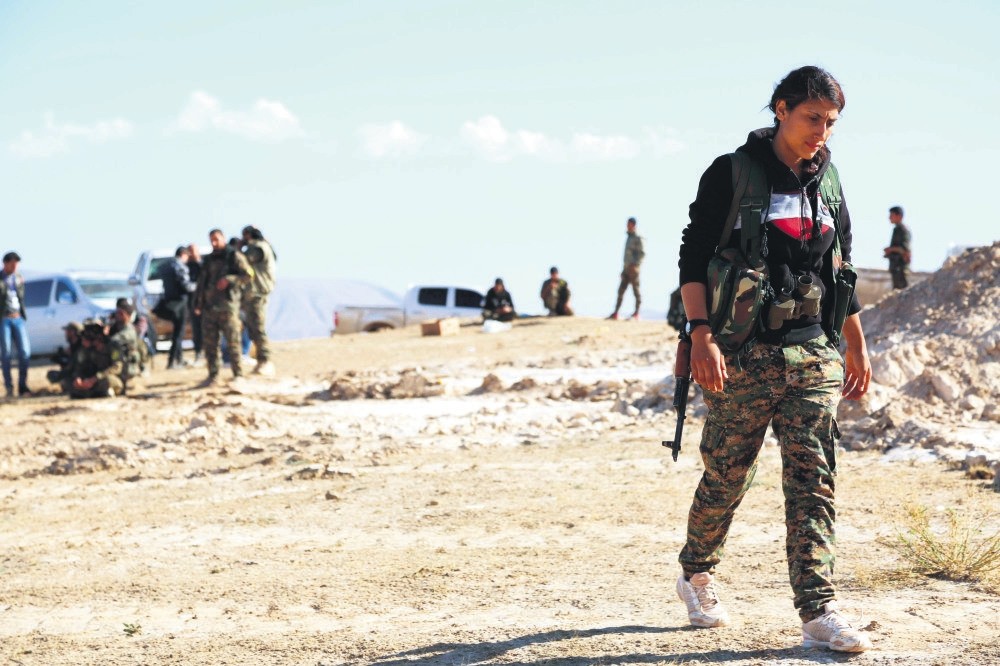 Several reports from national and international organizations cite several cases of abuse of women and children, giving evidence of the PKK and its affiliates forcibly recruiting underaged girls, without the consent of their families, along with other abuses. Yet, despite this evidence, western media remains silent on the issue

The abduction and exploitation of women by the PKK continues with the latest incident revealing that a young woman named Leyla Güneş was shot by PKK terrorists and survived death while trying to escape the terrorist organization last week. Yet, similar to many other cases of abuse of women, Güneş's story was not covered in Western media, which overlooks PKK abuses and tends to glorify the PKK and other terrorist organizations affiliated to it, such as the Democratic Union Party (PYD) and its People's Protection Units (YPG) militia, by portraying violations of human rights as freedom fighting women.

Güneş, who was brainwashed into joining the PKK three years ago, was saved from the terrorist organization and reunited with her family. She was only 15 when the PKK reached out to her and her friends when they were picnicking. Her mother tried to contact her and other PKK members in order to have her released, but failed each time. Three months ago, however, Güneş decided to surrender to security forces. Yet, when Güneş began running toward the military units who came for her, to surrender, other militants in a cave threw grenades at her before shooting her.

Thought to be dead after security forces killed the other militants, Güneş was sent to a hospital morgue until it was realized that she was still alive. Now Güneş suffers from memory loss and receives psychological treatment to recover her three lost years. 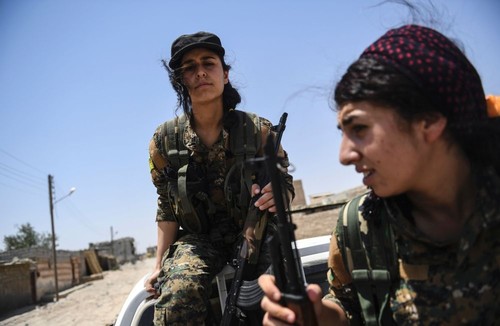 Güneş is only one example of dozens of young women who suffer from similar exploitation in PKK ranks. There are many reports from surrendered female terrorists, saying that they were forced to fight against Turkey.

A video the Turkish Armed Forces (TSK) released in May shows another young woman from the PKK, Zehra K., who also surrendered, and who in another video says that she was fooled by the terrorist organization: "My biggest mistake was to be fooled by the PKK. Because the PKK is burning both the Republic of Turkey and the Kurdish nation. So what I want to say to young people is that the organization forced me into this, but what I understand [now] is that they should take refuge in the state."

In addition to abduction, it are also several cases in which the husbands of kidnapped women have had their lives threatened while the women were facing several abuses, including rape.

The book "The Escape to Freedom," which was written in the 2000s by a women who escaped from the PKK, reveals her and other women's experiences while in the terrorist organization. Joining the PKK when she was 13, Dilaram (a pseudonym) says in the book that even the women who joined voluntarily eventually find that they are oppressed and abused and are unable to leave. Even if they want to escape, there is a high possibility that they will be executed. An example is the story of five female PKK members who were claimed have been consumed by toxic fumes released from a generator in 2011, but turned out to have actually been executed.

An Interior Ministry report in February, "Exploitation of Children and Women by PKK/KCK [Kurdistan Communities Union] Terrorist Organization," cites several cases of abuse of women and children, but also points to other reports from international organizations concerning the issue.

Reports by Human Rights Watch, for instance, say that the YPG uses children under the age of 18 and the PYD and YPG does not deliver its commitment to discharge child soldiers, similar to reports from the U.N. Independent International Commission of Inquiry. A Human Rights Watch report with several interviews with families says that any children appeared in PYD youth centers without the knowledge of their families and afterwards, no communication was available with them and families figured that their children joined or were forcibly recruited at a later time.

"In May 2015, the YPG and the Women's Protection Units (YPJ) announced compulsory 'self-defence duty' for all those aged 18 and older in the Kurdish canton of Afrin in the northern part of the Aleppo Governorate; however, in April 2015, a 16-year-old girl in Aleppo was allegedly recruited by the YPJ against the wishes of her family," the U.S. State Department June 2016 "Trafficking in Persons Report" says. 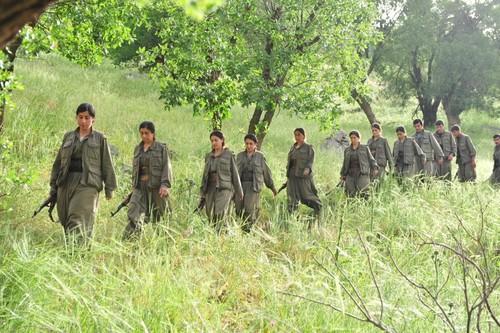 Female YPJ terrorists arrive on the frontline on the eastern outskirts of Raqqa, Syria on July 18, 2017.

Similarly, according to the report by Kurds Watch, people are compulsorily recruited through the so-called self-defense law, adapted by the PYD, and children up to age 12 are subjected to the practice, as well. "While adults are trained in Syria, children are taken to the PKK's camps in northern Iraq," the report added, emphasizing that this issue is against international law.

Reports from Kurds Watch also cite stories of women's suffering, including Fatıma Salim Ali's. "Fatıma Salim Ali, one of many child militants used by the PYD/YPG, was recruited by the terrorist organization at age 12. During the interviews, her parents told that Fatıma suddenly disappeared and they didn't want their daughter to join the organization – although they were supporters of PYD/YPG – as well as they were prevented from contacting with their child at later stages," the report said.

However, in spite of this evidence and the stories of many abused women, Western media continues to stay silent on the issue. Rather than revealing the true face of the terrorist organization, many media outlets glorify the PKK and other organizations linked to it, including the PYD and YPG. The portrayal of female terrorists as freedom fighters as well as pointing to the high number of female fighters to highlight how the terrorist organization gives importance to gender equality are the main themes while mentioning the PKK.

The internet is full of pictures of and articles on female PKK fighters who are glorified and act as heroines by highlighting their fight against Daesh. Yet, there are few sources that show the abusive acts of the terrorist organization on the women. Abductions, forcible recruitment, the armament of under-aged girls as well as rape seem to be seen as insignificant in the Western media compared to the fight against Daesh.

Last year, The New York Times published an article by Rod Norland with the headline: "Crackdown in Turkey Threatens a Haven of Gender Equality." The article was one of the best examples of glorification of female PKK fighters, with claims like "Kurdish guerrilla units are fully integrated by gender," and that the outlawing of the terrorist organization by the Turkish government is "one big problem with this aspect of Kurdish life in Turkey." Praising the PKK's vision, the article further claims that it "may be a terrorist organization in the view of the Turkish government, Europe and the United States, but it has also long made women's rights a centerpiece of its political platform."

Responding to and condemning the article, the Women and Democracy Association (KADEM) published its own article, stating that the term "gender equality" was abused by using what it called blatantly false information.

"With this article in The New York Times, the Western media has produced a false image of female PKK fighters, tying together women's struggle for freedom and equality and their militarization in a terrorist organization. The PKK's radicalization of women with the incitement of violence should not be interpreted as emancipation," the KADEM's article says, adding that the PKK has not decreased violence against women and has instead pulled them into a vicious cycle of violence, socially justifying it through the women themselves.

"Kurdish girls are taken hostage, made hostile to their families and society and are militarized with psychological and ideological oppression. They are forced to live with a cold, numb identity that glorifies destruction and fighting," the article says.

However, the article in The New York Times is not the only one that manipulates facts regarding the PKK. Another example is Marie Claire's article titled "These Remarkable Women Are Fighting ISIS. It's Time You Know Who They Are." The article makes heroines out of the female PKK terrorists while failing to see that they have been radicalized. The same article was also published in Esquire magazine.

Similarly, Russia Today published a documentary titled "Her War: Women vs. ISIS: Women against DAESH". Focusing on the training process of the female terrorists, the documentary says that the age of those who join the organization falls to 16, but it has been claimed that the only precondition for joining is to be unmarried.

Outside of the media, the fashion retailer H&M's 2014 collection was inspired by the female terrorists of the YPJ, which, the company later apologized for. This is another noteworthy attempt to turn terrorists into heroes and overlook the suffering of abducted women.