Turkey hints at new ground offensive against PYD in Syria 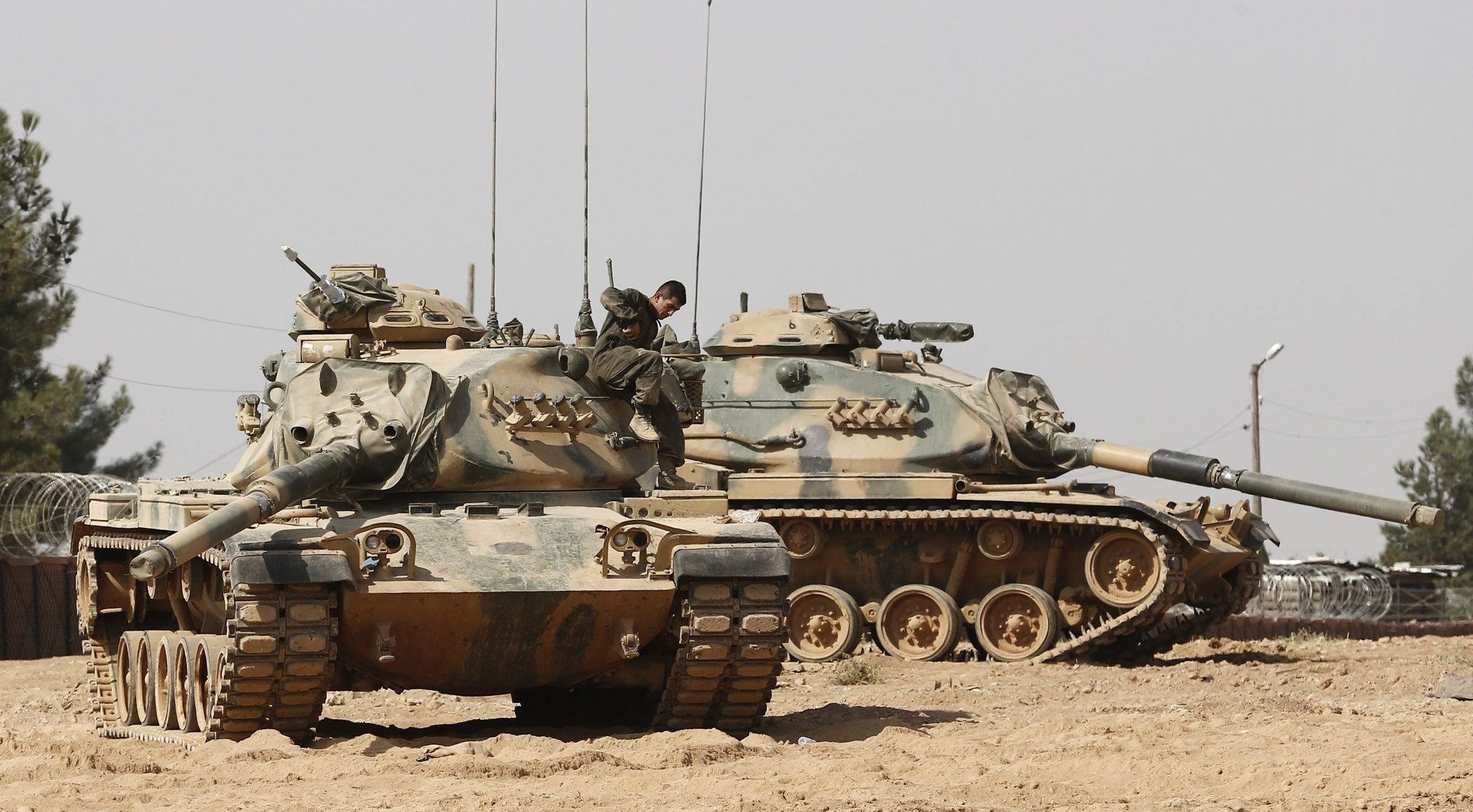 A Turkish soldier is pictured on his tank during Turkeyu2019s Euphrates Shield against Daesh.
by Daily Sabah Aug 07, 2017 12:00 am

Speaking in eastern Turkey's Malatya, President Recep Tayyip Erdoğan said Turkey remains determined to launch ‘new moves' akin to its foray into northern Syria in August 2016. Referring to Daesh, he said the situation in Syria goes beyond a war on a terror organization.

Turkey signaled a new ground offensive in Syria as President Recep Tayyip Erdoğan said Saturday the military will make new moves in the region. At the same time, locals in northern Syrian districts have called on Ankara to cleanse the area from the Democratic Union Party (PYD). President Erdoğan said Turkey remains determined to launch "new moves" akin to its previous foray in northern Syria in August 2016. "It's clear that the situation in Syria goes beyond a war on a terror organization," Erdoğan said during his address to a large crowd at a stadium opening in eastern Malatya province, while referring to Daesh and alluding to the PKK-affiliated PYD's aspirations for autonomy and statehood.

"We would rather pay the price for spoiling plans against our future and liberty in Syria and Iraq rather than on our own soil," Erdogan said. "Soon we will take new and important steps," he asserted. Erdoğan's message on Saturday was not the first time that Ankara has hinted at the possibility of a new operation on Syrian soil. Speaking in front of a large crowd in the border towns of Akçakale and Ceylanpınar located across from areas held by the PKK's Syrian armed wing, the People's Protection Units (YPG), Erdoğan said in late June, "Despite whoever is by your side [the U.S. coalition], you should know that Turkey, with its armed forces, will not let a state be formed in northern Syria."

"We told the U.S. as well. If there is such a thing, our struggle there will be different," Erdoğan said, signaling that Turkey is prepared to intervene in the northern Syrian town of Afrin at any time, currently held by the PYD.

Meanwhile, protests were held against the PKK/PYD in the northern Syrian towns of Azaz, Jarablus and al-Bab. Thousands of Syrians gathered in the Azaz district after the Friday prayer and demanded the retreat of the PKK/PYD "from the lands of Arabs," condemning their assaults on their district and Mare.

Syrians held "revolution" flags and carried banners in Arabic, English and Turkish, saying: "Our only option is to carry out military action against the PYD. The PYD only kills children. Arab, Turkmen, Circassian, and Kurdish people are brothers in spite of the PYD, and the PYD must retreat from the lands of the Arabs. Take the terrorists out of Kandil and from the lands of the Arabs. The PYD is the devil."

The people in the group chanted slogans such as: "PYD, take the dogs you brought from Kandil and get out from the region. Euphrates Shield Forces and the Free Syrian Army, evict the PYD from the region."

Addressing the demonstrators in Azaz, Imam Muhammed Akkaş said: "The PYD shall retreat from the lands it occupied. If you do not retreat now, tomorrow will be too late for you. PKK, every day you kill children in attacks. You will pay for this one day, and that day is not far away."

Velid El Mahmud joined the protests, saying: "Our demand is for the PYD's eviction from the Arab lands it occupies. The PKK/PYD captured Arab provinces betraying the Syrian revolution. We want Euphrates Shield to take back our lands that the PYD has occupied."

"The public, whose lands are occupied by the PYD north of Aleppo, is holding protests right now. Syrian blood is valuable. Whoever kills Syrians and displaces them from their homes is a murderer," said Milad Eş Şahabi, another participant in the demonstrations.

The same protests were held in Jarablus and al-Bab, which were retaken from Daesh as part of Operation Euphrates Shield. In the protests, people demanded that the PYD leave their lands.

Such protests have been held regularly in Syria. A similar one was held last month in Aleppo province's district of Mare by the public after the PKK opened fire on workers in farm lands of the city, killing a young girl and injuring two civilians. In the protests, it was stressed that the PKK should leave the region. The people of Mare chanted slogans against the PKK/PYD carrying banners saying, "The Turkish soldiers are our brothers and allies." People from other villages also attended to the protests. One of the demonstrators, lawyer Mahmud Nacar stated: "Our revolution against the regime, Shiite militia and the PYD continues. All of these are terror organizations. The revolution will continue until it becomes successful. We want to thank Turkey and the Turkish people for their support."