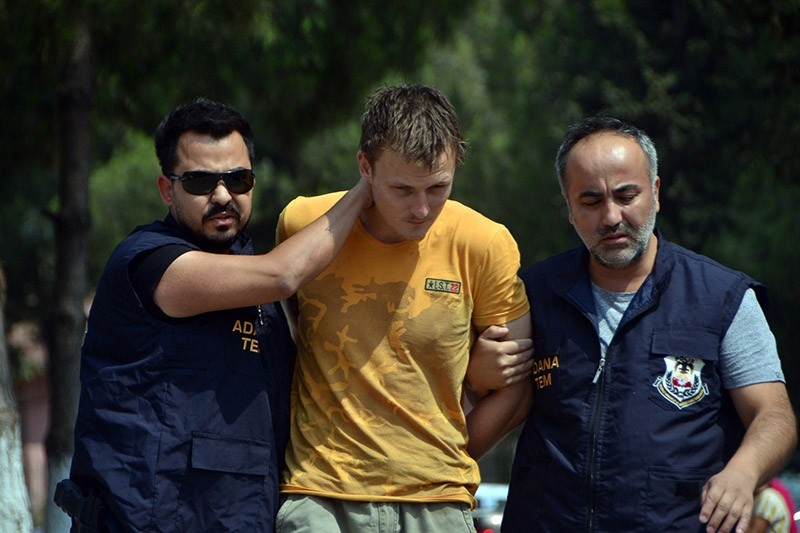 Daesh suspect planning drone attack on Incirlik base brought to the police station by Adana police (DHA Photo)
by Daily Sabah with Agencies Aug 10, 2017 12:00 am

Turkish police have detained a suspected Daesh terrorist who was allegedly planning a drone attack on U.S. aircraft at Incirlik air base in southern Adana province.

A Russian national identified as Renat Bakiev was reportedly detained in the southern Turkish city of Adana over suspicions that he planned to crash an American aircraft at the base using a drone.

He was also planning to carry out attacks on Alevi associations and citizens in the city, a statement by the police said.

Police said Bakiev had confessed to being a member of Daesh and being in Adana to carry out an attack for the terror group.

He had been in contact with the terror group via the Telegram messaging app to raise TL 2,800 to buy an aerial drone, the statement added.

The Russian was previously the subject of a charge of membership of a terrorist group by the Chief Public Prosecutor's Office in the southern province of Kilis. He had also appeared in court in Tekirdağ province, northwest of Istanbul, for making threats.

Recently in June, Adana couterterrorism police captured 11 Daesh suspects, including what the media called the Adana "emir" of Daesh, identified as 32-year-old Turkish national Abdulkerim Ç. for planning to carry out a truck bombing at the base.

The U.S. Air Force uses Incirlik air base, near Adana, as a staging post for the air campaign against Daesh in Syria and Iraq.