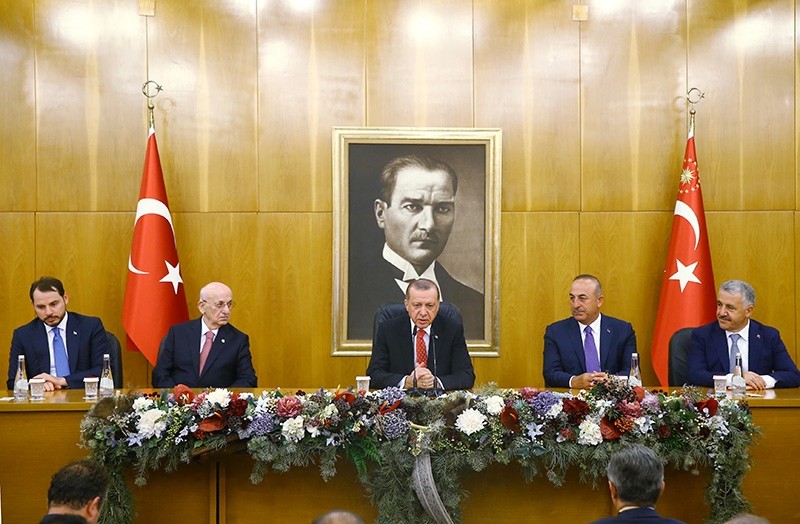 The possibilities of an Ankara-Tehran joint operation against the PKK terror group, and its branch in Iran, the Kurdistan Free Life Party (PJAK), has increased with officials from both neighboring countries making positive remarks about a cross-border offensive.

Speaking to reporters Monday ahead of his official visit to Jordan in Istanbul, President Recep Tayyip Erdoğan said that "a joint operation with Iran against terror groups that are posing threat is always on the agenda."

"We have discussed the details on what kind of work we can carry out amongst us. There are damages that the PKK and its branch in Iran causes. We will carry out these discussions with the understanding that the threats can be defeated with the cooperation of both countries in a short time," Erdoğan said.

The PJAK, which is associated with the Kurdish Communities Union (KCK), the umbrella organization for the armed terrorist organizations the PKK, is the Iranian branch of the terror group. In Syria, the group goes by the Democratic Union Party (PYD) and its armed wing the People's Protection Units (YPG).

Although the PKK was headquartered in Syria until 1998, currently, the terrorist organization is now controlled from its headquarters in northern Iraq's Qandil Mountains. KCK terrorist groups function under the names of the PKK in Turkey and the PÇDK in Iraq.

The PKK, listed as a terrorist organization by the U.S. and EU, resumed its nearly 40-year armed campaign against the Turkish state in July 2015. PKK leader Abdullah Öcalan stated in an interview with the Iraqi television network Zelal in 2013 that "I founded the PYD as I did the PJAK."

The Turkish media reported Monday that during Iranian Chief of Staff General Mohammad Hossein Bagheri's visit to Ankara last week, Turkey and Iran discussed the likelihood of conducting a joint operation against the PKK this autumn.

Bagheri reportedly came up with the proposal for an anti-PKK joint operation.

The reports also claimed that Chief of Staff Gen. Bagheri had voiced Iran's concerns regarding the political and military support the U.S. provides to the PKK, expressing the thought that weapons and ammunition handed over to the PKK by the U.S. could be used against Iran in the coming years.

According to reports, the Iranian army chief also pointed out that the PKK has reached the capacity of freely transporting weapons in Iraq, Iran, Turkey and Syria. He highlighted the urgent need for a joint counterterror operation against PKK bases in the Qandil Mountains and in the region of Sinjar.

Consequently, Iran will finalize the details of its action plan by Sept. 5 and, in accordance with the plan, as many as nine joint operations are expected to be carried out in the last three months of the year.

Earlier this week, the Turkish and Iranian military chiefs agreed on a joint de-escalation zone mechanism in Idlib. The mechanism also includes the Russian military. The generals reached a mutual understanding regarding the future of the Syrian town to "sort out the issue easily."

In addition to the fight against the PKK and the joint mechanism in Idlib, Ankara and Tehran also saw eye-to-eye on the Kurdistan Regional Government's (KRG) independence referendum issue.

Gen. Bagheri after meeting with Erdoğan and Gen. Akar on Sept. 25 said that the KRG's independence referendum would trigger more conflict and bring negative consequences for the entire region.

"Both sides stressed that if the referendum were to be held, it would be the basis for the start of another series of tensions and conflicts in Iraq, the consequences of which would also affect neighboring countries," Bagheri said.