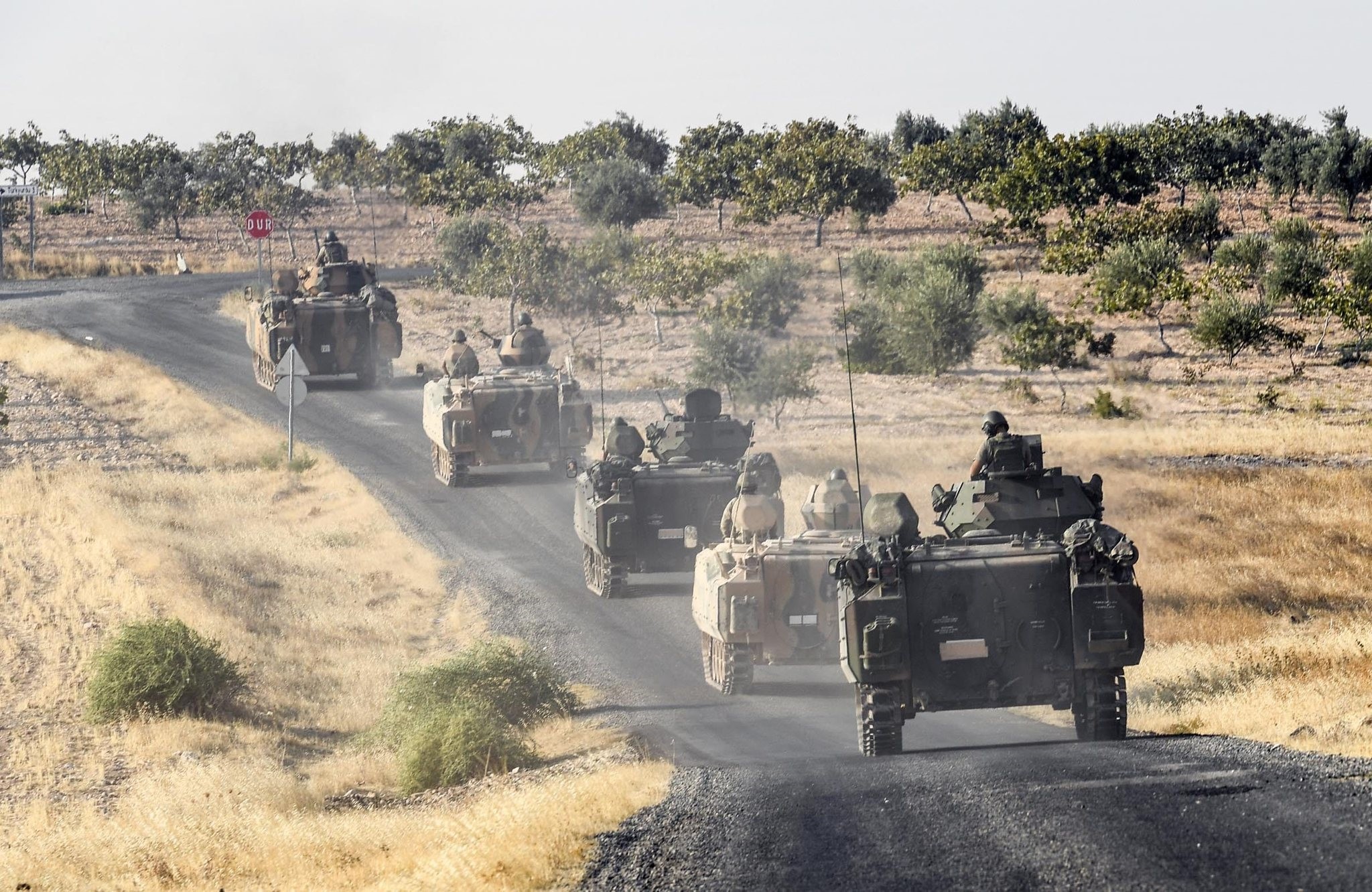 Turkish troops move toward the border with Syria as part of preparation in Operation Euphrates Shield last year.
by Daily Sabah Sep 01, 2017 12:00 am

In case of a threat from the PKK's Syrian wing PYD's and YPG, Turkey is ready to launch an operation similar to Operation Euphrates Shield, President Erdoğan said

Ankara has reiterated that it is prepared for a cross-border military operation into Syria if terrorist groups pose a threat to its national security. Speaking at the Victory Day reception at the Beştepe Presidential Palace in Ankara on Wednesday, President Recep Tayyip Erdoğan said that Turkey is ready to launch an operation similar to the Euphrates Shield, which commenced on Aug. 24 last year to clear Daesh terrorists from Turkey's borders with Syria and ended in March, in the case of a threat posed by the PKK terrorist organization's Syria affiliate the Democratic Union Party (PYD) and its armed wing, the People's Protection Units (YPG).

Highlighting that Turkey shares borders with Syria and Iraq, two countries that have been struck with terror and political turmoil for the past several years, President Erdoğan said, "Because of this, we will also take all necessary measures accordingly. We are ready. Also, they should know that whatever we did during Operation Euphrates Shield, we are also prepared to do the same thing again."

The remarks by the president came in a speech where he also underscored that Turkey cannot be cornered with terror groups in the region.

"Those who want to corner Turkey by using terror organizations will be left alone with these ticking bombs after a while," the president warned.

He said that Turkey owed its success in the fight against terror and cross-border operations to the steps taken in the country's defense industry over the last 15 years. He asserted that Turkey is not in a state of regression in any way, saying that the "veiled" embargoes, recent problems with allies and the Gülenist Terror Group (FETÖ) coup attempt have not affected the country's current or future plans, projects and operations.

President Erdoğan also said that the weapons supplied by Turkey's allies ended up in the hands of Daesh terrorists, adding that the very same weapons would be used against Turkey.

"The target is Daesh. Yet, right now, we see that our ally's weapons are in the hands of Daesh militants. What kind of an alliance is this? How are you acting together with NATO? All of these will eventually turn back and hit them, just like a boomerang," Erdoğan said, criticizing the U.S. government.

Recently media reports have also shown that some of the weapons seized from Daesh terror groups were in fact U.S. weapons. Previously in 2015, some of the arms air dropped to the PYD were delivered to Daesh terrorists by "mistake."

Ankara argues that the fight against terror should be carried out with local fighters as well as legitimate military forces, particularly speaking out against Washington's partnership with the PYD in Syria.

While Turkey sees no difference between the PYD and the PKK, which is considered a terrorist organization by the U.S., the EU and Turkey, Washington has chosen the Syria Democratic Forces (SDF), led by the PYD's armed wing, the YPG, as its most effective partner against Daesh.

However, the Turkish government argues that one terrorist group cannot be picked as a partner against another one, adding that U.S. military support for the PKK's Syria affiliate could eventually be used against Turkey.

The PYD/PKK's ultimate aim is to establish a self-declared autonomous canton from Syria's northwestern Afrin to the Kobani and Jazeera cantons in the northeast. Moderate opposition groups oppose this, arguing that it would threaten Syria's territorial integrity.

Six civilians were injured in a rocket attack on Wednesday by the YPG militia in Azaz, a town in northern Aleppo.

Speaking to Anadolu Agency (AA), Hasan Ibrahim, who is the head of civil defense in Azaz, said that the YPG targeted settlements in Azaz with multiple rocket launchers. The six people who were injured in the attack received treatment in health centers in the region.

The YPG constantly attacks Azaz with howitzers and Grad missiles. The terrorist organization is known for attacking civilians and causing demographic changes in the country. Earlier in June, a video showing the YPG torturing civilians in no Raqqa was obtained by AA. The footage showed images of two YPG soldiers beating tied-up civilians in Mansura, Raqqa. It was also reported that U.S. forces recently intervened when YPG militants plundered homes in Raqqa. A confrontation occurred between locals and some YPG members due to their unlawful practices. Some Syrian Kurds who escaped from their hometown Kobani in 2014 due to the war with Daesh and took refuge in Turkey, also say that they cannot go back to their homes due to PYD oppression.