US complicit in terror if YPG arms turn toward Turkey, Erdoğan says 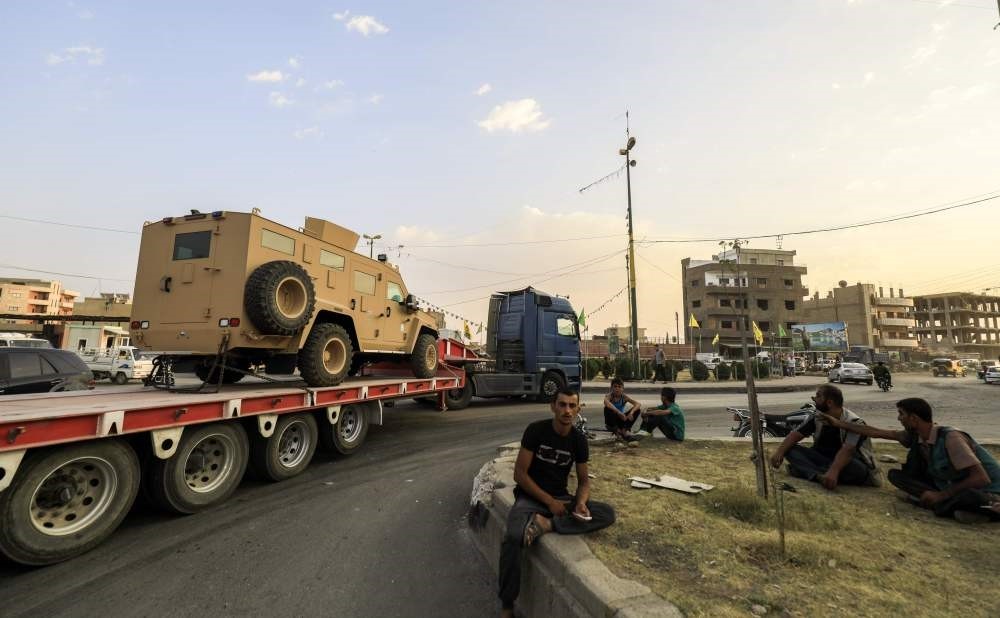 Speaking at the Bloomberg Business Forum in New York, President Erdoğan said that a terrorist organization cannot be used to defeat another one and yet, the U.S. is cooperating with the YPG against Daesh despite the existence of Turkey as an ally, which has killed more than 3,000 Daesh terrorists up until today

President Recep Tayyip Erdoğan shared his concern on Wednesday that the arms supplied by the U.S. to the People's Protection Units (YPG) and the Democratic Union Party (PYD) could be used against Turkey in the future, while adding that it was surprising for a democratic country such as the U.S. to side with one terrorist organization with the aim of defeating another. Speaking at the Bloomberg Business Forum in New York, President Erdoğan said that one terrorist organization cannot be used to defeat another and yet, the U.S. is cooperating with the YPG against Daesh.

"It is wrong for the U.S. to fight with the PYD and YPG. I shared my thoughts on this issue with U.S. authorities," the president said, saying that although the U.S. officially recognizes the PKK as a terrorist organization it does not identify the group's Syrian affiliates, the PYD and YPG, as one.

"How can the U.S. supply weapons that we cannot buy to these terrorists? This is a question that we will ask to our friends in the U.S.," Erdoğan said, while adding that the amount of support supplied to the terrorist organization by the U.S. surpassed 3,000 truckloads of weapons.

"There are vessels, artillery, machine guns and armored vehicles supplied to them. In Turkey we are wondering who can guarantee us that these weapons that came to northern Syria will not be used against us in future?" he asked.

Turkey considers the PYD and its armed wing, the YPG, Syrian affiliates of the PKK, a proscribed terrorist organization.

In an interview with PBS network during his New York visit on Monday, Erdoğan also asked, "When we are not able to acquire these weapons from the United States, how are you giving those weapons to terrorists in Syria?"He added that this was a question that will be asked to the authorities in the United States.

"And when these questions are not answered, we feel sorry as a strategic partner of the U.S.," he said.

The president also criticized countries that continue to support the PYD and PKK. In a speech during the 72nd session of the United Nations General Assembly, Erdoğan said the PKK and its linked groups are "solely trying to change the demographics of Syria" under the claim of fighting against Daesh.

While the U.S. says that supporting the YPG is the only option for defeating Daesh, Ankara says an alternative can be found with local Arab tribes backed by countries in the region instead of supporting and arming a "terrorist group."

Meanwhile on a separate issue the president criticized the U.S. for filing charges against his security detail for incidents which took place in May, saying that two out of four staff who are accused by the U.S. were not even in the country at the time. He said that the U.S. indictment targeting his security detail is politically biased.

Expressing that President Donald Trump is closely following developments regarding the indictment on his security detail, Erdoğan said that he has told his U.S. counterpart that the decision to press charges was a mistake.

He highlighted that no charges have been filed against pro-PKK demonstrators who attacked Turkish supporters near the embassy.

During Erdoğan's visit to the U.S. back in May, supporters of the PKK terrorist organization, officially recognized as such by the U.S., triggered a brawl outside of Turkey's embassy in Washington, D.C. The first fight reportedly broke out at the Turkish embassy on May 16 when supporters of the terrorist group threw water bottles at Turkish citizens, triggering a 10-to-15 second scuffle in the middle of the road.

Only two U.S. officers interceded in the fight and it was clear the police were not ready, as there were only around 10 police officers outside the embassy.