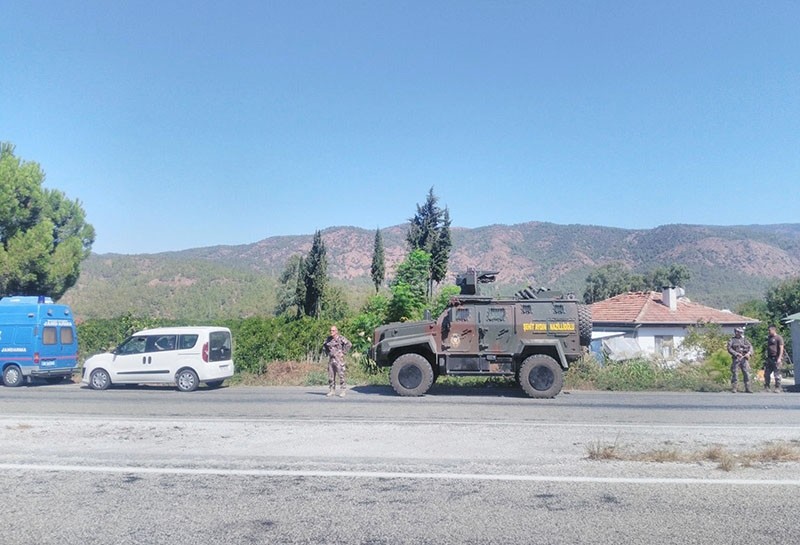 Interior Minister Süleyman Soylu said Thursday that PKK terrorists are infiltrating into Turkey's Aegean and Mediterranean regions through the Syrian port city of Latakia, which is under Assad regime control, amid a rising number of operations targeting the terrorist group in the region.

In the armed clash, five terrorists were killed, and the operation continues to locate and capture two remaining terrorists. One soldier suffered injuries to his foot.

Four terrorists and three collaborators were also detained Wednesday at a police checkpoint in Seydikemer district. Authorities stated that the two groups were acting independently from each other.

Speaking about the latest operation, Soylu said that the PKK, upon increased security measures on the border with Iran, Iraq and PKK/PYD-held Afrin in Syria, is now seeking to infiltrate into Turkey through the Aegean and the Mediterranean seas. "Terror group's leaders have ordered terrorists to infiltrate Muğla, Köyceğiz, Fethiye and İzmir from Latakia over the sea, by arriving into the open sea through ships and then reaching the shore with lifeboats or small vessels," Soylu said.

Controlled by the Assad regime since the outbreak of the civil war, Latakia is Syria's main seaport and the largest city on the Mediterranean.

Damascus had long supported the PKK against Turkey, until the Turkish ultimatum in 1999 for the Baath regime to suspend its ties with the terrorist group and kick its leader Abdullah Öcalan out of the country. The Syrian regime did not support the PKK in the following decade amid thaw in relations between Ankara and Damascus.

However, in the early years of the civil war, the Assad regime transferred the control of Kurdish populated areas in northern Syria bordering Turkey to its former ally's Syrian offshoot Democratic Union Party (PYD) and its armed wing People's Protection Units (YPG), which is currently the main partner of the U.S. on the ground.

The PYD-controlled areas, namely Afrin in the northwest, Kobani in the center and Qamishli in the northeast, aimed both to harass Turkey through logistics, training and arms support to the PKK, while forming a barrier with moderate opposition groups and Turkey, one of their main backers.

Throughout the course of the civil war, Turkey and opposition groups accused Assad regime and the PYD of cooperating with each other.