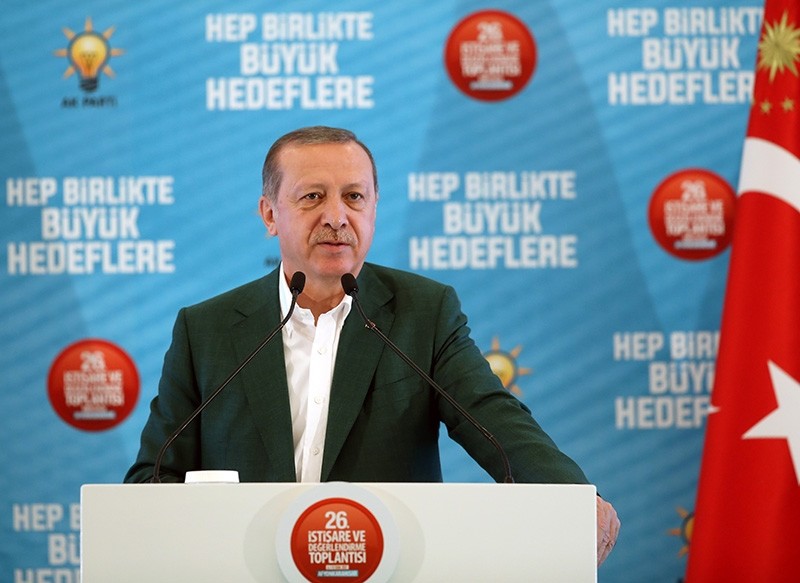 Speaking at the Justice and Development Party (AK Party)'s consultative meeting in western Turkey's Afyonkarahisar, the president said: "Today a landmark operation is underway in Idlib, and this will continue. We will never allow a terror corridor along our Syrian border."

Erdoğan said that Turkey aimed to provide security for Idlib by extending the area cleared from terrorists in Operation Euphrates Shield, and added that operations in the region would continue.

The president also underlined that Turkey would not allow separatist operations in Iraq and Syria, just as "we haven't allowed such operations within our borders."

After addressing the audience at AK Party's consultative meeting, Erdoğan also told press representatives that Turkish soldiers had not yet entered Syria's Idlib and were not yet involved in the operation, adding that the Free Syrian Army (FSA) was currently conducting the operation in the region.

The Turkish Armed Forces (TSK) is currently supporting the FSA from within Turkey's borders, while Russian forces are providing air support to the operation, Erdoğan said.

The head of Turkey's National Intelligence Organization (MIT) Hakan Fidan also accompanied Akar and the generals during the visit.

Erdoğan last month said that Turkey would deploy troops in Syria's northwest Idlib province as part of a de-escalation agreement brokered by Russia in August.

Ankara launched Operation Euphrates Shield against Daesh last year on Aug. 24, backing FSA forces inside Syria, and recaptured several towns near its border from the terror group, including Jarablus, al-Rai, Dabiq and al-Bab. The operation dealt a heavy blow to the terrorist group's dominance in Syria.

In the operation, Daesh strongholds were defeated and more than 2,000 square kilometers of territory in northern Syria was seized from the terrorists. More than 50,000 Syrian refugees were relocated back to their hometowns in the liberated areas.