Turkey will not allow a terror corridor along its borders, Erdoğan says 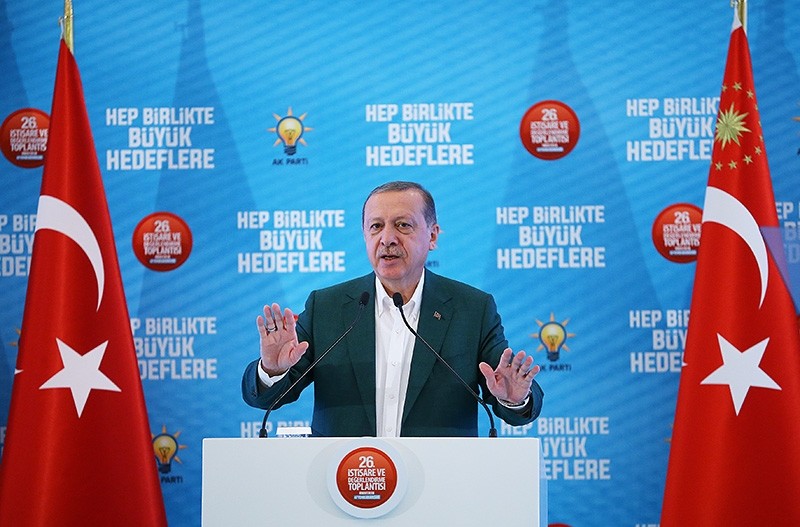 President Recep Tayyip Erdoğan said yesterday that the Free Syrian Army (FSA), backed by Turkey launched an operation in Idlib in the scope of a de-escalation agreement reached in the latest Astana talks amid attempts to prevent the formation of "terror cantons" being established along its border with Syria. Speaking at the 26th Consultation and Assessment meeting of the Justice and Development Party (AK Party) in central Afyonkarahisar province in Turkey, Erdoğan emphasized that developments in Syria and Iraq are "directly related to Turkey's national security," adding that Ankara is resolute "to solve the problem at its source."

"Intense efforts are being made to establish a new terror state at our border, and we will not remain silent about this," Erdoğan said amid the ongoing operation in Idlib by the Turkey-backed FSA in targeting terrorist groups. Turkish media outlets previously reported that one of the aims of the operation is to surround the Afrin area, which is controlled by the PKK's Syrian offshoot, the Democratic Union Party (PYD), and its armed wing, the People's Protection Units (YPG).

"We aren't interfering in any other country's internal affairs. Our aim is to maintain Turkey's national security. If we don't go to Syria, Syria comes to us. There are millions of people in Idlib, and we will protect them," Erdoğan said.

Speaking on the issue at the same meeting, Prime Minister Binali Yıldırım said Turkey is cooperating with Russia to ensure safety in Syria's northern Idlib province.

The prime minister stressed the importance of ensuring de-escalation near Turkey's border with Syria. "We will ensure safety in Idlib and cooperate with Russia," he said.

According to information obtained from security sources, the Turkish Armed Forces (TSK) conducted artillery fire to back the FSA fighters that crossed into Idlib province.

The head of Turkey's National Intelligence Organization (MİT), Hakan Fidan, also accompanied Akar and the generals during the visit.
Foreign Minister Mevlüt Çavuşoğlu said Saturday that Turkey aims to ensure clashes are entirely prevented in Syria's northwestern Idlib province, which will result in the facilitation of the political process.

"Astana is a platform which, in a way, will stop clashes to boost confidence-building measures. However, our main goal is to revive the Geneva process," Çavuşoğlu was quoted as saying, according to Anadolu Agency (AA).

The minister noted that intelligence units and troops will evaluate the situation on the ground and take steps accordingly.

Ankara is currently carrying out a landmark counterterror operation to prevent a terror corridor from being established through the PKK's PYD/YPG by cutting off the Idlib-Afrin corridor by blockading Afrin.

President Erdoğan also announced Saturday that a "major" operation in Syria's northwestern Idlib province had been launched with the Turkey-backed FSA and air support from Russia, following international efforts for de-escalation in the war-torn country. Calling the operation a "new step" to establish security in Idlib, he promised that Turkey will not desert the civilians there.

Erdoğan last month said Turkey would deploy troops in Idlib province as part of a de-escalation agreement brokered by Russia in August.
He referred to the de-escalation zone agreement as a promising idea, under which Russians would maintain security outside of Idlib and Turkey would ensure security inside the Idlib region.

Meanwhile, President Erdoğan and his French counterpart Emmanuel Macron held a phone call Saturday to discuss the current situation in Iraq and Syria.

The two leaders exchanged views on developments in the region, as well as strengthening bilateral ties between Turkey and France.