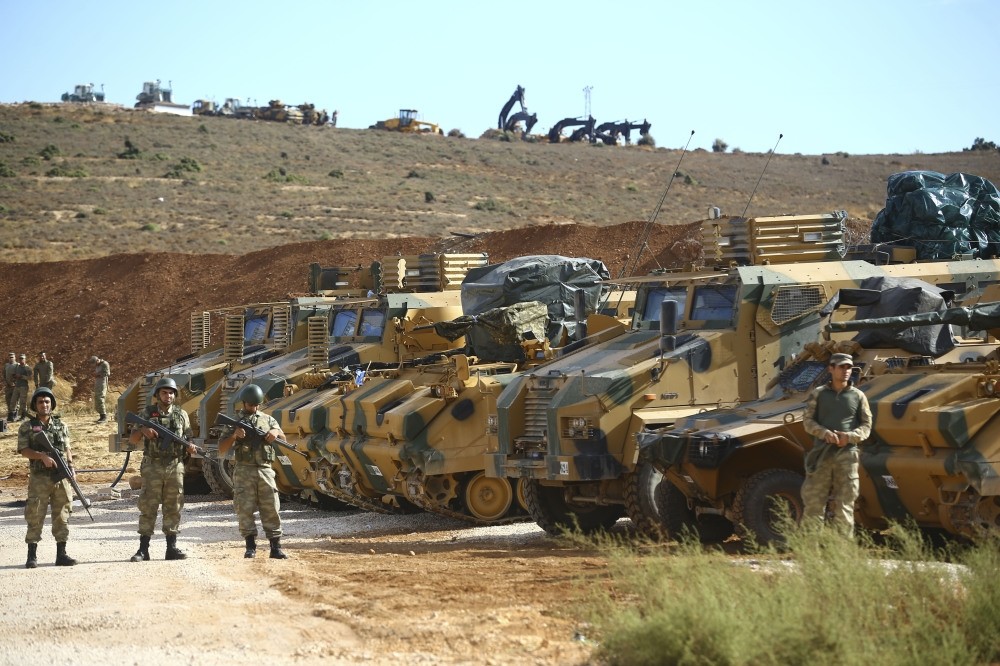 Turkish soldier and armored vehicles wait at the Syria-Turkey border in Hatay before the start of the operation.
by Daily Sabah Oct 12, 2017 12:00 am

Delivering a speech at an event in Ankara, Yıldırım said that Turkey is aware of a plan to establish a terrorist corridor within Syria. "We are on the field to make our precautions in advance," he said, asserting: "We are trying to establish a peace belt rather than terror."

Explaining that a decision was made during the Astana talks to ease the mounting crisis in Idlib and put an end to clashes in the area, Yıldırım said that Turkish troops have taken responsibility for that. 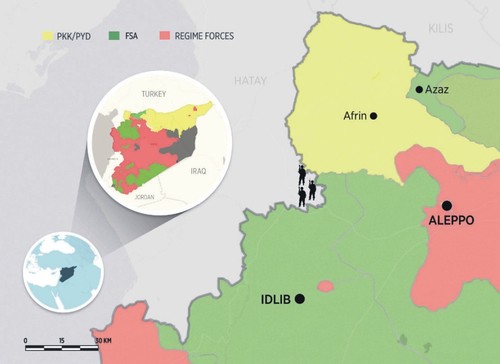 The Turkish Armed Forces (TSK) issued a written statement on Oct. 9, declaring that Turkish forces crossed into Idlib, Syria, on Oct. 8, to reconnoiter as part of efforts to bring peace to the area.

The statement said the goals of the de-escalation zones, which were declared on Dec. 30, 2016, and guaranteed by Turkey, Russia and Iran through the Astana process, aim to increase the effectiveness of the cease-fire agreement, end armed clashes, provide humanitarian aid to those in need, establish proper conditions for displaced people to return and establish conditions for a peaceful resolution of the conflict.

Meanwhile, it was reported yesterday in the Turkish media that the TSK would determine 14 spots in the area to establish security posts. Experts in the field are analyzing the feasibility of roads and terrain where armored vehicles and tanks are expected to roll in the upcoming period.

Experts are also trying to gauge the possibility of terrorist attacks against Turkish military elements and determine dangerous spots in a way only Special Forces can understand, a report in the Hürriyet daily claimed.

The report also contends that the TSK is working with local elements and Syrian locals to gather intelligence regarding the area and terrain. The duration of reconnaissance activities depends on the outcome of communication and intelligence sharing with local sources.

Control of the Idlib region is divided between moderate opposition groups and the al-Qaida-affiliated coalition of Hayat Tahrir al-Sham (HTS), which rejects the Astana process, which it is also excluded from. The operation aims to clear HTS from the region to maintain the cease-fire.

Turkey also aims to contain the Afrin region, which is controlled by the Democratic Union Party (PYD), the PKK affiliate in Syria, and its People's Protection Units (YPG) militia.

The operation is the second time in over a year that the Turkish military has crossed into Syria. The first, Operation Euphrates Shield, was launched onAug. 24, 2016, in collaboration with the Free Syrian Army (FSA) and helped liberate several Daesh strongholds, such as Jarablus, Dabiq, al-Rai and al-Bab. In the operation, a staggering blow was dealt to Daesh, and more than 2,000 square kilometers in northern Syria were seized. More than 100,000 Syrian refugees returned to their hometowns in liberated areas.