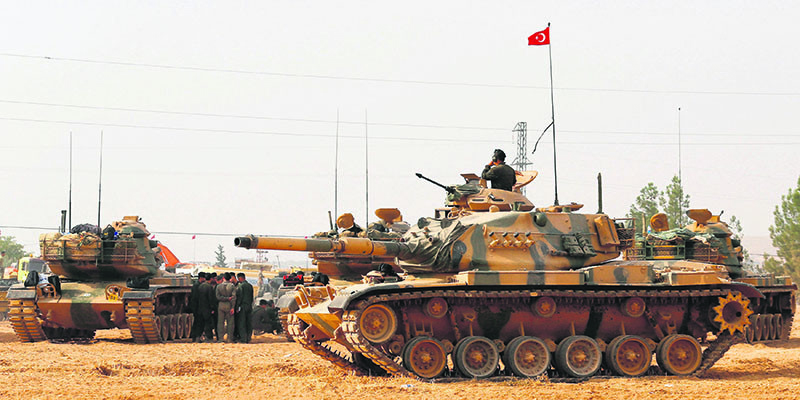 The President explained that the Turkish military crossed into Idlib to back the Free Syrian Army, aiming to eliminate terror threats from Turkey's borders and ensure the stabilization of the de-escalation zones in accordance with the Astana agreement

President Recep Tayyip Erdoğan said Friday that Turkey has crossed into Syria's Idlib province as part of its planned monitoring role in the de-escalation zones that was agreed on in the Astana talks and to eliminate terror threats from its southern borders.

"We had said that, 'We may come suddenly in one night when it is least expected,' and as you know our armed forces launched an offensive in Idlib last night with the Free Syrian Army [FSA]. Idlib borders us. As such, we need to take security measures. Nobody can ask us, 'Why are you doing this?' We are the ones with the 911-kilometer [566-mile] border with Syria and under constant threat and harassment," President Erdoğan said during his speech in Ankara at the Justice and Development Party (AK Party) provincial head meeting.

Ankara announced the deployment of Turkish troops on Saturday, saying Turkey was conducting an operation with the FSA as part of a "de-escalation" deal agreed upon during last month's meeting with Iran and Russia in Kazakhstan's Astana. Turkish troops have crossed into Syria's Idlib province to monitor de-escalation zones that aim to bring an end to the six-and-a-half-year conflict, the military said Friday.

Military convoys crossed the border from Reyhanlı in southern Turkey's Hatay province Thursday night. In a statement, the Turkish Armed Forces (TSK) said soldiers had begun establishing observation points."The Turkish Armed Forces continue to carry out their duties in the territory within the engagement rules agreed by the guarantor countries in the Astana negotiations," the statement stated.

As part of the deal set during the last negotiation talks in Astana, Turkey, Iran and Russia will reportedly each send 500 observers to Idlib to monitor de-escalation zones. President Erdoğan had previously said Turkey will be inside the city of Idlib, while the Russian forces will ensure the security of the outside zones. "In accordance with the agreement reached by the three guarantor states at the Astana meetings, observers from the three states will be deployed at checkpoints and observation posts to be established in the security zones that will constitute the borders of the de-escalation area. The principal task of the observer forces is defined as preventing the occurrence of hostilities between the regime and the opposition, as well as to monitor any cease-fire violations," a statement released by the Turkish Foreign Ministry after the latest meeting in Astana said.

President Erdoğan added that Turkey was the target of daily attacks and plots.

"Some of these attacks are made to distract our attention and our energy from critical developments in our region," he said.

"Those who supported terror groups, such as the Gülenist Terror Group [FETÖ] and the PKK, failed to corner Turkey [and] are taking now direct action," he added.

"The allied Turkish Armed Forces have entered Syrian territory and begun setting up observation posts," said Mustafa Sejari, an official in a FSA opposition group also involved in the operation.

Turkey sent a convoy of about 30 military vehicles into opposition-held northwest Syria through the Bab al-Hawa crossing in Idlib, rebels and a witness said. The TSK will eventually set up observation posts in more than 10 areas, beginning in northern Idlib and gradually extending to the southern part of the province.

The convoy was heading toward Sheikh Barakat, a high area overlooking opposition-held territory and the canton of Afrin - which is controlled by the Democratic Union Party (PYD), the PKK affiliate in Syria, and its People's Protection Units (YPG) militia, the witnesses said.

The TSK also issued a written statement on Oct. 9, declaring that Turkish forces crossed into Idlib, Syria, on Oct. 8, to reconnoiter as part of efforts to bring peace to the area.

The statement said the goals of the de-escalation zones, which were declared on Dec. 30, 2016, and guaranteed by Turkey, Russia and Iran through the Astana process, aim to increase the effectiveness of the cease-fire agreement, end armed clashes, provide humanitarian aid to those in need, establish proper conditions for displaced people to return and establish conditions for a peaceful resolution of the conflict. There were concerns that the Bashar Assad regime, backed by Iran and Russia, would launch more attacks in Idlib if the cease-fire failed to hold. In such a case, it was feared that millions of people might flood across the border into Turkey.

The Astana agreement with Assad's foreign allies Russia and Iran involves reducing warfare in several regions of Syria, including Idlib and adjacent swathes of the northwest, the most populous opposition-held area.

Meanwhile, the Assad regime has reportedly opened a land corridor through the Hama-Idlib border allowing hundreds of Daesh terrorists - and large amounts of military equipment - to enter Syria's Idlib province.

Local sources also reported that, while crossing into southern Idlib, Daesh militants had carried out a surprise attack on opposition positions in the area.

Although the militants were eventually repulsed, Daesh reportedly remains in control of several small villages in the area, which continues to witness sporadic clashes between the terrorist group and opposition forces.

"[Turkey's deployment is] in line with the Astana six's resolutions to ensure the area is protected from Russian and regime bombing and to foil any attempt by separatist YPG militias to illegally seize any territory," said Sejari.

Idlib, located in northwestern Syria on the Turkish border, faced intense attacks by the Syrian regime after a vicious civil war broke out in 2011. After March 2015, Idlib was no longer under the control of the Syrian regime and was dominated by military opposition groups and anti-regime armed organizations.

With a previous population of around 2.5 million, the city is now crammed with about 4 million people following the arrival of civilians who fled violence in central Syria. The most effective military opposition groups in Idlib, Ahrar al-Sham and Tahrir al-Sham, both withdrew from the city nearly three months ago. Idlib is currently governed by a local council headed by civilians. The Syrian Interim Government provides the services that the council offers the public. There are no armed groups or organizations in the city, rather, these elements are currently based in rural areas and checkpoints set up around the city. In recent months, the influence of Tahrir al-Sham has increased in the area. There are also many local groups in Idlib operating under the umbrella of the FSA.

Following the Idlib operation, Turkey aims to contain the Afrin region, which is controlled by the PYD, the PKK affiliate in Syria, and its YPG militia.

The operation is the second time in over a year that the Turkish military has crossed into Syria. The first, Operation Euphrates Shield, was launched on Aug. 24, 2016, in collaboration with the FSA and helped liberate several Daesh strongholds, such as Jarablus, Dabiq, al-Rai and al-Bab.

In the operation, a staggering blow was dealt to Daesh, and more than 2,000 square kilometers in northern Syria were seized. More than 100,000 Syrian refugees returned to their hometowns in liberated areas.