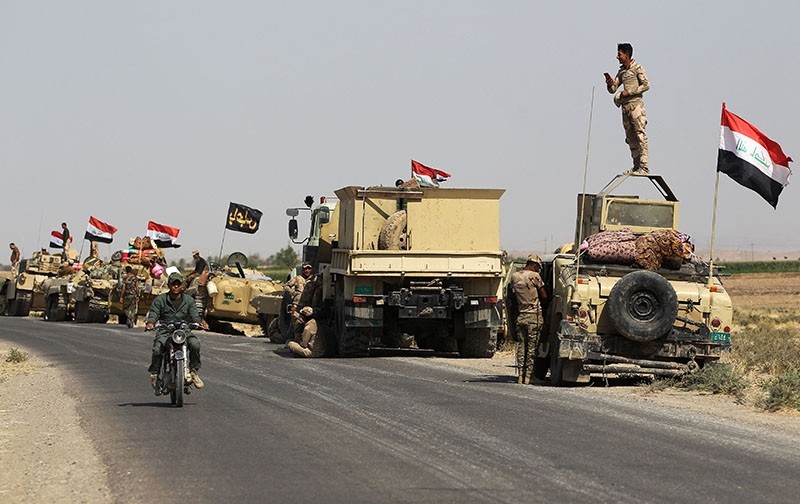 Iraqi forces rest on the road as they drive towards peshmerga positions on October 15, 2017, on the southern outskirts of Kirkuk (AFP Photo)
by Daily Sabah with Agencies Oct 15, 2017 12:00 am

The Iraqi central government accused Kurdistan Regional Government (KRG) authorities in northern Iraq of bringing PKK to Kirkuk, saying that the involvement of the terrorist group is "declaration of war."

In a statement published after a meeting chaired by Prime Minister Haider al-Abadi and attended by top military and security commanders, the government reiterated once again that it wants KRG-held Kirkuk and other disputed areas under its authority and that it will seek to impose its authority over those areas.

"This is a declaration of war against other [non-Kurdish] Iraqis and legal security forces," it added.

The council also cited other grounds for criticizing the KRG's military move.

Meanwhile, an aide to the KRG President Barzani denied the accusations, saying that the PKK has no presence in Kirkuk.

In June 2014, the Kurdish Peshmerga forces moved onto a number of strategic positions in Kirkuk when the Daesh terrorist group swept through northern Iraq and the army collapsed.

Tension has been on the rise between Irbil and Baghdad since last month when the KRG held an illegitimate referendum on the independence of the Kurdish region.

The Sept. 25 illegitimate poll was strongly opposed by most regional and international actors -- including the U.S., Turkey, and Iran -- who warned that it would distract from Iraq's fight against terrorism and further destabilize the region.

The Iraqi parliament has approved a set of measures against the Kurdish region, including the deployment of federal forces in disputed areas, including Kirkuk.