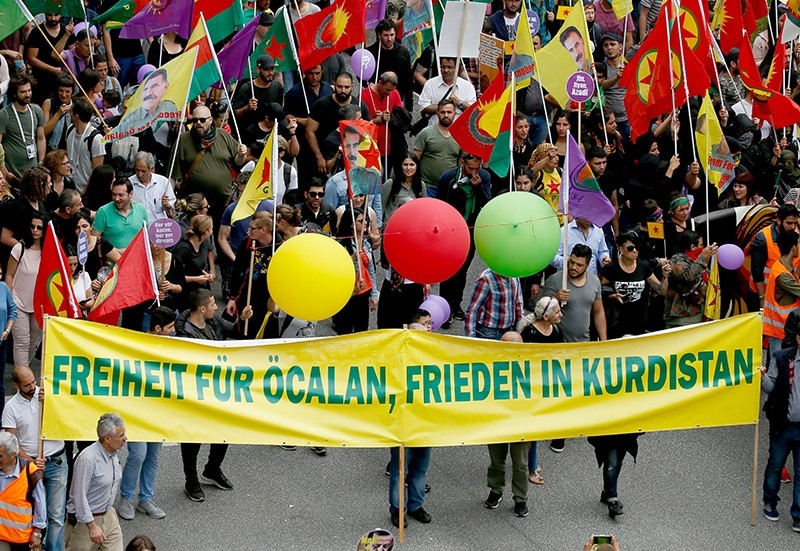 Presidential spokesperson Ibrahim Kalın slammed Germany on Tuesday for allowing sympathizers of the PKK terrorist group to organize a rally in Frankfurt.

In a post shared on his official Twitter account, Kalın criticized a previous tweet by the Frankfurt police, which was interpreted as an open support to the PKK rally and caused uproar among the Turkish-origin population in Germany.

"We are here for you tonight at the demonstration with the theme: 'Freedom for Öcalan - Peace in Kurdistan," read the tweet posted by the Frankfurt police.

Meanwhile, the Turkish Consulate General in Frankfurt also criticized local police for not trying to stop pro-PKK protestors during the rally on Monday, which called for the release of imprisoned PKK leader Abdullah Öcalan.

Karartı told an Anadolu Agency correspondent that they have conveyed Turkey's protest, and called on German authorities to take necessary measures against terrorism propaganda and impose a ban on PKK symbols.

Up to 500 pro-PKK demonstrators gathered at Kennedy square in Frankfurt on Monday, and shouted anti-Turkey slogans, without any confrontation from the police.

Germany's reluctance to take serious measures against the activities of PKK has been a major source of tension between the two NATO allies.

While it was banned in 1993, the terrorist organization is still active in Germany, and carries out significant propaganda, recruitment, and fund-raising activities.

The group has nearly 14,000 followers among Germany's Kurdish immigrant population, according to the German domestic intelligence agency BfV.

The PKK -- listed as a terrorist organization also by the U.S. and the EU -- resumed its armed campaign in July 2015.