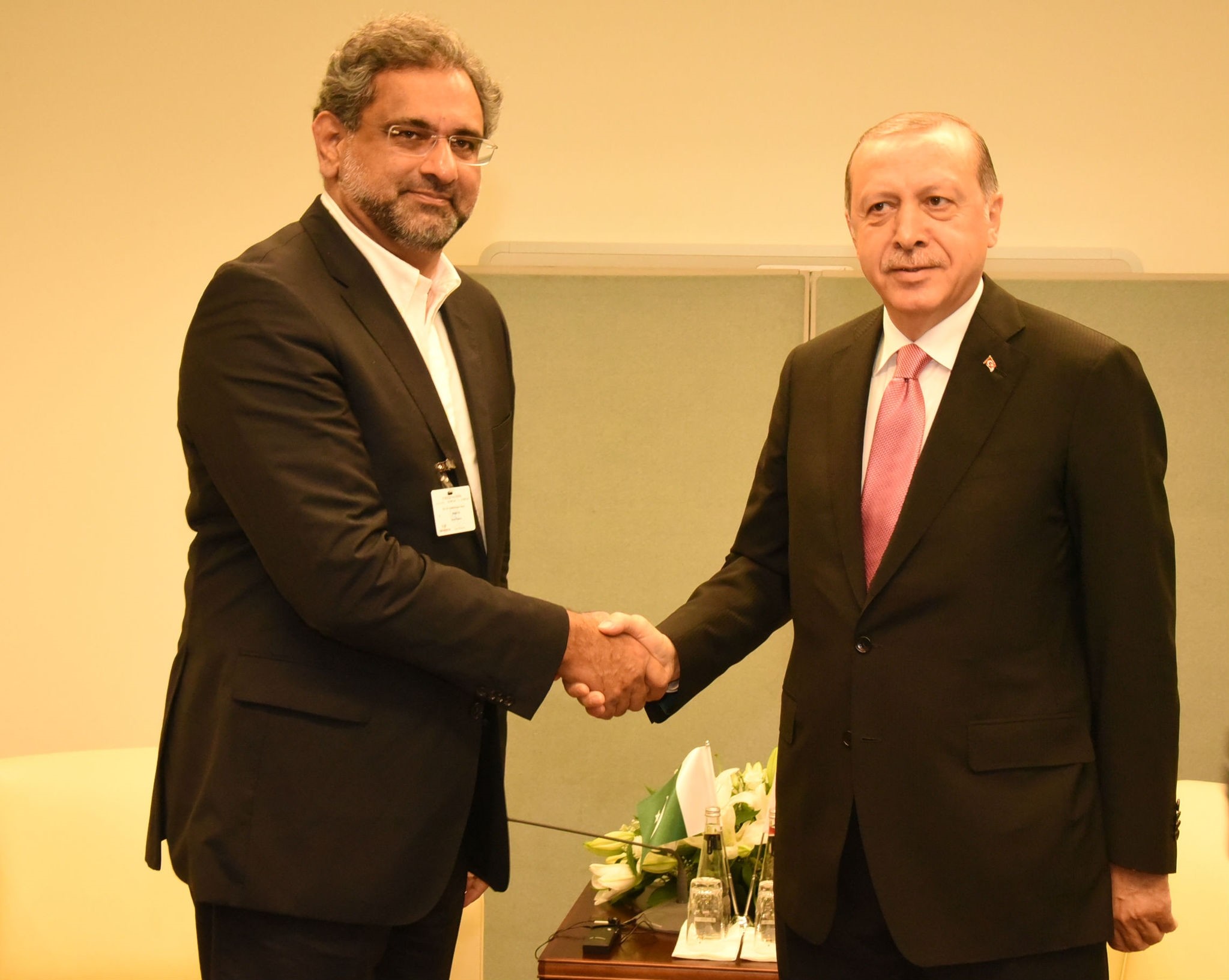 Visiting Turkey for the 9th summit of the Developing 8 (D-8), Prime Minister Abbasi said the relations between the two countries are based on mutual trust that is growing in all domains, including politics, economy, culture and defense.
by Yunus Paksoy Oct 20, 2017 12:00 am

Pakistan is in complete solidarity with Turkey in battling FETÖ and extends its full support to the country to eradicate the terrorist group entirely, Pakistani Prime Minister Abbasi has said

Islamabad is adamant about eliminating any terrorist activity that targets the interests of Turkey; as a result, the Pakistani government has been doing its part to obliterate the roots of the Gülenist Terror Group (FETÖ) in the country, Pakistani Prime Minister Shahid Khaqan Abbasi said. Speaking to Daily Sabah in an exclusive interview prior to the ninth summit of the Developing 8 (D-8), Pakistani Prime Minister Abbasi stressed that his country is "in complete solidarity with the brotherly people and leadership of Turkey in the wake of the heinous coup attempt on July 25, 2016." He said that Islamabad was one of the first to condemn the Gülenist coup attempt at the time.

Acknowledging, "Pakistan is cognizant of Turkey's concerns regarding FETÖ affiliated entities," the Pakistani prime minister asserted that his government is "determined not to allow anyone to act against Turkey's interests."

Aware of the vast FETÖ threat across Pakistan, the prime minister said, "My country is extending all possible support and help in eradicating the roots of FETÖ in Pakistan."

Earlier this week, Pakistan deported a senior FETÖ member operating in the country. Mesut Kaçmaz, former head of a Pakistani school run by FETÖ, was deported to Turkey where he is wanted on terrorism charges.

Turkey and Pakistan stand out in their respective regions for their enthusiasm to develop indigenous defense systems and their eagerness to embark on new alliances. Abbasi emphasized that strengthening capabilities for indigenous defense production is a strategy shared by both Ankara and Islamabad.

"Our relations are growing in all domains, including politics, economy, culture and defense. A distinct characteristic of our defense collaboration is that these ties are based on mutual trust as both the nations understand each other's needs and always support each other when required. … Our shared objective is to strengthen our respective capabilities for indigenous defense production," Abbasi said.

Underlining that the close collaboration between Turkey and Pakistan in the area of defense has shifted to a whole new level in recent years, Abbasi said: "This collaboration has acquired new levels in recent years. The High Level Military Dialogue Group [HLMDG], with significant representation from the defense sectors of both countries, meets regularly and chalks out strategies and initiatives for defense collaboration. The defense industries of Pakistan and Turkey have significant capacities and complementarities, from which both sides are working to draw beneficial results."

Referring to recent bilateral agreements, such as the one signed in May 2017 in which Turkey is acquiring 52 Super Mushshak training aircraft from Pakistan, Abbasi said, "Turkey has thus become the largest buyer of our trainer aircraft."

Prime Minister Abbasi said Ankara and Islamabad "are working on the project for four MİLGEM Ada class corvettes," which is to be completed through technology transfer. Touching on cooperation in the aerial area, Abbasi said: "The Pakistan Aeronautical Complex [PAC] and Turkish Aerospace Industries (TAI) have committed to strengthening mutual collaboration in the aviation field. All these initiatives come on top of the earlier projects which included midlife up gradation of Pakistan's F-16s in Turkey."

Drawing attention to the independence referendum held by the Kurdistan Regional Government (KRG) on Sept. 25, which is staunchly opposed by the Turkish government, Prime Minister Abbasi said his government "is deeply concerned over the recent referendum held in the Iraqi Kurdistan region, and we fully support Iraq's unity, sovereignty and territorial integrity."

He leveled criticism at the Iraqi Kurdish autonomous administration, saying that the referendum is not legitimate. "We believe that this referendum lacks legitimacy as it is against the constitution of Iraq," Abbasi said, adding, "We hope that the administration of the KRG will exercise caution and not press its demand for independence and will remain within the sovereign Iraqi state."

Ankara has also been voicing grave concerns with regards to the KRG independence referendum. President Recep Tayyip Erdoğan, both prior to the vote and afterward, warned KRG President Masoud Barzani that there would be consequences as a result of the autonomous administration's insistence on proceeding with the independence process.

Quality of political relations not reflected in economic ties

The Pakistani prime minister also commented on economic relations between Turkey and Pakistan. When reminded of the bilateral trade volume between the two countries, which amounted to roughly $600 million in 2016, Abbasi said, "The quality of our excellent political relations undoubtedly is not reflected in our economic ties."

Underscoring that both sides want to boost bilateral trade, the Pakistani prime minister said: "One encouraging sign is the growing Turkish investment in Pakistan, which has crossed the $1 billion mark. There is a growing participation of Turkish companies in wind and solar energy, transportation and municipal services projects in Pakistan."

Abbasi declared, "Pakistan and Turkey are also negotiating a comprehensive, bilateral free trade agreement (FTA) covering trade in goods, services, and investment." Expressing his hope that the FTA will pay out dividends for both sides, he said, "I believe that by concluding the FTA on a mutually beneficial, win-win basis, our economic relations would register significant growth and bring those at a par with our political relations."

Similar to the relatively disappointing failure of both countries in enhancing economic ties to a level that the two countries would favor, bilateral cultural ties have not flourished either. When asked about the low number of Pakistani tourists visiting Turkey last year, which was around 50,000, Abbasi said, "Enhancing cultural collaboration and people-to-people contacts is among the key priorities of both the Pakistan and Turkish governments."

Saying, "The role of Parliament, media, youth, think-tanks, and civil society is important," the prime minister added, "It is heartening that more and more Pakistanis are selecting Turkey as their tourist destination."Abbasi proposed, "A Turkish Airlines decision to offer a layover in Turkey for Pakistani travelers would exponentially increase the existing numbers." Underscoring "Pakistan is also blessed with unmatched natural beauty and has a rich cultural heritage, including a Turkish/Mughal heritage," the Pakistani prime minister invited Turkish citizens to visit his country. "We would welcome more Turkish tourists in Pakistan and avail our hospitality," he added.