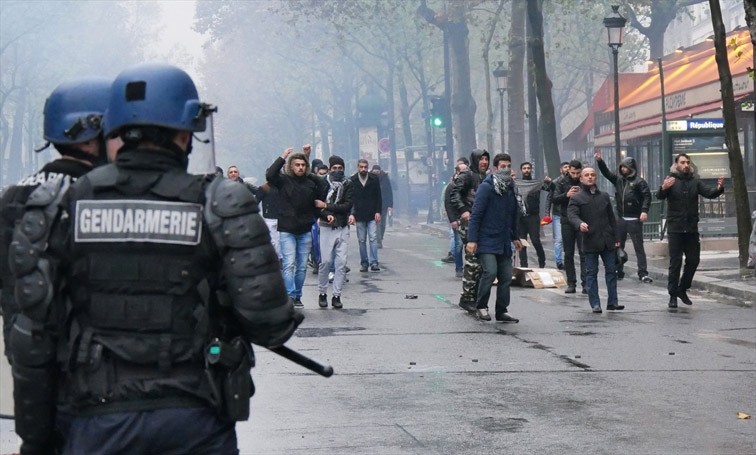 The youth branch of the PKK in Europe, which has held dozens of demonstrations across European cities over the past week, has announced it will carry out revenge attacks on Turkish institutions and establishments with links to the ruling Justice and Development Party (AK Party) and the Nationalist Movement Party (MHP) in Europe. The terrorist group claimed that neither "the capitalist modernity of Europe nor any fascist structure" will be able to stop the planned terrorist attacks. In a statement released on the Netherlands-based PKK media outlet ANF and several other pro-PKK portals, the Apoist Youth Initiative Europe (AGİA) defines all European cities as "resistance zones" where it will start its "indefinite activities."

Calling on all PKK supporters to join in attacking "all Turkey-linked institutions," the group demanded the release of imprisoned PKK leader Abdullah Öcalan. "No single institution of the Republic of Turkey should be able to live on. All cities should be turned into a resistance zone."

Time for Europe to clamp down on PKK

The European Union has faced some heavy criticism for its apparent lack of concern over the PKK's acts of terrorism in Turkey and the group's activities in Europe. Turkish and EU officials are to hold a counterterrorism meeting in Ankara next month in which the Turkish delegation will bring up the issue of the PKK's freedom in Europe. When Daily Sabah asked about the claim that the bloc will take action to ban symbols related to the PKK, officials from the European Commission did not respond.

In addition to complete tolerance of the PKK in EU member states, some countries took certain steps Ankara called "scandalous."

The police department in Frankfurt, Germany on Monday shared a post on its official Twitter account promoting the PKK and its leader. "Tonight, we are demonstrating for you with the mission 'Freedom for Öcalan – Peace in Kurdistan,'" the tweet read.

Last month, Ankara criticized a Belgian court's decision to reject a legal objection to an earlier ruling that decided PKK activities in Europe could not be classified as terrorism, saying the court battle over the arrest of terrorists has not ended yet. The statement released by the Foreign Ministry said the court decision was an example of Belgium's support for a terrorist group undermining Turkey's security, and "proved" that the European country is "the weakest link" in the fight against terrorism in Europe and around the world.