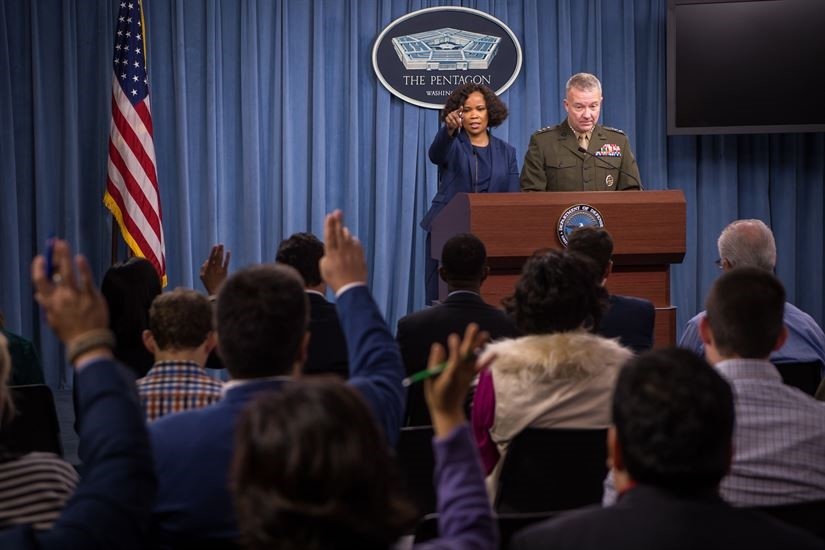 The U.S. declined to directly comment Friday on the unveiling of a huge banner of jailed terror leader Abdullah Öcalan by the PKK-affiliated People's Protection Units (YPG)-dominated Syrian Democratic Forces (SDF) in the Syrian city of Raqqa.

The Democratic Union Party (PYD) and its armed wing YPG, the Syrian branch of the PKK, which has waged war against Turkey for more than 30 years, was among the U.S.-backed SDF to take Raqqa from Daesh earlier this week.

The taking of the eastern city -- considered Daesh's de facto capital -- was marked by the unfurling of a huge banner bearing the terrorist leader's image in the main square.

Questioned about "a victory enabled by the U.S. that is dedicated to a terrorist group," Pentagon spokeswoman Dana W. White declined to comment directly.

"We work with the SDF," she told a news conference. "And we work to help them focus on fighting ISIS [Daesh]. That is our sole responsibility. That's our sole commitment. And we'll continue to work by, with and through the SDF to ensure that we defeat ISIS."

However, a U.S.-led coalition spokesperson later told the press that the coalition was aware of the reports of celebration and displays of Öcalan symbols in Raqqa, saying it does "not approve of the display of divisive symbols and imagery at a time in which we remain focused on the defeat of Daesh in Syria."

Meanwhile, Prime Minister Binali Yıldırım criticized the U.S. Friday for cooperating with terrorist groups and endangering Syria's future and said that the poster has proven Turkey's point regarding YPG.

"What does the U.S. want to see to comprehend that the PYG and PYD are terrorist organizations?" Yıldırım said, adding that U.S.' cooperation with such groups damages relations between the two countries.

The U.S. has supported the SDF, which consists of the PKK/PYD and other groups, in fighting Daesh in Syria but has largely ignored its links to the PKK, which the U.S., EU and Turkey list as a terrorist group.

In a declaration of victory in Raqqa, the PKK/PYD also released a video dedicating the triumph to Öcalan, who founded the PKK in 1978. The terrorist leader was jailed for treason in Turkey in 1999.

Since the PKK launched its terror campaign in Turkey in 1984, tens of thousands have been killed.

Turkey has criticized the U.S. for cooperating with a terrorist group to replace another one. President Recep Tayyip Erdoğan has highlighted that the U.S. contradicts the NATO alliance by supporting terrorist groups.

Turkey considers the PKK's Syrian offshoot the Democratic Union Party (PYD) and the YPG to be affiliates of the PKK, a proscribed terrorist organization according to the U.S., Turkey and the EU. The U.S. and the EU do not share Ankara's concerns regarding the YPG. Continuous U.S. support for the YPG has caused tensions in relations between Washington and Ankara while the former says that supporting the YPG is the only option to defeat Daesh and the latter says an alternative could be found with local Arab tribes, backed by countries in the region, rather than supporting and arming "a terrorist group."