US caught red-handed in Raqqa over banner of PKK leader, Erdoğan says 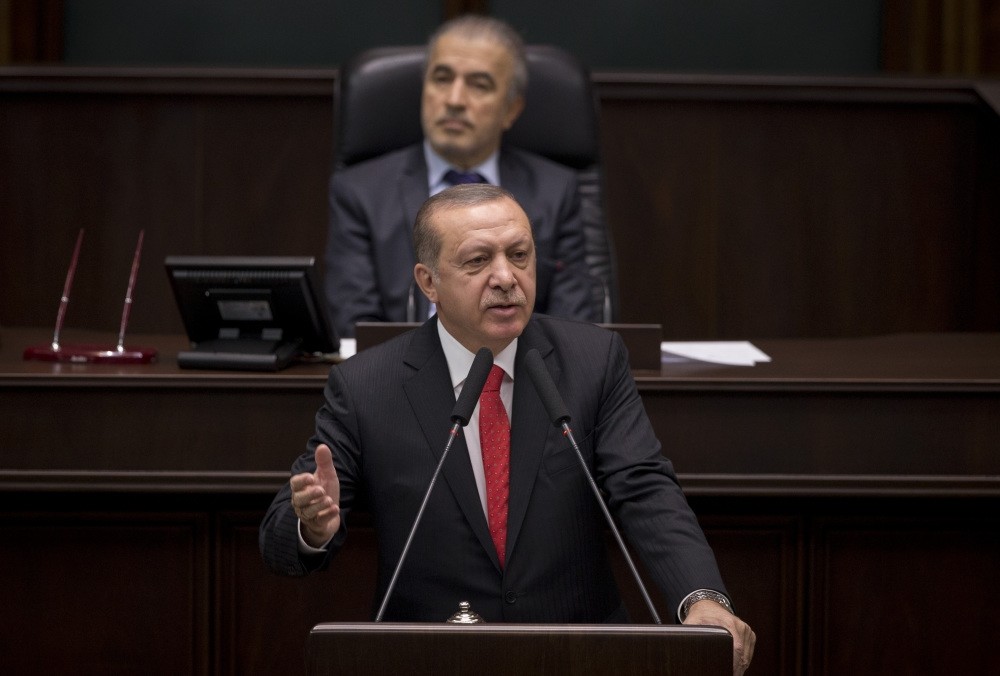 The U.S. supported YPG terrorists in Syria despite the group's clear link with the outlawed PKK and now that they hung a banner of Öcalan in Raqqa, Washington has been caught red-handed, President Erdoğan says

President Recep Tayyip Erdoğan Tuesday criticized the Trump administration for its continuous support of the PKK terrorist organization's Syrian affiliate, the Democratic Union Party (PYD) and its armed wing the People's Protection Units (YPG), saying that the U.S. has ignored the fact that there is no difference between the PKK and the PYD/YPG in Syria, despite Ankara's repeated warnings. Erdoğan's comments came after YPG terrorists hung a poster of the PKK's imprisoned leader Abdullah Öcalan following the liberation of Syria's Raqqa from the Daesh terrorist group.

"They [the U.S.] provide arms support for separatist terror groups with different names," President Erdoğan said during the Justice and Development Party's (AK Party) parliamentary group meeting in Ankara, as the U.S. says it supports the Syrian Democratic Forces (SDF), which is dominated by the YPG.

"The truth is evident. Our strategic partner, the U.S., carried out the Raqqa operation with the YPG despite our objections. They said that the YPG and the PKK are not the same. Now, how can they explain Öcalan's [the PKK's leader's] poster in Raqqa? The U.S. delivered more than 3,500 truckloads of weapons to the region. We know where they were used," the president added.

After the scandalous poster incident in Raqqa, the U.S. Embassy in Ankara had said that the PKK is a terror organization and that Öcalan is not someone to be respected.

"The PKK is listed among foreign terror organizations. Öcalan has been jailed in Turkey for his actions related to the PKK. He is not a person to be respected," a statement by the U.S. Embassy said.

"They [the U.S. authorities] try to save themselves by saying he [Öcalan] is not worth respect now that they are caught red-handed in Raqqa," Erdoğan said in response.

Continuous U.S. support for the YPG has stirred up tensions between Washington and Ankara. While Washington has insisted that the PKK and the PYD/YPG are two different organizations and that supporting the YPG is the only option for defeating Daesh, Turkey, on the other hand, has said that rather than supporting and arming a "terrorist group," an alternative could be found with local Arab tribes, backed by other countries in the region.

Rejecting the response of the U.S. Embassy, the YPG released on Sunday a video saying that without the ideologies of the PKK's convicted leader Abdullah Öcalan, the YPG would not be what it is today. In the controversial video, YPG terrorists credited Öcalan's "ideology" to its battle against Daesh in Raqqa and rebuffed U.S. criticism.

"All the victories, developments and gains achieved here are the results of a great battle that is based on [the] opinions and philosophy [of Öcalan]. If his ideological power hadn't been with us, we wouldn't have known what to do in such situations," a YPG terrorist said in the video.

President Erdoğan also called on the people of the region to put aside ethnic and sectarian differences, as well as short-term interests, stressing that separatist movements will not benefit the region. "As long as we continue to be cruel to each other, the cries would be in Arabic, Turkish, and Kurdish. I leave it up to my people to realize what the language of the victors would be," Erdoğan said.

"Twenty-five percent of Syria is in the hands of the PYD/YPG and 10 percent is controlled by Daesh terrorists. The [Assad] regime, which considers itself to be the owners of the land, is unable to control more than half of the country, despite strong Russian support. The moderate opposition controls about 20 percent. Who would such a Syria be beneficial to? It is certain that it does not benefit the Syrian people," Erdoğan said, underscoring the importance of the country's territorial integrity.

During his speech, the AK Party chairman also criticized the West for their lack of support over Turkey's fight against the PKK and the Gülenist Terror Group (FETÖ) within the borders of European countries.

"The PKK organizes rallies in Germany, the German police release messages saying, 'We are on duty for you.' In France, the police watch them. What happened to the PKK being a terror [organization]? Why do you allow them? Isn't this our right to ask this question?" Erdoğan asked.