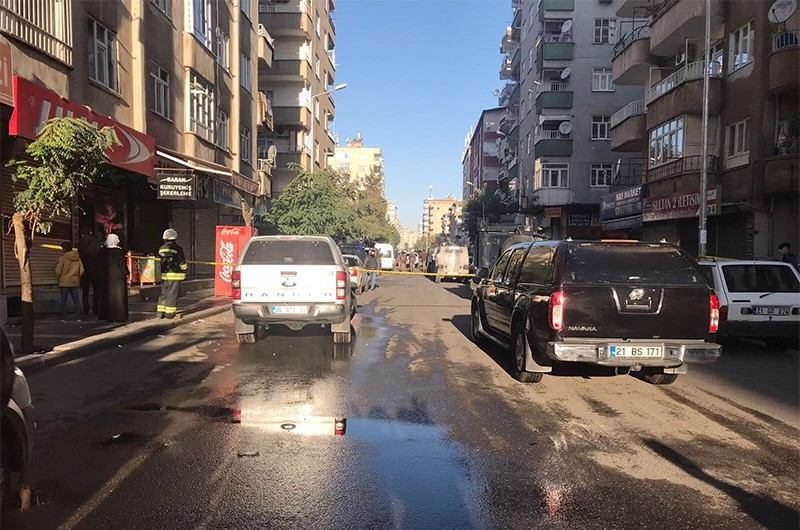 One police officer was killed, nine others were injured in counterterror operations against the PKK in Turkey's southeastern Diyarbakır province, reports said Friday.

According to reports, the police were carrying out air-supported raids against an apartment building used by a PKK cell in Diyarbakır's Kayapınar district.

Ahmet Alp Taşdemir, a member of the National Police Department's elite Special Operations unit, was accompanying fellow officers who stormed a PKK hideout in the southeastern city of Diyarbakır when he was shot. Nine others were wounded in the shootout between the militants and the police.

Officials said the terrorist hiding out in the house was killed in the operations. They said the killing of Taşdemir and other casualties stemmed from the police's efforts to not harm the "human shields" in the house, one woman and three children. All four escaped uninjured. The militant, identified as Murat Çelik, was a member of the PKK's "youth wing" according to authorities.

A PKK terrorist was also killed in the operation.

Just as military officials were heading to the family home of Taşdemir in western Turkey, families in other parts of Turkey struggled with heavy hearts as they prepared their loved ones for funerals. The victims were six military personnel and two village guards, part of a paramilitary force fighting the terrorist group in eastern and southeastern Turkey.

They were killed when PKK militants attacked their unit in Şemdinli, on the border with Iraq, on Thursday. Authorities announced that 46 militants from the terrorist group were "neutralized" across three provinces, Hakkari where Şemdinli is located, Tunceli and Şırnak.

While addressing an event on Friday, Prime Minister Binali Yıldırım said Turkey would "terminate" all terrorist groups. "We will not surrender Turkey to terrorism. This nation stopped the invasion of the country in World War I, and stopped tanks and warplanes on July 15 [during last year's coup attempt] with its faith. Let those traitors know that they won't be able to grab even a piece of land from this country. This nation stands undefeated," Yıldırm said in an emotionally charged speech.

The PKK has avoided direct confrontation with the Turkish military since the early 2000s and usually carried out hit-and-run attacks, but the southeastern Turkish region's proximity to PKK camps and geographical conditions has allowed the terrorist group to mass its militants in a single location.

Thursday's incident was the first direct PKK attack on Turkish soldiers in months amid efficient operations and superior firepower in the countryside. The terrorist group frequently targets the military and police with bomb traps or suicide attacks, while kidnapping or murdering public servants and civilians.

Founded in 1978, the PKK has waged a decades-long bloody campaign against Turkey. The group, listed as a terrorist organization by Turkey, the U.S. and the European Union, resumed its armed campaign in July 2015 after a brief reconciliation period. Since that time, the PKK has been responsible for the deaths of some 1,200 security personnel and civilians, including women and children, while more than 4,000 security personnel and over 2,000 civilians have been injured. More than 12,000 PKK terrorists were also killed in the same period.

The Turkish military occasionally conducts operations in northern Iraq, a place ruled by the Kurdistan Regional Government (KRG) which recently voted for independence from greater Iraq.