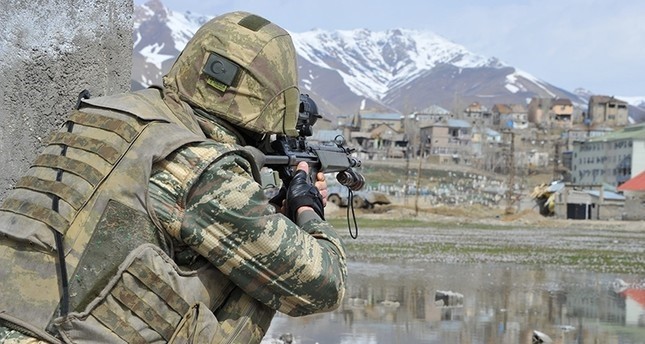 A total of 2,304 PKK terrorists have been killed in anti-terror operations in the past 11 months, Defense Minister Nurettin Canikli said Thursday.

"The number of [the PKK] terror organization members neutralized since Jan.1, 2017 is 2,304. This really is one of the best results showing how successful our fight [against terrorism] is," Canikli said.

When asked about AT4 anti-tank weapon seized during a recent anti-terror operation in Hakkari, the defense minister said Turkey believed it was supplied to the terrorists by the U.S.

As part of its anti-Daesh campaign in Syria, the U.S. has been distributing arms to the Syrian Democratic Forces (SDF), which is dominated by the PKK's Syrian offshoot the Democratic Union Party (PYD) and its armed wing People's Protection Units (YPG).

Founded in 1978, the PKK has waged a decades-long bloody campaign against Turkey. The group, listed as a terrorist organization by Turkey, the U.S. and the EU, resumed its armed campaign in July 2015 after a brief reconciliation period. Since that time, the PKK has been responsible for the deaths of some 1,200 security personnel and civilians, including women and children, while more than 4,000 security personnel and over 2,000 civilians have been injured.

Speaking about Turkey's process of setting up observation points in Syrian province of Idlib, Canikli said that Turkish soldiers were in the area to bring peace and stability.

"Before directly doing it with weapons, we are first using all the other methods. The current stage is quite satisfactory at this point. Setting up of observation points will accelerate in the next stage," Canikli added.