Stay away from FETÖ terrorists, PM Yıldırım tells US Muslims 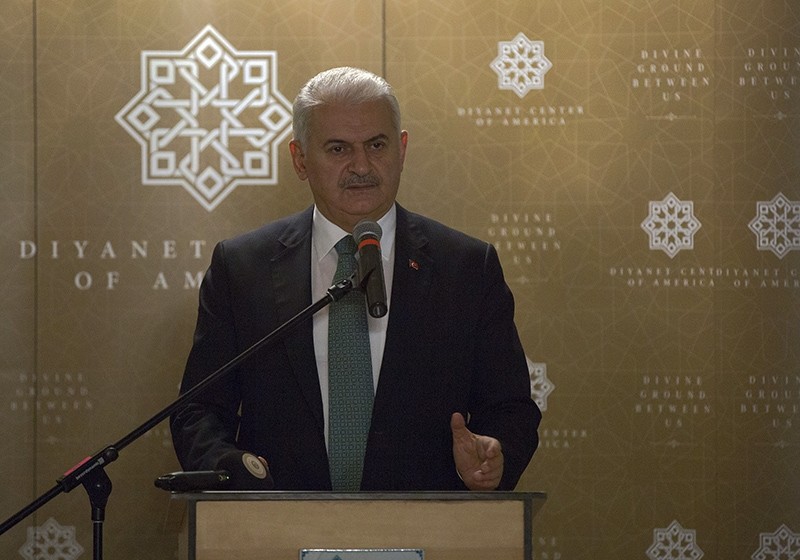 There is no difference between Daesh and the Gülenist Terror Group (FETÖ), said Turkish Prime Minister Binali Yıldırım on Thursday, adding that both terror groups flout the sacred values of Islam.

Both terrorist groups have threatened the peace in Muslim countries, Yıldırım told a crowd in a speech at the Diyanet Center of America (DCA), also known as the Turkish-American Community Center and Mosque Complex in Lanham, Maryland.

The Turkish premier decried how FETÖ leader Fetullah Gülen, who masterminded last year's deadly coup attempt in Turkey and is still living in the U.S., has corrupted and fooled many Muslims by presenting himself as "moderate Muslim".

"The leader of the Fetullah Terrorist Organization is no cleric, he is a bloody terrorist," Yıldırım said.

"FETÖ's main goal was to infiltrate the Turkish state and put it under his control," he added.

"And they killed Muslims to reach their goal," he added, referring to the July 15, 2016 deadly coup attempt which martyred 250 people and left some 2,200 others injured.

He warned Muslims living in the U.S. to "stay away from schools and cultural centers affiliated with the FETÖ network."

"Don't take FETÖ supporters among you and don't allow them to mislead you," he added.

Yıldırım said that since the coup bid, the Turkish government has continued "to decipher the secret structures of this bloody terrorist organization within the bounds of law."

They should pay the price for every single act of evil they did to Turkey, he stressed.

The FETÖ terrorist group has lost its influence in Turkey but still continues to carry out a dark campaign against Turkey on an international scale, said Yıldırım.

"Citizens in our country know about the misinformation games played by FETÖ terrorists. I also know that our citizens living abroad aren't fooled by these games either," he added.

Ankara has been seeking the extradition of Fetullah Gülen from the U.S. since last year's attempted coup.

Gülen has been indicted in several cases relating to the defeated coup bid in Turkey.

Yıldırım is expected to discuss the extradition issue with U.S. Vice President Mike Pence on Thursday at the White House, and to press for quicker action on the issue.