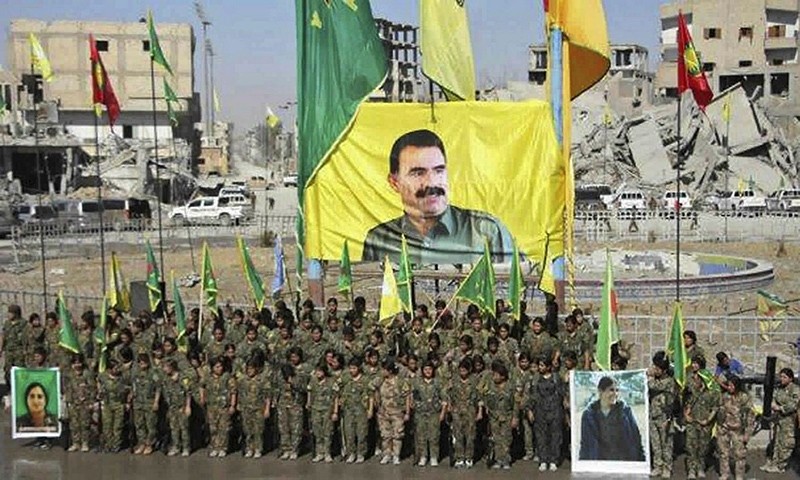 PKK female terrorists celebrating the victory against Daesh in Raqqa, Syria under the portrait of PKK leader Abdullah u00d6calan.
by Daily Sabah Nov 14, 2017 12:00 am

"The YPG terrorists let Daesh [terrorists] leave Raqqa with their weapons instead of eliminating them from the city. One terror group left Raqqa and another settled in. Is this your rational policy?" Yıldırım said during a parliamentary group meeting of Justice and Development Party (AK Party) in Ankara.

The U.S.-backed Syrian Democratic Forces (SDF), which is dominated by the PKK terrorist group's Syrian offshoot the Democratic Union Party (PYD) and its armed wing YPG, announced liberation of once Daesh "capital" Raqqa on Oct. 17.

Yıldırım stressed that Turkey has repeatedly warned the U.S. not to collaborate with a terrorist group to fight another terrorist group, saying that such cooperation was unbefitting of states.

"Now we see the results. The freed Daesh members will be the reason for deaths of innocent people in every corner of the world, including Turkey, Europe and America," the prime minister said, adding that it is important for states to cooperate on fighting terror.

A BBC report released Monday revealed a secret deal between the SDF and Daesh terror group to help thousands of Syrian and foreign fighters and their families escape from Raqqa along with their weapons and ammunition.

According to the report, the evacuation convoy consisted of nearly 50 trucks and 13 buses, along with more than 100 vehicles belonging to Daesh terrorists. Ten trucks were loaded with weapons and ammunition.

When asked about the report, the U.S. Department of Defense Spokesman on Iraq and Syria said Washington respected the agreement.

Turkey and the U.S. have been at odds in their policies in Syria. The U.S. support for the SDF have caused the strained relations between the two NATO allies.