Daesh members freed by US, YPG may pose grave threat 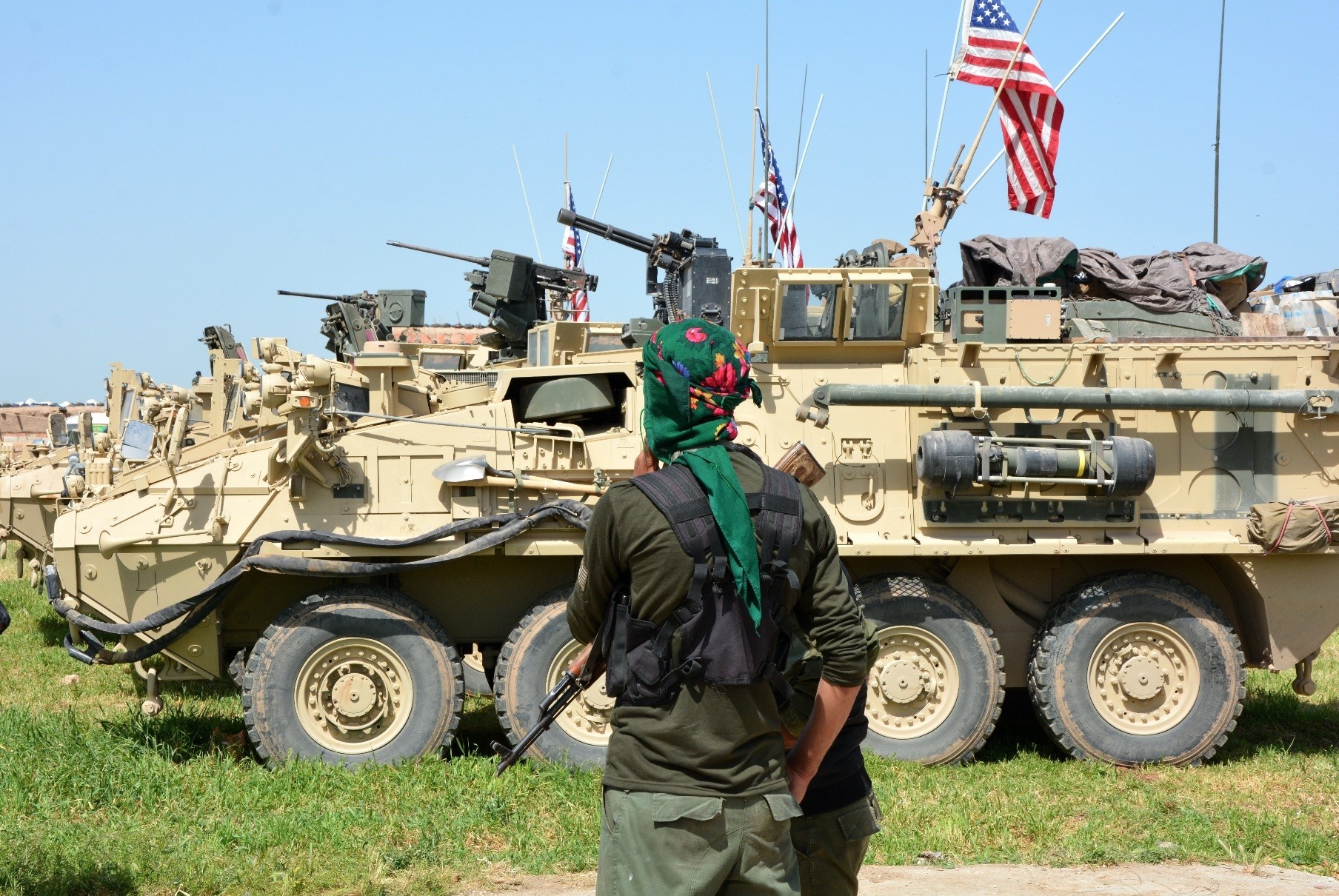 YPG terrorists stand next to U.S. eight-wheeled armored vehicles, near al-Ghanamya, al-Darbasiyah at the Syrian-Turkish border, April 29.
by Mustafa Kırıkçıoğlu Nov 15, 2017 12:00 am

A once denied secret deal between the YPG and Daesh on the evacuation of Daesh militants, including some of its most notorious leaders, from Raqqa under the supervision of the U.S.-led coalition has been brought to light in a recent BBC report, and while Turkey and Russia lambasted the U.S. for allowing such a deal, experts say the freed Daesh foreign militants may pose great danger around the world by organizing new attacks on civilians

A U.S.-led coalition and Syrian Democratic Forces (SDF) deal with the Daesh terrorist group to allow the evacuation of thousands of militants, including some of the most notorious, and their families from Raqqa could pose a grave threat to all countries, experts said. A BBC report revealed the details of the agreement between the SDF - which is predominantly led by the PKK's Syrian wing, People's Protection Units (YPG) - and Daesh under the supervision of the U.S.-led coalition to arrange the evacuation of nearly 4,000 people with 10 trucks loaded with weapons and ammunition on Oct. 12. The report contains secret footage, interviews with drivers who transported the militants and some Syrians, including a shopkeeper and a smuggler, who spoke on condition of anonymity.

Can Acun, a Middle East expert for the Ankara-based Foundation for Political Economic and Social Research (SETA), told Daily Sabah that recently intensified operations on Daesh in all regions of Turkey could be related to curbing the militants who possibly illegally entered the country from Syria.

Turkish security forces have clamped down on Daesh suspects across the country, with hundreds of people detained in operations in recent months.

"Even though a considerable part of the Turkish-Syrian border, around 550 kilometers, is protected with a border wall and security measures are tightened, these militants can infiltrate Turkey, as we share a very long border with Syria," Acun said.

According to the drivers, SDF members said the job would take six hours to take hundreds of displaced families as a result of the Raqqa offensive from the town of Tabqa on the Euphrates River to a camp further north. Instead, they carried Daesh militants and their families and tons of ammunition into the desert.

Some of the militants reportedly spread out across Syria after the evacuation, and others, especially foreign fighters who had fought in the ranks of the terrorist group, contacted smugglers to return to their countries.

The BBC report conflicted with a previous statement from officials involved in Operation Inherent Resolve (OIR), the U.S.-led coalition against Daesh, regarding civilian evacuation.

On Oct. 14, the coalition released a statement, which indicated nothing about evacuated foreign fighters and Daesh leaders but "rescuing trapped civilians."

"A convoy of vehicles is staged to depart Raqqah Oct. 14 under an arrangement brokered by the Raqqa Civil Council and local Arab tribal elders on Oct. 12. The arrangement is designed to minimize civilian casualties and purportedly excludes foreign Daesh terrorists as people trapped in the city continue to flee the impending fall of Daesh's so-called capital," the statement said.

After the extent of the deal was revealed, OIR spokesman Col. Ryan Dillon said the U.S. condoned the agreement. "This was a local solution to local issue. Coalition did not fully agree, but respected our partners decision," he said on Twitter.

"It reminds me of the post-war period in Afghanistan in the 1980s," Turan Kışlakçı told Daily Sabah, a Middle East expert and freelance journalist. "When Soviet troops withdrew, the fate of the foreign fighters who came from different parts of the world was heavily discussed. They couldn't return their countries, Libya, Algeria, Egypt as they were seen as 'terrorists.' Eventually, the U.S. and some European countries granted them citizenship, but afterwards, they were used in many terrorist attacks in different parts of the world" he said.

An SDF spokesman also said in October that a group of Syrian Daesh fighters "without foreign militants" had evacuated Raqqa overnight, taking civilians with them as human shields.

However, the BBC reported that the militants leaving Raqqa included foreigners from France, Egypt, Azerbaijan, Turkey, Pakistan, Yemen, China, Tunisia and other countries.

Kışlakçı said the evacuated militants pose danger for their home countries, adding that they also "can be canalized by some powers" to various countries, individually or in groups. "Ongoing speculations suggest that the militants may be transferred to Central Asia or Saudi Arabia 'to be used' for malignant purposes," he added.

The deal has received heavy criticism from Ankara and Moscow.

Speaking on the issue yesterday, Prime Minister Binali Yıldırım lambasted the U.S., saying evacuated Daesh members could be a cause of future attacks around the world.

"The YPG terrorists allowed Daesh to leave Raqqa with their weapons instead of eliminating them from the city. One terrorist group left Raqqa and another settled in. Is this your rational policy?" Yıldırım said during a parliamentary group meeting of the Justice and Development Party (AK Party) in Ankara.

"Now we see the results. The freed Daesh members will be the cause of deaths of innocent people in every corner of the world, including Turkey, Europe and America," he said.

The Russian Defense Ministry asserted that it has evidence of direct support of the U.S. to the Daesh terrorists in Syria and it avoided airstrikes during the evacuation, the TASS news agency reported yesterday.

"The Abu Kamal liberation operation conducted by the Syrian military with air cover by the Russian air force at the end of last week revealed facts of direct cooperation and support for Daesh terrorists by the U.S.-led international coalition," the agency quoted the Russian Defense Ministry as saying. The ministry showed photos from Russian unmanned aircraft on Nov. 9 that show kilometers-long convoys of armed Daesh groups leaving Abu Kamal toward the Wadi es-Sabha passage on the Syrian-Iraqi border to avoid Russian air strikes and the Syrian military.

However, it was later revealed that shared photos were taken from a trailer for a mobile game. The ministry eventually removed the photos from its social media accounts.